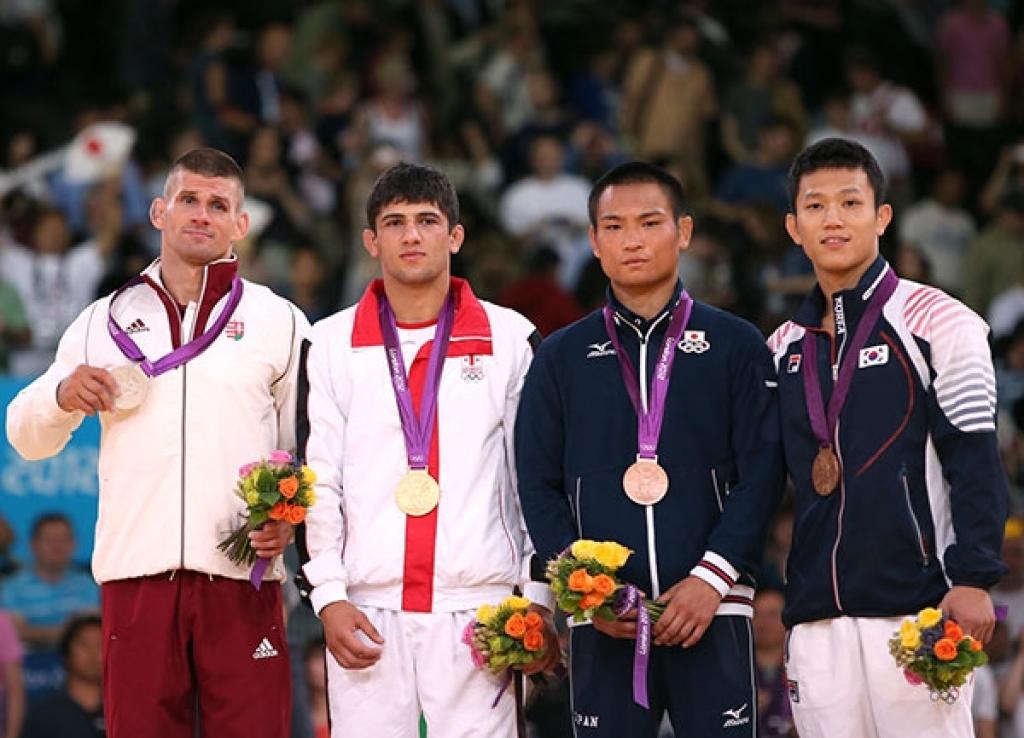 Europe has won a gold medal again. Who would have thought that 20-year youngster Lasha Shavdatuashvili would take the Olympic title? He did and Peter Seisenbacher his coach did and the fantastic Georgian supporters who almost made more noise than the Brits.

What a sensational evening with a European final against Miklos Ungvari, the 31-year old fighter from Hungary. An age difference of 11 years and in this case the younger judoka won. It is the third time in a row that Georgia won the Olympic title. In 2004 it was Zurab Zviadauri, in 2008 Irakli Tsirekidze and now Lasha Shavdatuashvili won the final. It took him not even a year to grow from a junior European title to the Olympic title, even faster than Ilias Iliadis (GRE).

Peter Seisenbacher (AUT) knows how to make a champion, job well done. The championmaker took the Olympic title himself twice.

The winner said: “Some months ago I could not even imagine taking part in the Olympic Games. I just have transferred from juniors. When I first started judo, my biggest wish was to participate in and to win the Olympic Games. It happened, because I concentrated on judo, I did not do many other things in my life. Right after I won the European junior championships, I moved up to the national senior team. I had very effective training camps in Korea, Japan and in European countries. I think that really helped me.”

On his strategy in the match:
“I was attacking and risking, because I did not care who my opponent was, if it was a world, European or Olympic champion. I wanted to show what I am made of.”

Also for Ungvari it was a great sensation to win a medal at the Olympic Games at this third Olympic Games. Sad to lose the final but proud to win the second medal for Hungary in two days.
Ungvari: “I am very disappointed not getting the gold but I am also very proud with silver. I’d like to thank my coach he supported me always, even under great pressure. I have 10 brothers and sisters and I’d like to thank them. “

For bronze Ebinuma came back and defeated Pawel Zagrodnik from Poland, he did well and fought back after a backdraft of a waza-ari.
Uriarte lost his bronze match against Jun-Ho Cho (KOR) by decision.
Shavdatuashvili is the fourth youngest ever Olympic Champions after Ilias Iliadis (GRE), Elnur Mammadli (AZE) and Antal Kovacs (HUN) who were even younger than the 20 years and 180 days of the Georgian.

In the women’s category also success for Europe, although the final was won by An Kum-Ae of DPR Korea. She lost the final in 2008 in the category U52kg, Her opponent though, Yanet Bermoy from Cuba also lost last edition’s Olympic final, in 2008 she lost U48 against Alina Dumitru (ROU).

An is the second ever legendary judoka for DPR Korea. In 1996 Sun Hui Kye defeated Ryoko Tani in Atlanta.
Rosalba Forciniti of Italy and Priscilla Gneto of France were Europe’s best fighters today. Forciniti was extremely happy with her victory for bronze. She defeated Romy Tarangul (GER) in a equal fight but didn’t gave anything away. Then she overcame Kim Kyuong-Ok (KOR) and lost against the later Olympic Champion An.

For bronze she defeated Marie Muller of Luxembourg who almost gave herself a beautiful birthday present (27), but stranded against the Italian. She can however be proud on her performance and set small nation Luxembourg more on the judo map with Luxembourg’s best ever performance at the Olympics. In 2008 she finished ninth.

For Italy Forciniti continued a great legacy. Italy won an Olympic medal since the introduction of Olympic judo in 1988, then as demonstration sport it was Alessandra Giungi, the current national Italian coach to win bronze. Also since the official introduction of judo in 1992 Italy continued the success including today’s great and unexpected bronze medal.
Forciniti: “Every time I fought today I just had to keep believing in myself and today, finally, at the end, I won. And my coach even said at the end ‘is it really true?’ and I had to tell him it was really true.”

A second European bronze medal was for Priscilla Gneto from France. The 20-year old fighter defeated Ilse Heylen of Belgium who was also very close to a sensational medal. She could have been the oldest Olympic medallist ever, now Gneto became the youngest ever female judoka for France to take a medal.
Gneto was able to defeat Chinese He in her first bout in the morning and was victorious over Joana Ramos (POR) in her second fight. She lost however in the quarter final against An.
Gneto: “When I lost that match, I cried. I got it out of my system. I was re-motivated by my coach and I promised myself I would continue because any medal is good.”
“I don’t know how I feel yet. I’m only 20, it’s my first Olympic Games – of course, most of the other judoka are more experienced but I’m not afraid of anything. All the other opponents have weaknesses.”

but came back against another Asian Kim Kyung-Ok in the repechage. Gneto was better than Heylen and destroyed her at last with her secret weapon she rarely uses, her special osotogari.

Read more about the premilinaries here:

Read all reactions later on in our community:
http://community.eju.net/judofriends/judo_blogs