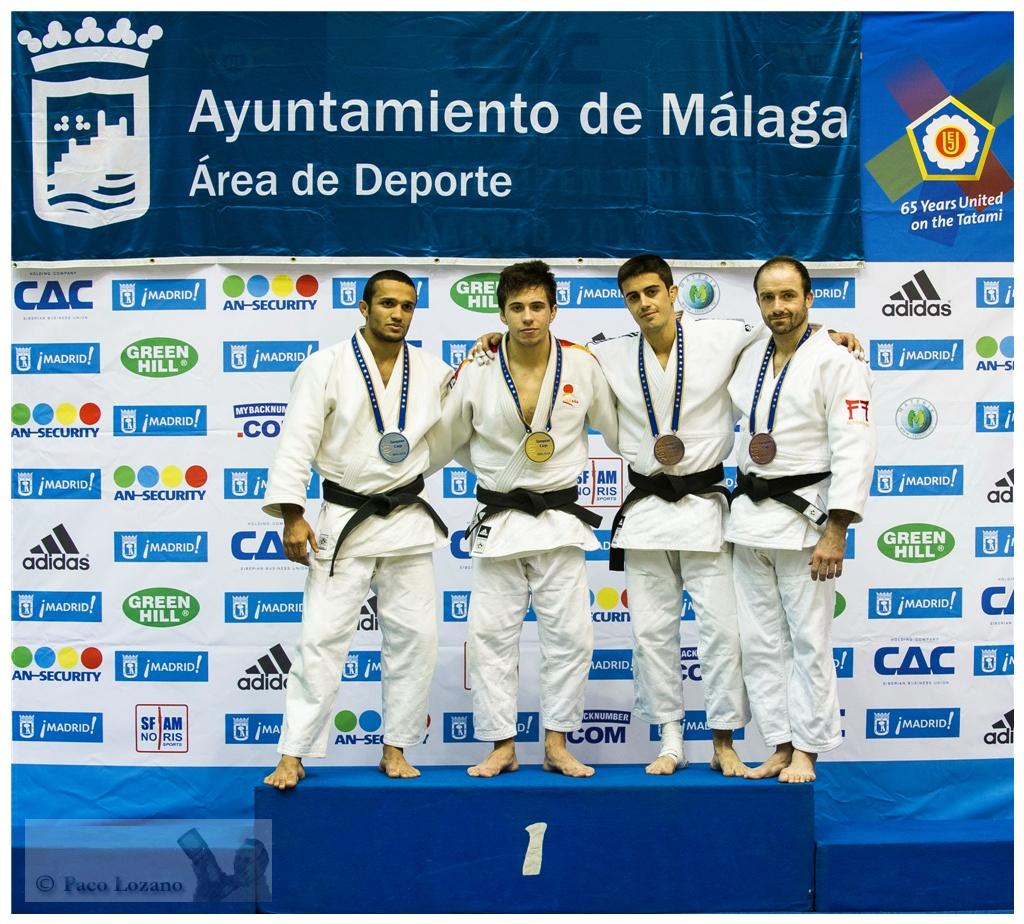 Spain captured most of the medals of the European Cup for Seniors this weekend in Malaga.

The Spaniards were good for 4 gold medals, same amount as the Russian colleagues with 18 medals in total they topped the tally. On Saturday the gold medal for 18-year young Fran Garrigos was remarkable. Garrigos defeated five opponent in a reasonable quality field. Among his victories were names such as Bernard Azinovic (CRO) and good old John Buchanan, who could be his father. The youngster defeated the 2001 World Championships medallist, who’s now aged 37, in the semi final. It was a match with one of the biggest ever age differences in an international event, of 19 years. In the final Garrigos overcame Makhir Gasanov of Russia in the final. On Sunday Adrian Nacimiento took the gold U81kg. In the final Nacimiento defeated British Owen Livesey. Both Portuguese Diogo Lima and double European Champion Joao Pina won a bronze medal. In the women’s category U48 it was Spanish Aiora Arrillaga who took the victory for the host nation attending at a full Spanish podium despite good foreign participation. Super heavyweight Sara Conjero won the gold medal as well. Russia won four gold medals: Men’s U66kg by Akop Akopyn who defeated Spanish Carlos Cases. The category U73kg was fully Russian, all four medals with winner Nikita Khomentovsky who reached the highest place on the stage. Ruslan Kiselev won gold U100kg against his compatriot Azamat Sitimov. Sergey Kesaev won the gold in the category +100kg in the final against 30-year old Angel Parra (ESP). For Great Britain Gary (not HARY) Hall took the U90kg gold medal (swopped order) in the final against Portuguese Hugo Silva. The victorious streak of Euan Burton (GBR) U100kg was ended by Ruslan Kiselev but Burton took bronze after two previous victories in Belgrade and Glasgow. British Nekoda Davis won the gold U57kg against Filipa Almeida (POR). Davis won her four fights, the last two against Portuguese and won her second European Cup this year. Sally Conway won (Not Was) gold for her nation at U70kg when she defeated both Maria Bernabeu as well as Maria Paredes of Spain, in the semi-final and final. For Germany also two gold medals; Viola Waechter made her comeback with gold U63kg, for the first time in this category. Previously she fought for 8 years U57kg. Janina Beune was her rival in the final, so two medals for Germany. Another gold for Germany, also someone who doesn’t appear so often these days. Kerstin Thiele, the Olympic silver medallist won gold this time. Her third victory this year, in comparable modest events., obviously in the category U78kg. In the final she defeated Dutch judo gipsy Linda Boers. On Saturday Slovenia won a gold medal by Petra Nareks U52kg, who was by far the oldest winner in Malaga, aged 31 differing 13 years with the youngest Fran Garrigos. With the European Cup in Malaga and OTC last week the combination of OTCs and European Cups was ended for this year. The next OTC traditionally be held in Mittersill (AUT) beginning of 2014. Most successful nations in the ten European Cups this year were: Russia 31, Germany 19, Slovenia 14, France 12, Great Britain 11. Alena Prokopenko (RUS), Maria Ertl (GER) and Tina Trstenjak (SLO) won three European Cups this year, more than anyone.