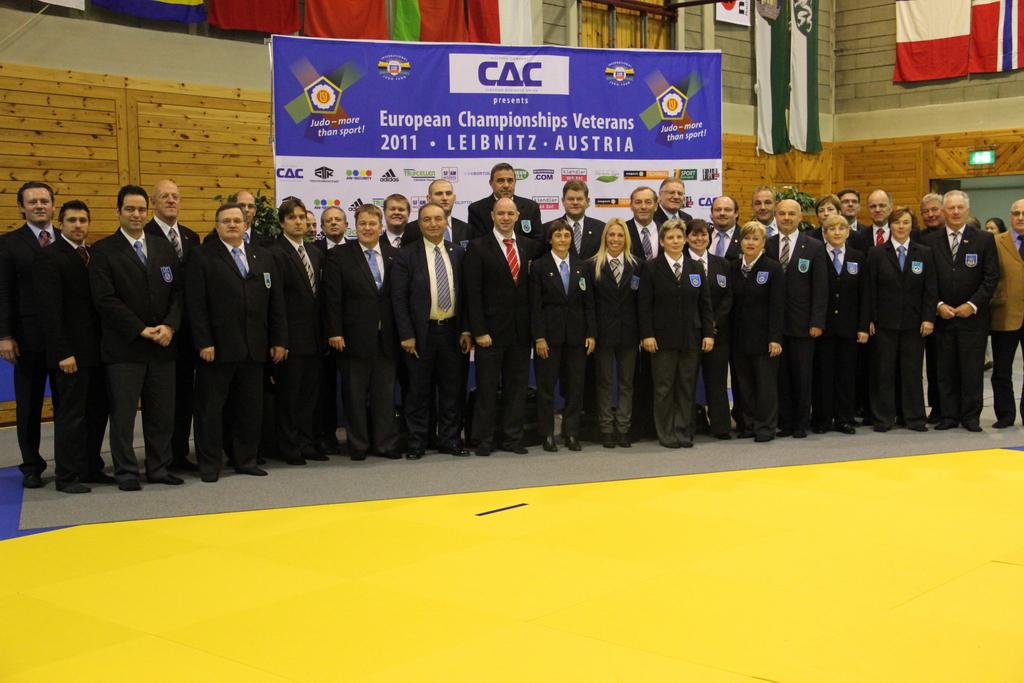 At the last day of the European veteran Championships the team event was programmed. In the men´s category 17 teams in three age categories inscribed and three women´s teams.
Host nation Austria won the silver medal in the women´s division after their final against Russia. In the men´s category 30-39 years Russia defeated France in the final by 5-0. The bronze medals were also for two Russian teams: Russia 2 and Russia Judo 2000. The Russian delegation was huge and they have their own Veterans Judo federation.
In the category 40-49 years Russia 1 was victorious over Germany, while Norway and Russia 2 won both a bronze medal. Also in the age of 50+ the title was for Russia. Russia 2 and France won medals too.

The team event ended the European Veteran Championship with 606 judoka of 31 countries striving to win 69 gold medals. Hundred people were busy with the organization and the Austrian Judo Federation was really happy to host such a successful championships. Hans-Paul Kutschera was also proud to host at the same time the Directing Committee meeting of the European Judo Union so that the board of the EJU was able the visit the finals of this event.

From the side of the EJU Sports Director Johnny Kullenberg (SWE) was very satisfied with the good organization, the good atmosphere and the participation of so many countries. He thanked not only the organisation as everything was well prepared and went smoothly during the event.

Leibnitz, a city of 7,700 inhabitants and almost 5,000 children, was again able to host such championship. Each year Leibnitz is already organizing the European Cup for Juniors. The local Judo Club Leibnitz is a very active club with 160 active judoka and enjoying the new dojo that was initiated by Norbert Wiesner who combined privat money in the new dojo supported by the local government. The major of Leibnitz thanked the EJU to award this championships to such a small town that did everything to manage the growth of the event. For this an old tree had to be removed, and the EJU was so kind to give back a little tree that will grow as fast as the new dojo of Judo Club Leibnitz. Situated nearby Graz and close by the University of Graz, Leibnitz is an ideal place to combine study and judo.

Review all photos of the championships in our media gallery.