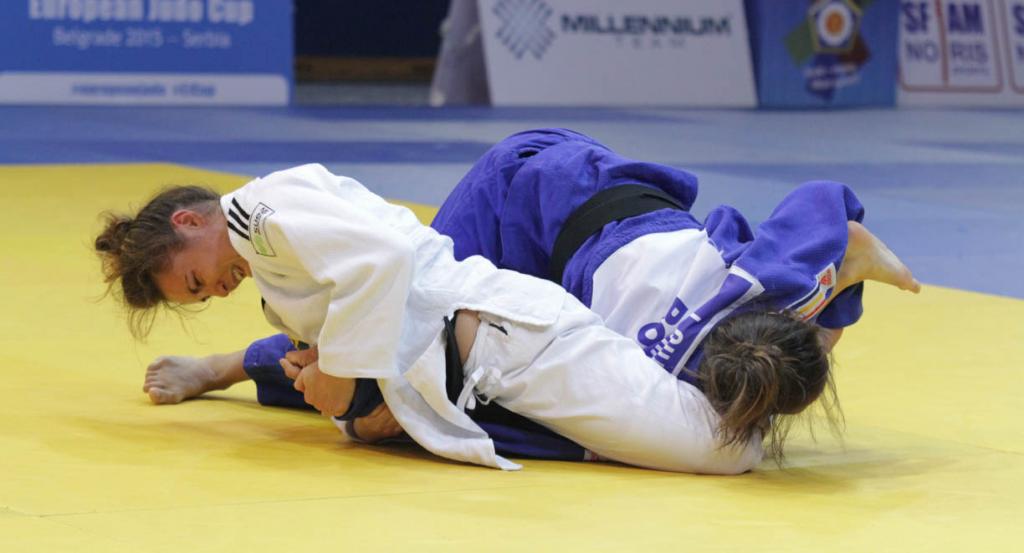 At the opening ceremony Serbian Judo Federation president Ivan Todorov welcomed the Minister of youth and Sports and all guests. The tournament was opened by EJU Sports Director Pavel Yasenovsky addressing the perfect organisation where also the athletes enjoyed a good atmosphere, good light and smooth competition.

In the category for women U48kg the title was for France, although that wasn’t a surprise with two French girls qualifying among the 12 participants. Melanie Clement defeated Melodie Vaugarny in the lightweight final. For Clement it was her first European Cup victory this year, last year she won in London and Celje. Vaugarny medalled at the European Open in Minsk and won in Arlon in February. She defeated Julijana Savic in her opening match and Ioana Matei in the semi. In the final both athlete were equal but Vaugarny was one penalty behind, but had the best moves in the second half of the match but those weren’t awarded despite the calls of coach Celine Lebrun and it was Clement who won the title. Romanian Ioana Matei won bronze, just like last year. Tatiana Osoianu took bronze for Moldova.

In the men’s division 185 men contributed with 66% to the 277 participants in Belgrade. The men U60kg saw Cedric Revol of France taking the title against Yanislav Gerchev. The Bulgarian judoka couldn’t prolonged his success earlier in July in Sindelfingen. He had won silver in Belgrade in 2011 but wanted the gold this time. In fact 21-year old Revol was in the same situation, he lost the final of Tampere last year and was now able to overcome the 2011 European U23 Champion. In a good ground-fight, halfway the match, Cedric Revol controlled Gerchev but he escaped remarkably with just a yuko of damage. But in the last minute Revol was able to add another yuko which gave him more air for a tactical remainder of the fight and collected his first gold medal. Bulgaria also won bronze by Borislav Yanakov. Elnur Badirkhanov won bronze for Russia.

Croatia celebrated the comeback of Andrea Bekic after an injury. At her comeback she qualified for the final against the number one seed and compatriot Tena Sikic. Bekic had won four European Cups before, but Sikic is the one in shape as title defender in Belgrade and this year’s win in Celje. It was Bekic who led by penalties after two minutes when she launched a bad uchimata, but could transfer the throw into an oseikomi and won this Croatian internal affair. After bronze in Belgrade in 2011 U57kg and silver in 2013 Bekic scores again in an odd year, now with gold and her fifth European Cup victory.

Nieke Nordmeyer of Germany led quickly in her bronze bout and threw French Aurelia Issoumaila for waza-ari twice in a tough battle. Serbian Marica Perisic defeated Masa Smiljkovic by ippon, but it was a guaranteed home medal anyway.

The category for men U66kg was exciting with a chance for home gold for Marko Vukicevic. The title defender qualified again for the final via victories over Robin Corrado (FRA), Hristian Hristozov (BUL) and Serbian Ilija Ciganovic in the semi final. In Saturday’s final he met with Rok Plesnik of Slovenia who is a collector of national U23 titles, typical for this European cup level. Vukicevic who won bronze at last year’s European U23 Championships had a good grip on Plesnik and scored after 100 seconds. One minute for the end Vukicevic struck with a choke and prolonged his title in Belgrade. Plesnik improved last year’s bronze into silver, but lost his last match.

Franck Vernez won bronze as his compatriot Robin Corrado was injured. Ilija Ciganovic won bronze against another French fighter Romain Poussin via a waza-ari difference. In the last minute Poussin did his utmost to defeat the Serbian via an armlock but Ciganovic escaped and took bronze for Serbia.

At world level Romania offers vice world champion Caprioriu, France has Automne Pavia. At European Cup level Romania had Loredana Ohai in the final, the winner of last year and 2012, she could go for the final. But the French had Lola Benarroche, not so successful at this level, but in 2008 she won European Junior silver and in 2013 she won European U23 silver. Today she didn’t go for the silver, just the gold was good enough for 24-year old Benarroche.

Both athletes are of the same generation and met before in the final of the 2013 European Championships U23 where Ohai took the title…against Benarroche. But this final was different. Benarroche led by one penalty with just 90 seconds to go but got penalized as well. Not much later she took advance of a slip by Ohai and scored waza-ari and finished the match by superb groundwork and Ohai submitted for the armlock. Today benarroche defeated Daniella Balogh (HUN), had a bye against last year’s bronze medallist Desiree Klinger who cancelled in the last moment due to a knee injury and the French also defeated Esmeralda Puts in the semi final as warm-up to the revenge match against Ohai. Emöke Knetig of Hungary and Morgane Arthuis of France took the bronze medal.

Dutchman Joery Biekman was today the most determined to show his business card to his rivals U73kg. This tournament was his qualification tournament for the European U23 Championships and in the final he was dominant over Luka Harpf of Slovenia. The 22-year old Dutchman tried to catch Harpf via a choke but lost the grip on the match bit by bit and the two bits were two penalties. But 28 seconds for the end his plan worked out while his coach advised him to stand to safe time, but Biekmann felt this one succeeded and took persisted for gold. The Dutchman defeated five opponents and captured gold via Sean Martell (GBR), Julian Kolein (GER), Nebojsa Gardasevic (MNE) and Frigyes Szabo (HUN).

Youngster Lara Reimann of Germany took her first senior international victory in the category U63kg. The European Cadet Champion of 2014 was in Belgrade to prepare for the Junior World Championships in Abu Dhabi and successfully added another milestone to her impressive list of honours. In the final Reimann overcame Alessia Regis. The 26-year old Italian couldn’t stop the talent of Cologne but was despite her loss not unsatisfied with her silver in Belgrade. Since this year she is fighting U63 after a step up from U57kg. This year she took silver as well in Uster and bronze in Celje, it was her sixth European Cup medal. For Reimann remains the junior road to success, which is just a stepping stone towards to 2020 Olympic Games. Brown belt Reimann defeated Lizzy Gevers (NED) and Ivana Sunjevic on the road to the final and needed just 46 seconds to defeat Regis.

Dutch Iris Iwema was happy to back with a bronze medal after two injuries. The same counts for Croatian Maja Blagojevic who injured her ligament and made her comeback as well with bronze. She came back in the bronze bout too against German Sheena Zander and captured the medal by ippon.

France leads the medal table after one day of fighting with three gold medals, Croatia had a U52kg final with two medals and added bronze U63kg and host nation Serbia can be satisfied with gold and two bronze for Marko Vukicevic, Ilija Ciganovic and Marica Perisic. Germany follows with two bronze at the title for the youngest winner of the day: Lara Reimann. The Netherlands enjoyed the gold of Biekmann.