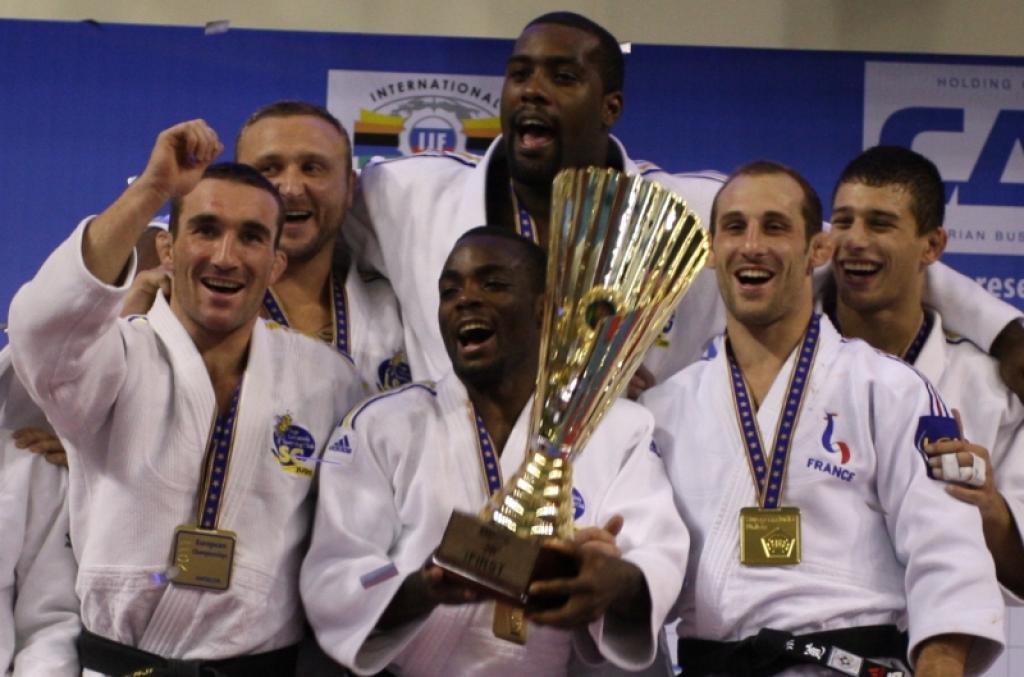 The men of Levallois have secured the double. The team of Christian Chaumont won both the men’s as the women’s division of the European Club Championships in Antalya.
In the final the French opponents of Chilly-Mazarin were defeated by 4-1. It was however Chilly-Mazarin that took the lead because of a hansokumake by Dimitri Dragin against Maxime Le Goanvic. Benjamin Darbelet defeated Nils Deret U73kg.
Alain Schmitt fought a tough match against Anthony Fritsch U81kg but scored 2-1
Also Alexandre Iddir had a tough opponent in Lloyd Soetens. But two minutes before the end Iddir launched Soetens on the ground and won the title for his club.
Teddy Riner finished Cedric Medeuf in one minute for a fast celebration.

In the semi final Chilly-Mazarin defeated St. Genevieve by 3-2 with a smashing start of Maxime Le Goanvic who destroyed David Larose by an ippon. Larose was unconscious and had no idea where he was. Later he reviewed the moment and wasn’t aware what happened, but did conclude that the start of the lift should have been matte as he strangled his own arms around Larose.
Nonetheless performed great against St Genevieve and won the first three matches and qualified for the final.
Yawara Newa defeated St. Genevieve in the bronze medal match by 5-0. Last year’s winner that won seven titles in the last decade now lost against Levallois in the second round by 3-2. A smashing poule with Levallois, Abensberg and Yawara Newa to meet before the final. The reputation of the teams apparently does not count at the draw. Only the medallists of last year were seeded when the name changed from European Club Cup to European Club Championships.
Despite the heavy line-up with Mogushkov, Isaev and Nifontov, Levallois was able to make the difference in the first three weights leading by 2-1 against the Russians. Yawara Newa came back in the repechage against Izmir Spor by 5-0.
The second bronze was captured by the strong team of TSV Abensberg. In the semi final the Germans lost to a better Levallois but in their last match against Kocaeli Spor the German team hit back by 5-0. According to the new rules always three players of the home country should be in the line-up. In the past Abensberg could take their usual members to the European Club Championships final, as they are used to in the Bundesliga. The new rules however limited that to two judoka of the total of five. So it’s either a choice for Zantaraia, Uematsu or Iliadis in the starting line-up.
In the final match it was Zantaraia to start with a victory. Maresch, Iliadis and Toelzer secured the victory by 4-1. Hasan Vanlioglu took the victory against Christian Voelk to save the honour for Kocaeli Spor.

Watch all results and photos here: