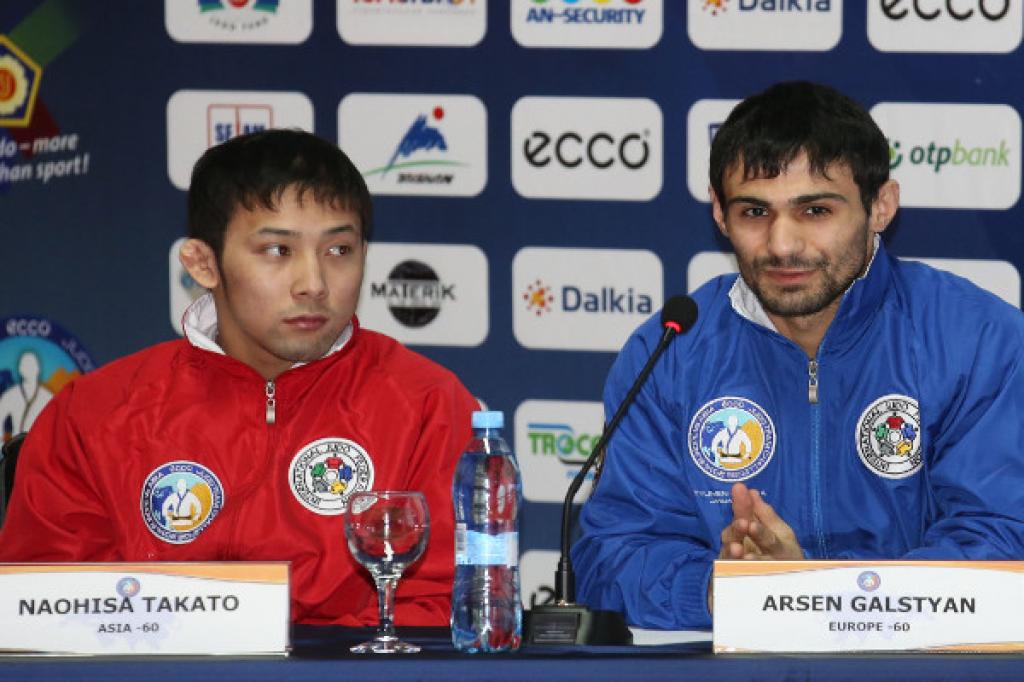 The leading judoka from Europe and Asia are set to represent their continent at the ECCO Team Challenge, Tyumen 2014 on Saturday.

Europe and Asia, two of the powerhouse forces in judo, will go head-to-head in the unique Team Challenge amid the Siberian winter which snap has taken a foothold in Tyumen with the temperature dropping to -30 degrees on Friday. Tyumen, which hosted the World Judo Masters 2013, has established itself as not only the epicentre of Russia’s renowned events but now has a permanent place on the World Judo Tour as the country’s annual Grand Slam moves from Moscow to Tyumen this year 12-13 July. Saturday’s one-day team competition is the brainchild of the European Judo Union in conjunction with the International Judo Federation and is being hosted by the Government of Tyumen region, where each team will consist of 14 judoka (seven men and seven women). The competition consists of one round of 14 matches as contests will alternate from women and men in order of weight categories from the lightest to heaviest. The European team will be managed by Russian Judo Federation General Team Manager Mr. Ezio GAMBA while their opponents Asia will be led by Director of the Judo Union of Asia Mr. Armen BAGDASAROV. On the eve of the competition both continents presented their teams at the Tyumen Technopark in front of the media and distinguished guests. Mr. Sergey KUSHKOV, President of the Tyumen Judo Region, said: “I am very pleased to see all my judo friends and welcome the judo family to Tyumen. Judo is growing here all the time due to the events we have hosted and the new Tyumen Olympic Judo Centre. We are proud to host this tournament and think it will be a great show. I wish everyone good luck and I hope you all enjoy it.” Mr. Sergey SOLOVEYCHIK, EJU President and IJF Vice President Sergey Soloveychik, said: “On behalf of the IJF and EJU, I welcome everyone to Tyumen for the ECCO Team Challenge. Tyumen has been and continues to be an important place for the judo community to meet up for important competitions. I am grateful to the Tyumen Judo Region and the Governor for the support. We’re very pleased to have the best athletes in the world here including world and Olympic medallists.” Mr. Vlad MARINESCU, IJF TV and Marketing Advisor, said: “Dear Presidents, coaches, officials and athletes, it is a big honour for me to be here and be back in the world of the judo family and to see judo continue to flourish. Such an event exposes judo heroes to the public who have embraced it. A SportAccord TV report showed that judo was the most watched sport at the World Combat Games last year in St. Petersburg. The judo stars here to compete this weekend are empowered by their federations and coaches and this event is a great showcase. Mr. Armen BAGDASAROV said: “We have 14 athletes and individually they are all very good. They’re pleased to be taking part in the competition. The most important thing for me is the final result and not individual contests.” Mr. Ezio GAMBA said: “All the time we try to do our best and the aim is to win. I am sure the event will be a good experience for everyone. It is a great honour for the athletes to take part in and it’s interesting that they all know their opponents ahead of the competition.” Olympic champion Arsen GALSTYAN (Europe), who fights world champion TAKATO Naohisa (Asia) for the first time, said: “I thank everyone for supporting the event, I’m looking forward to competing. I know I have a very serious and skilled opponent and it will be an intriguing contest for everyone to watch.” TAKATO said: “I’ve watched many videos of GALSTYAN and it is a hard fight to predict but I’m sure I’ll be ok. I promise to show my best and produce some exciting judo.”