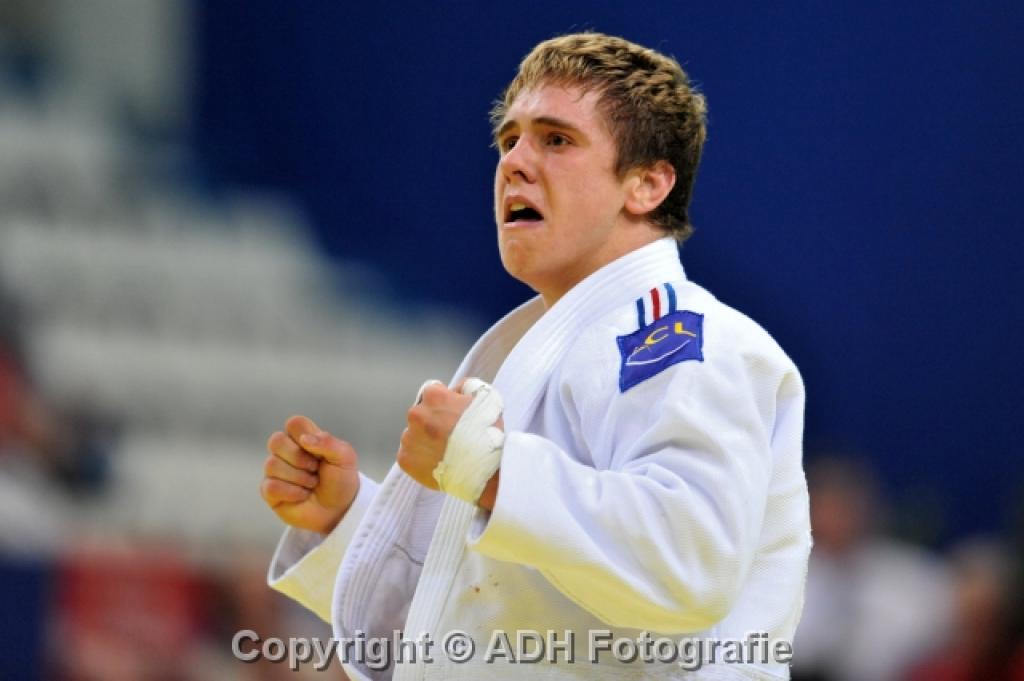 Loic Pietri set up the Stade Coubertin in Paris at the Junior U20 World Championships. His win over Magomed Magomedov (RUS) turned the hall into a fantastic venue for judo. Pietri captured the home crowd with excellent judo which resulted in the world title U81 kilogramme, six weeks after being crowned as the new European Judo Champion.
Pietri defeated all other medallists Magomedov, Hui-Jung Lee (KOR) in the semi final and bronze medallist Tomohiro Kawakami in the quarter final.

In a good athmosphere in Paris the World Junior Championships brought fantastic judo due to the new regulations.
EJU and IJF Referee director Jan Snijders: “It’s amazing how the judoka respond on the new rules. We now have one referee, no assistant refs and we are going to test a few tournaments more. They all have communication with us and we can advise them differently as we see it better due to the coverage. But this doesn’t happen very often as you don’t have the discussion between the two other referees anymore. But most of all it’s not about the referees but it’s great to see how judo now can develop because of this regulation. We’ve seen great judo this tournament, everybody could see that.”

One of the great European judoka these four days was Quedjau Nhabali (UKR) who took the gold medal in the U90 kilogramme category defeating Archil Shinjikashvili (GEO).

In the U52kg category Majlinda Kelmendi was a great sensation. You was without a doubt the best in her category. She already won the European U20 Championships, and this time she was invited to fight under the flag of the IJF as her home country Kosovo is not allowed to participate. A good move by the IJF awarded with a gold medal.
Kelmendi previously fought for Albania, but was offered this opportunity by the IJF. Kelmendi defeated Levy Shahar (ISR) in the final. Turkye won another bronze medal by means of Tuba Zehir. Sahin Abru also won a bronze medal for her country U44kg. In this class Katharine Menz (GER) lost the final to Tomoko Homogita (JPN).

Hedvig Karakas (HUN) was again in super shape U57kg. Again she beat Juul (NED)Franssen although the differences are always small. Karakas is already participating in the seniors for more than a year and she benefits from this broad experience. She won the bronze medal at the Senior World Championships, followed three weeks later by the European U20 title and now won the junior U20 World title. Karakas has an amazing track record. But the Hungarians perform excellent anyway.

Under 70 kilogramme Abigel Joo won the bronze, but the gold medal was for Haruka Tachimoto (JPN) who defeated French home favourite Lucie Perrot. Although Perrot was supported by the tremendous crowned they couldn’t prevent Techimoto to win the world title.

On Sunday the U100kg category was exciting to see. Strong young men, in a very close field finally won by the favourite. Lukas Krpalek (CZE) prolonged his world title of last year in Bangkok and was the best of all. The tall Czech was again a sensation excepted for the final. His Polish opponent Tomasz Domanski even led the final match until the last minute when Krpalek took over and decided his match on the ground.

In the U78kg category Japan won its fourth world title in the womens division. Akari Ogata beat Kayla Harrison (USA) in the final. Luise Malzahn was the only European judoka and amazingly happy with her bronze world medal.

+78kg Spain lost her favourite in Sara Alvarez who got injured to her knee in the semi final and was carried away of the field. She couldn’t fight her bronze medal bout, Yamabe (JPN) won the bronze as well as Sandra Jablonskyte (LTU).
The final was won by Larisa Ceric (BIH) who was able to defeat Iryna Kindzerska (UKR) who had an amazing year winning the European title recently in Armenia and many other tournaments. This time however she lost the final and Ceric could win the first ever world title for Bosnia.

In the men’s heavy weight category Eun-Saem Cho of Korea took the gold defeating Magomed Mazhmudinov (RUS) who had to leave the tatami injured after a massive throw by Cho. Both two bronze medals where European medals for Domenico Di Guida (ITA) and Andre Breitbarth (GER).

Japan won four categories in the men’s division, four in the women’s division and 14 medals in total obviously won the medal tally.