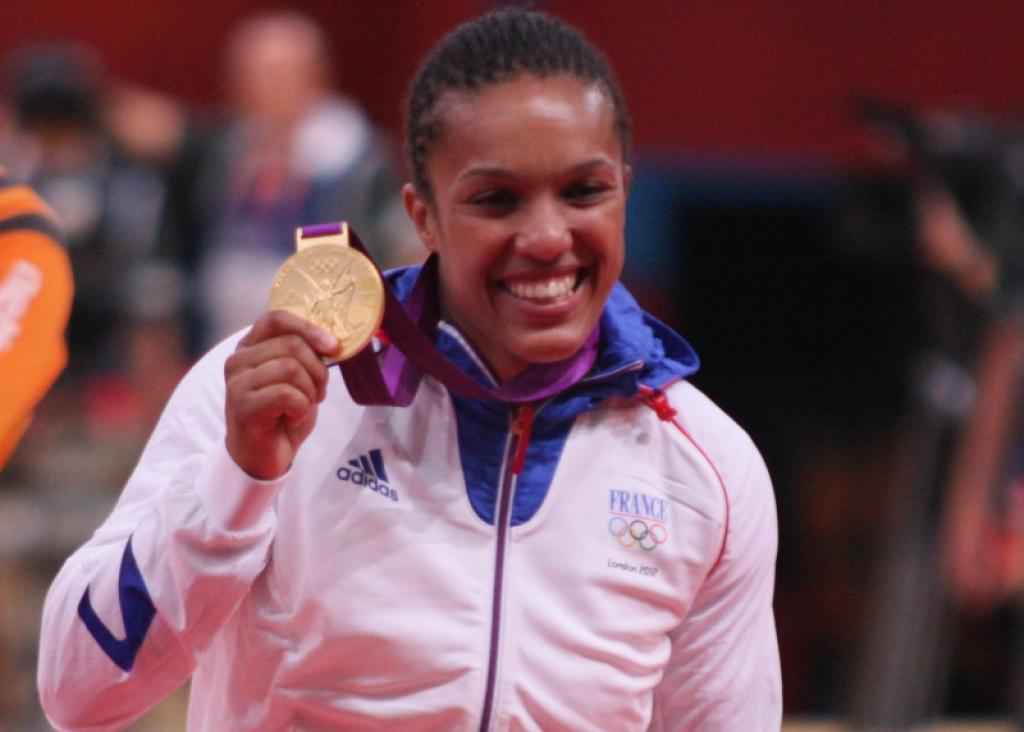 French Lucie Decosse has won the Olympic title at the ExCel on Wednesday. The favourite met the expectations her the fans, the French people and herself. In the final she defeated Kerstin Thiele from Germany who was today’s revelation.
After winning silver in 2008 and becoming World Champion twice in between, this is the most important victory for Decosse in her life.

Decosse made it clear who should claim the title, the French scored a waza-ari in the first minute and gave Thiele a power treatment. After 3.23 she was one second away from her second waza-ari and the Olympic title controlling the German by a hold but Thiele escaped and kept the hope alive.
With her strong right grip she didn’t gave Thiele any moment to get into the match and built out the lead with another yuko with 1.44 to go.
The pressure on the two fighters was overwhelming. The expectations for Decosse, the power of Decosse on Thiele. She was determined to defeat Thiele for the fifth time in her career in five matches.

It was not a surprise Decosse could fight out easily supported by the numerous French she claimed her title in London and crashed after the bell from joy. She did it after losing the final in 2008 and celebrated the title with any fans.
Satisfaction also for the German fans and teammates who already celebrated the silver after her win against Chen in the semi final. Never whipe out German fighters, but this time the difference in skills was too big despite anything could have happened today, more fairytales have been written in London.

For the bronze Edith Bosch came back in the repechage after a victory against the disappointing Haruka Tachimoto (JPN) and fought against Ye-Sul Hwang (KOR) who again proved to be a tough opponent and even took the lead 23 second before the end. What was happening in London, also Bosch wondered. With 12 seconds left Bosch showed that the medal was her medal. Not many people believed she could back, but Bosch knew she could and crushed Hwang for yuko to the ground, an amazing comeback, well appreciated by the great fans. Some fans never never seen judo before and a comeback like this was worth wile clapping for 12 seconds. Since that score it was clear that Bosch would never give away the medal chance. With a kinza, confidence, power and conditional so much stronger the referees were anonymous in their decision. Bosch claimed her medal, her third Olympic medal giving her a position as one of the best ever judoka for The Netherlands. Mixed feelings but each medal has its emotional value after 4 years of preparation, even bronze.

The second bronze medal was a victory for Yuri Alvear. The 2009 World
Champion proved that this was not a single result. Alvear won the first ever judo Olympic medal for her country.

Decosse vs Thiele was the second European final this week after Lasha Shavdatuashvili defeated Miklos Ungvari U66kg on Sunday. It was only the fourth European final for women since 1992. In 2008 Giulia Quintavalle and Deborah Gravenstijn fought the final U57kg, in 1992 judo was introduced officially for women at the Olympic Games. In Barcelona Miriam Blasco and Nicola Fairbrother fought U56kg and Catherine Fleury and Yael Arad fought U61kg.

In the men’s category Korea has won its second gold medal, an unbelievable success ranking Korea higher than Japan. Song Dae-Nam defeated Asley Gonzalez of Cuba by ippon after more than two minutes in the Olympic final. What a surprise in this category. Song had won a Grand Slam in 2009 but never gave the impression that he was the new Olympic Champion, until today when everything was possible. A victory Juan Romero (URU), Elkhan Mammadov (AZE), Masashi Nishiyama (JPN) and Tiago Camilo (BRA) in the semi final. Asley Gonzalez took silver with good judo. He won bronze at the World Championships but also peaked at the right time, now for the second time in his life, but let himself catch by Song in the final with a great combination.

Gonzalez is the first male finalist for his country since Cuba lost three finals at the 1980 Olympic Games in Moscow. Since then only bronze medals, the last for Oscar Brayson in 2008.
Song is the 11th Olympic Champion for his country after Kim Jae-Bum won the title on Tuesday U81kg.

The bronze was in the end for World Champion Ilias Iliadis from Greece who won this third medal and now has all colours. However most people expected him at the highest stage, but Kirill Denisov threw sand in the Greek motor in today’s quarter final. But Iliadis came back in the repechage and gave no chance to the good fighting Australian Mark Anthony. Iliadis was too good for him. In the fight for bronze Iliadis defeated Tiago Camilo, two fighters but only one medal available. The Greek was the best but lacked to win against Denisov who he usually masters. Still Iliadis was happy with bronze and showed his proud on the Greek flag with all respect for the cheering public.

The second bronze fight was won by Masashi Nishiyama of Japan against Kiril Denisov, who once again surprised. He kept cool in a thrilling match against Denisov. The Russian has given his best against Iliadis but was defeated by Asley Gonzalez by a great score in the semi final and remained with empty hands. Ideally he would have been the fourth medallist in the successful team of Vitaly Makarov, but this time Asia won the battle between the continents.

Read the reactions of all medallists here:
http://community.eju.net/judofriends/blog/24