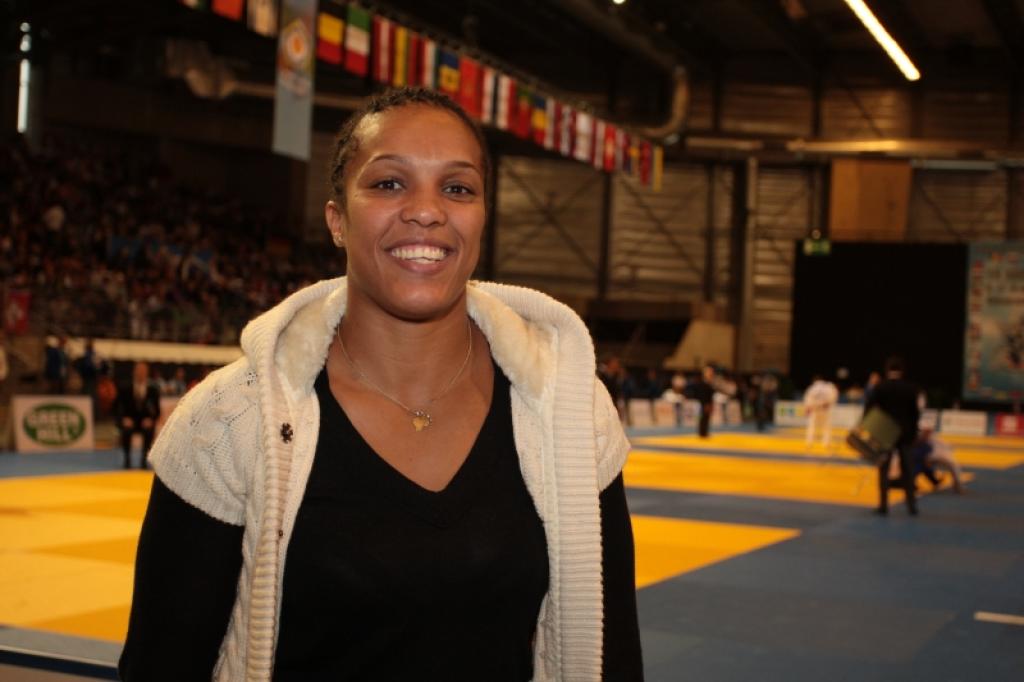 If you see her results you won’t find a European Junior title, but you going to find 4 individual World titles and an Olympic silver medal and four European titles; Lucie Decosse.

The triple World Champion is one of the fans in the tribune to support her team mate Linsay TSANG SAM MOI. Both judoka are from the same club Lagardère Paris Racing. A successful club where also European Champion Penelope Bonna is from, Morgane Ribout the 2009 World Champion and originally also Teddy Riner.

The success of Decosse who started her golden hunger for the gold in Nabul (TUN) winning the World Junior title in 2000, is amazing. In 2007 when she finished 7th at the World Championships, she thought she needed to work harder to reach the level of one of her great examples Severine Vandenhende. The Olympic Champion of 2000 in the category of Lucie was giving the example how to perform if you want to reach this level. This is that she wanted and 6 weeks later she won the Junior World title in Tunisia.

Decosse: “it’s good to loose. I lost at my first European Junior Championships in 1999 against Ana Repida (MDA) but this inspired me to work harder. But in 2003 I finished seventh in Osaka at the World Championships and I thought I should really be more concentrated. Not only work hard but also have the right focus. I was already European Champion in 2002, but that’s not the guarantee for success. It’s working hard, I believe I train harder than the rest, and pure concentration.”

People may have seen the concentration of Decosse in advance of the World Championships final, for some people over the top and purely to provoke. Decosse: “No I am really relaxed but not during the fight, but I do need to pump up the concentration and the tiger in me. It’s necessary to beat good judoka such as Bosch and Meszaros. You know they want to beat you. Staying World Champion is much more complex than becoming one. So it wasn’t meant to be provocative but purely my way of warming up for the match.”

Decosse refers to her background. Born and raised in Paris but with a mother from French Guiana, a small department of France counting just 217,000 inhabitants boarding to the north of Brazil next to Suriname. Decosse lived in Guiana when she was 14, until her 17th.
“It was a great time in a very relaxed environment. I started judo in Paris at school when I was 6, and everything went well until my parents went to Guiana. There I trained in the club where also Linsay Tsang Sam Moi started years later, so I know her a long time since she was a child. But when I got back to Paris I trained at Lagardère again but fighting was much more competitive as in Guiana as you can understand. So it took me only 3 years to win the World Junior title since my comeback in Paris. That’s quite a miracle. Because of my Guiana style of attitude I really need to give myself an extra kick to win my fights.”

For the organisation it’s great to have a champion such as Lucie Decosse watching the European Championships. Every year she will go back to Guiana and enjoy a little vacation, where time allows her. There she is back with her friends and the people are very friendly to her and want to offer her anything. In judo she is a star, but in Paris she is not living the life of Teddy Riner. “I am glad I am not! I rather want to live normal, my life is good at the moment. Of course if you are a star like Teddy things can be made more easily to earn your salary but I’m glad I can have a normal life.”

Next goal for Decosse is the Olympic title that she missed in 2008 when she lost to a former enemy Ayumi Tanimoto (JPN). Decosse: “I defeated her at my first world title final in 2000 but she got me back in 2008. Tanimoto was one of my nemesis in judo, I fought her many times. Now my rivals for the Olympic title are Edith Bosch (NED), Anett Meszaros (HUN) and Yuri Alvear (COL). They are all left, I’m left too so that conflicts. But I think I have a strong hold of the sleeve to put them under pressure.”

“After the Olympics I will not yet retire, maybe wait for the Sao Paolo World Championships in 2013 but then it’s been a good life as an athlete. It’s nice to see this level at the European Judo Championships, I can motivate my clubmates what to do to reach the level.”

Watch all pictures of the European Junior Championships here:

The full career of Lucie Decosse can be found here:
http://www.judoinside.com/judoka/view/351/lucie_decosse/