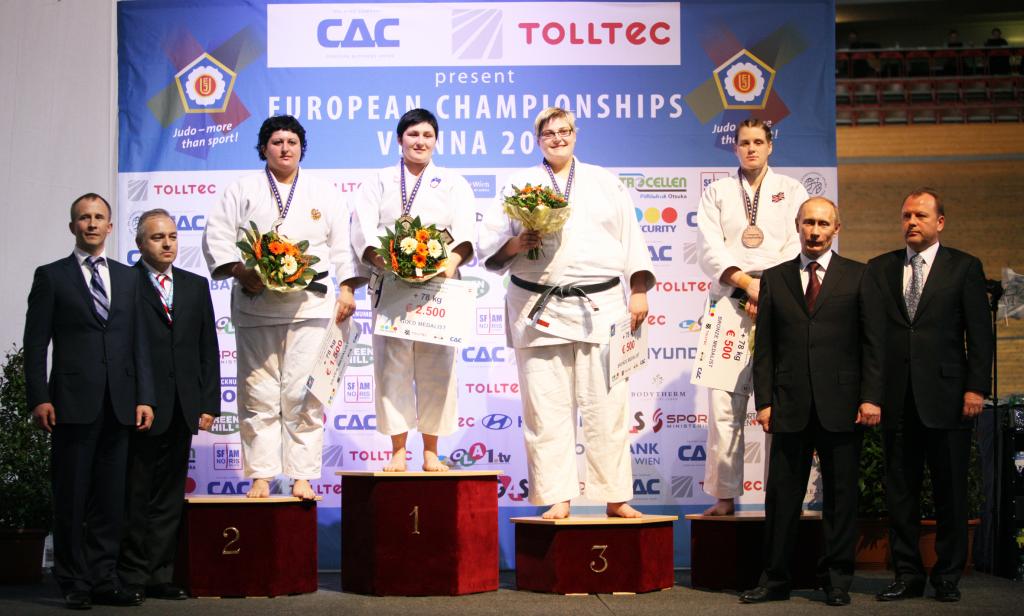 In the women’s heavyweight category +78kg Lucija Polavder won the European title in the final against Tea Donguzashvili who lost her seventh European final. Donguzashvili however won the European title in 2006, but was confronted with a superb ippon by the Slovenian. Polavder received the gold medal from Prime Minister Vladimir Putin who was present today and held a fantastic speech for judo.

In the semi final Polavder faced an old rival in Karina Bryant. Bryant secured her last European medal by beating the Slovenian in the 2005 +78kg final. This time, the Slovenian dominated the fight and it ended with a disqualification for Bryant having received three penalties. Polavder went on to win gold. The four-time European Champion had a strong start on day three of the Championships and took the bronze afterall. Bryant’s next fight against Gulsah Kocaturk of Turkey was her final chance to take a seventh European medal. The bronze medal contest started slow with Bryant receiving a penalty for not attacking. Both players then received a penalty a piece, leaving Karina one penalty point away from a second disqualification. But the Brit acted quickly, following up on the ground with a strangle hold, which secured a submission from Kocaturk for the bronze medal.

Urszula Sadkowska (POL) won the second bronze medal by an ippon victory after two minutes against Lucia Tangorre of Italy. The most experienced judoka in the women’s division, British Karina Bryant won the bronze medal in this category defeating Gulsah Kocaturk (TUR) after a close fight with penalties for both fighters, but in the end it was Bryant who scored the ippon. Bryant won four European titles in her career, and lost five world championship finals. The victory in this mini final was Bryant’s seventh European medal starting in 1998 with gold.