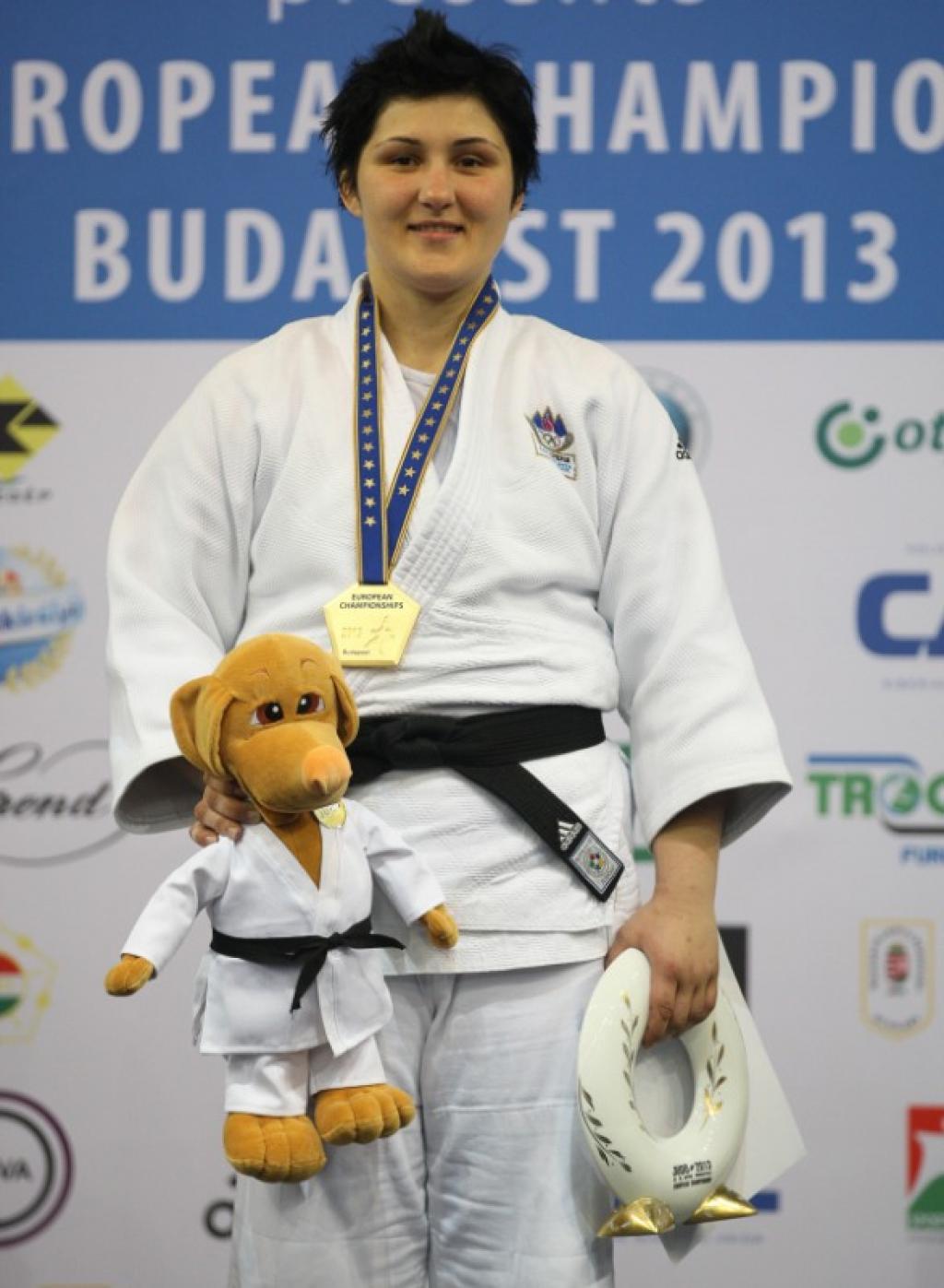 Slovenia has an amazing Championships. Also in the heavyweight category they took the gold medal. Lucija Polavder regained the European title that she won also in 2010. Last year she lost the final against Ivaschenko, this year Emilie Andeol was her opponent. The French was the highest seeded judoka. Polavder won the match because of four consecutive penalties for the French. Andeol was in a good shape though after winning the European Open in Prague this year and two victories today against Dutch Uilenhoed and Kindzerska (UKR). Polavder defeated Jasmin Kuelbs in her first match and Belkis Zehra Kaya in the semi final.

It was the second Slovenian gold medal this season after Rok Draksic claimed the title in the men’s U73kg category and Ana Velensek was close to gold U78kg but came a few seconds short.

The bronze medals in the heavyweight category was a guaranteed Turkish success. Both strong women fought eachother. It was Belkis Zehra Kaya to win this bout by ippon. Iryna Kindzerska was really happy to win her first European medal. The 21-year old Ukraine judoka took the first medal of her nation at this championship. In her bronze final she overcame Jasmin Kuelbs of Germany. Kindzerska lost her semi final to Emilie Andeol.

All reactions of the medallists:

Lucija Polavder (SLO), gold: I am very happy to have won this title for the second time. It is my eighth medal at the European Championships. I had a great day and I took what I wished. I didn’t quite know what to expect because of the new rules, but it turned out good for me. After the Olympic Games I took a break from judo.

On beating Emilie Andeol in the final: My coach gave me good advice so I was able to win against the heavier French girl.

Emilie Andeol (FRA), silver: I am delighted that I got the silver medal, but I am frustrated that I didn’t give everything for victory. My opponent Polavder is very experienced and an Olympic medalist and former European Champion. I was the underdog in the final. My next goals are the Masters and the World Championships and the next European Championships in Montpellier, if I qualify.

Belkis Zehra Kaya (TUR), bronze: First of all I want to thank my coaches and our team. I am very pleased with my medal. My hardest match was the semifinal today against Lucija Polavder. My next goal are the Mediterranean Games in Turkey. I want to get the gold at home.

Iryna Kindzerska (UKR), bronze: This is super, just incredible. I wanted it for so long and I have trained a lot for it. It is my first senior medal at Europeans and I competed for the second time at Europeans. After I finished fifth at the Olympic Games I had kind of mental block and finally I overcame it. I was fighting for the top three and I was so nervous. I was praying.

On her learning experience: Never give up, even after a disappointment. You have to pull yourself together for the next fight.

On the hardest match: That was against the French Andeol in the semifinal. I never fought her before and I didn’t quite know what to do.