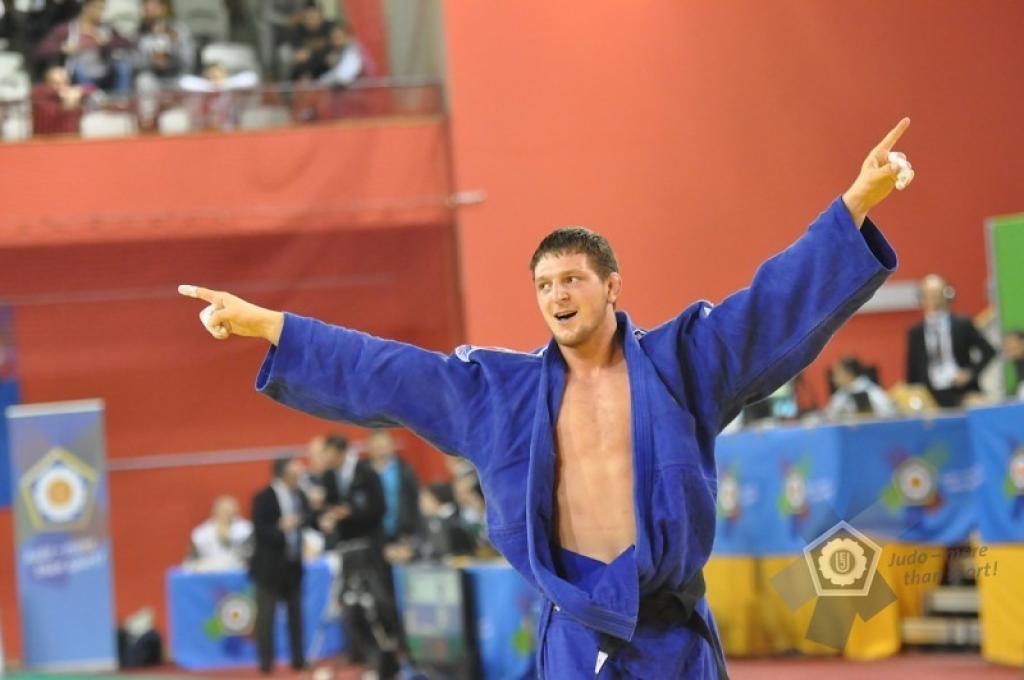 The Czech crowd at the European Open in Prague was happy and cheered for Lukas Krpalek.

The Czech star was able to win the category +100kg, a bit unusual for him, but it gives him some space to be relaxed in his weight management. Krpalek defeated Marius Paskevicius of Lithuania in the heavyweight final. Last edition Krpalek won the category U100kg. Lukas Krpalek has proved again that he is invincible at home. This time he finished all of his opponents before the time limit. He pinned Abdrazakov with tate-shiho-gatame, threw Serbest of Turkey with ashi-guruma for ippon, strangled Bor of Hungary in the quarterfinal, threw Ulziibayar of Mongolia in the semi-final for ippon and in the final countered Paskevicius of Lithuania for ippon. “Krpalek is extremely strong in ne-waza”, Barna Bor of Hungary said after the quarter-final fight. “I knew I should be careful on the ground with him, but he utilized the small mistake I made. He is a well deserved winner”, Bor said. “I am extremely happy to win in Prague again”, Krpalek said. “It is a bit different to fight in +100 compared with -100 kg. The heavy guys are stronger but not that quick. I therefore used me speed today. The fight with Bor was the most difficult one. I am however going to continue in -100 kg”. Krpalek concluded. Hungarian Barna Bor won the European Open in Oberwart two weeks ago, now he had to be satisfied with bronze. Duurenbayar Ulziibayar of Mongolia won bronze as well. Srdjan Mrvaljevic won the category U81kg. In the final he defeated Laszlo Csoknyai of Hungary by one shido. Mrvaljevic performed several nice techniques during day but Csoknyai was too strong for any throw. Csoknyai launched several good attacks in the last seconds but Mrvaljevic withstood them and won the tournament. For Mrvaljevic it was the first ‘World Cup’ victory since 2011. But since then he won silver at the World Championships in 2011 and competed at the Olympic Games and won the Mediterranean Games. The number 38 of the World Ranking List had to win five fight for getting the gold. For Csoknyai the years started well with two medals, but both silver in Sofia and here in Prague. Lukasz Blach won his third World Cup medal in his career. The Polish judo won the bronze U81kg against Marconcini (ITA) but Giovanni Carollo did win bronze for Italy. Murat Gasiev claimed the gold for Russia in the category U90kg. In the final he strangled Aleksandar Kukolj of Serbia. Where Gasiev just missed the gold two weeks ago in Oberwart, now he won the final. The bronze was for World Military Champion Milan Randl, his tenth World Cup medal in his career. Krisztian Toth confirms to be among the best with a bronze medal. The European U23 champion lost to Gasiev though in the semi final. Kukolj threw Randl of Slovakia with a massive ko-soto-gake and was a favorite for the final. “I know the final will be tough”, Kukolj said. “I performed good judo during the tournament and managed to score with good techniques several times. But I knew that Gasiev would be a tough opponent. I made a mistake in ne-waza which he used extremely well. I am however satisfied with my performance here”, Kukolj said. Toma Nikiforov won the European Open in Prague. Last year at the same weekend he took silver in Warsaw, now he was able to beat Miklos Cirjenics of Hungary in the final by two wazari. The Belgian fighter did very well throughout the day and deserved the victory. “I am very much happy, it is my first victory in the European Open”, Nikiforov said. Jevgenijs Borodavko (LAT) took the bronze as well as Aldikhan Kozybayev (KAZ). During the tournament the Memorandum of Understanding about Judo for Schools between the EJU, Czech Judo Federation and Olomouc Region has been signed. “We are ready to support this project in our region”, Mr. Rozboril the governor of the Olomouc region said. “We understand the importance of the sport and we want to get back the kids from computers to sport activities, And judo seems to be the right activity”, concluded Mr. Rozboril. The competition was attended by Mr. Chladek, the Czech Minister of Education, Youth and Sports of the Czech Republic and also by Mr. Hulinsky, deputy Minister responsible for sports in the Czech Republic. Watch all pictures in our photo gallery