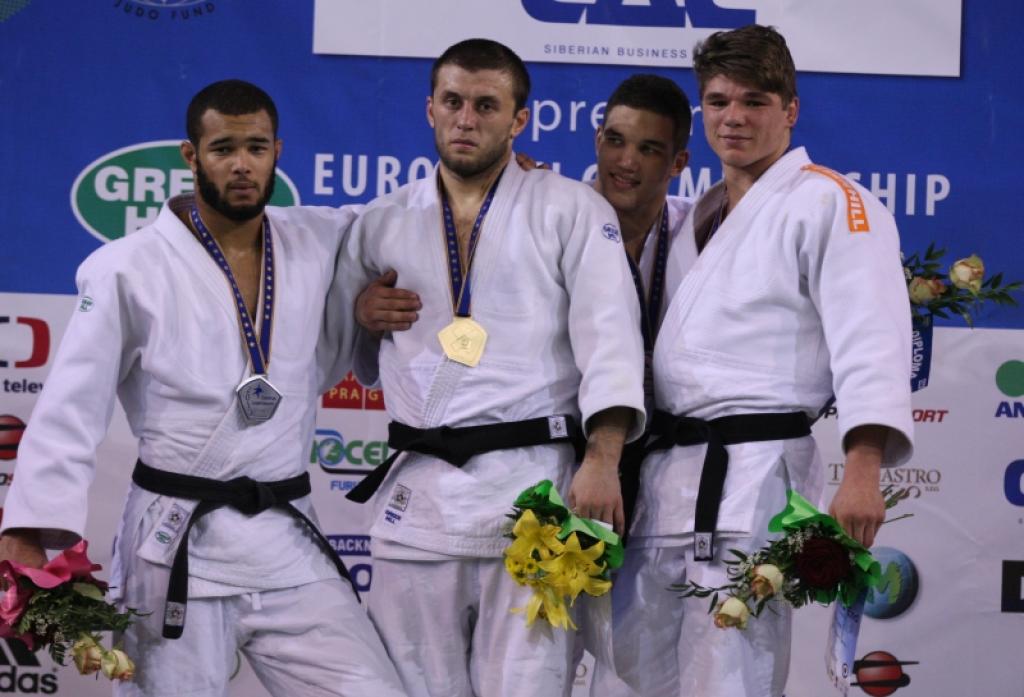 What a strong category, the men’s U90kg class! Great names who are already at a good senior level. The European U23 title was claimed by Russian Magomed Magomedov. In the final he defeated Quedjau Nhabali of the Ukraine.

After one minute Magomedov had an ultimate attempt to lift Quedjau and was awarded by waza-ari. A comfortable lead for the offensive Magomedov. However one minute later Nhabali countered with waza-ari too and the score was equal again. An open and great bout unveiled getting the ultimate interest of the crowd seeing a top fight.

One minute before the end Magomedov scored a yuko. Now it was Nhabali who needed to attack, but Magomedov who is a littler smaller could continuously dive under the Ukrainian and won time. In the last attack of Nhabali, Magomedov took over move of Nhabali and scored his second waza-ari. He prolonged his title of last year in Tyumen.

Magomedov faced some tough opponents in his road to the final. In the semi final he defeated Alexandr Jurecka who was heavily supported by the home crowd. Magomedovs quarter final against Celio Dias was man to man and twice the fighters landed in the boarding. In the end it was Magomedov to score by ippon in a heroic fight.

At the bronze medal fight of this tough category it was Noel van ‘t End of the Netherlands to win the first medal. He defeated Russian Kazbek Zhankishev. The number two of the European Cup ranking lost against Czech Alexandr Jurecka in the quarter final but came back with a good match against Celio Dias (POR) and finished the bronze bout with with an immobilization of Zhankishev.

The other bronze was for Hungarian Krisztian Toth. He lost a tough match against Quedjau Nibali in the quarter final. In the first round he defeated Yannick Gutsche (GER). In the repechage he came back win a victory against Aleksandar Kukolj (SRB). Home fighter Alexandr Jurecka had a good tournament but lost his semi final against Magomed Magomedov (RUS) and couldn’t prevent the victory for Toth although the Hungarian needed the full five minutes to win by a penalty for Jurecka.

The day asked a lot for the fighters as well as for Magomed Magomedov who was actually ill today and was assisted by the doctor. Despite his feeling he could make a little dance on the tatami after his victory.