Magomedov pretty sure of Olympics after second European title 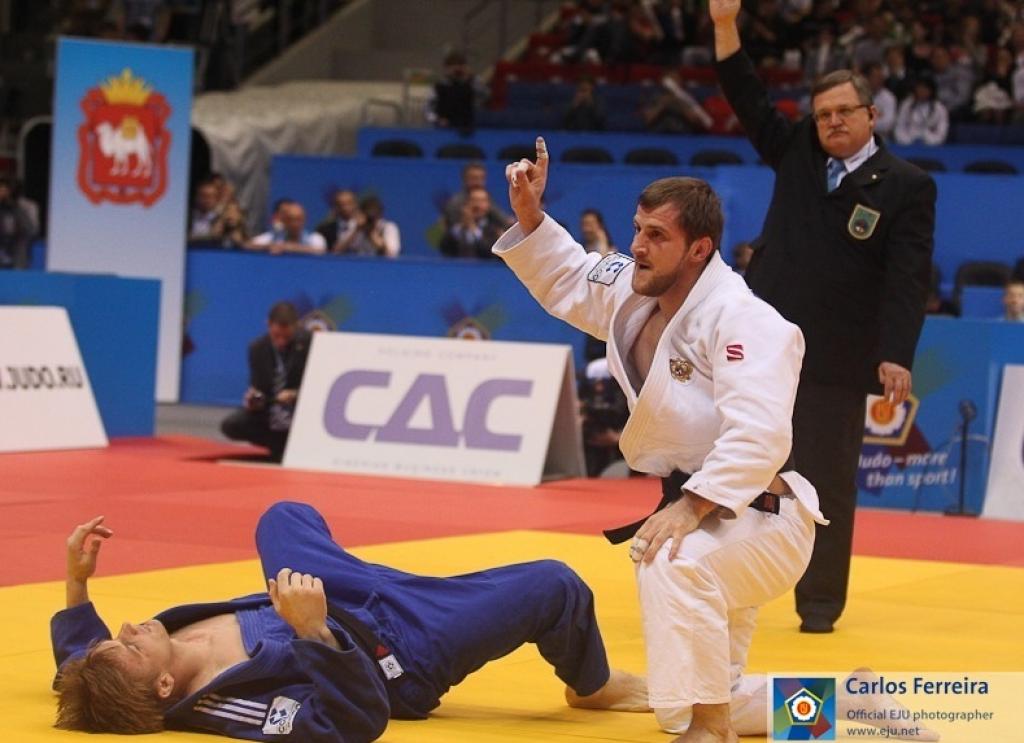 Sirazhudin Magomedov built up quite some reputation U81kg. Despite the competition in his own country he won three European medals in a row. Today he won back his European title of 2010. In between he won bronze in Istanbul. He treated the homecrowd with a delicious meal: an all Russian final U81kg. Sirazhudin Magomedov as the favourite but with an eager Murat Khabachirov to move on and take the crown. The 2009 World Champion Ivan Nifontov is even still injured so what a choice in Russia. Magomedov is without a doubt the highest seeded ranked number six in the world.

This category is a mixture of nations of all continents varying of Asia, Europe and South and North America. 25-Year old Sirazhudin Magomedov was the strongest today and defeated Valeriu Duminica (MDA), Lic Pietri (FRA), Joachim Bottieau (BEL) and Konstantin Ovchinnikov (LAT) on his way to the final. A tough road though as both Bottiea as Ovchinnikov won a bronze medal.

Khabachirov did well though today and he used the public to motivate him for the right vibes in today’s matches. Also he enjoyed the enthusiastic crowd filled with thousands of judo fans in Chelyabinsk.
Although Magomedov cannot yet be compared to the old Soviet warrior and stylist Bashir Varaev who won the European title U78kg four times in a row, Magomedov is typical for the new generation Russians who are knocking on the doors to reach Olympic success.
“I am very, very happy right now but also very tired. I had a lot of difficult fights. My opponents were using their strength, while Murat and myself are more technical fighters. As we are two Russians fighting, the coaches don’t say much. We are getting into the right mood ourselves. I think I am at 60 percent of my ability right now. I performed much better in Turkey last year at the 2011 European Championships, but my opponents were much easier to handle there. It is up to our coaches to decide who is going to the Olympic Games, but I think with my victory here I made an important point for myself.“

The man of today’s silver said on winning his first medal at Europeans: “It is a nice feeling to fight against a compatriot. I know him very well. He was just lucky. I made a mistake and fell for his favourite trick, that’s why it came out that way. I felt a little tired. I had a very hard match right in the first round against the Italian Antonio Ciano”Khabachirov said. But he came back strongly and convinced himself and the public to qualify for the final after defeating Diogo Lima (POR), Axel Clerget (FRA) and Alexander Wieczerzak from Germany in the semi final.

For the German the last fight was too much. The Belgian fighter Joachim Bottieau did what he had to do, win a medal to realize Olympic qualification. Although he had the right position within the top 22, he had to win rank top 5 to convince his NOC to be qualified. So he is the Belgian judoka to qualify for the Olympics in this category since Johan Laats in 1996 U78kg.

Bottieau commented on his bandage “In my second fight, I was leading and then the Georgian Levan Tsiklauri head-butted me and was disqualified. It was hurting a little but it wasn’t too distracting for me. But I had to be careful that it didn’t start bleeding. I could have been disqualified if it was bleeding too often. I can only get three times medical attention during a match. I am very pleased with my result. I needed to be minimum fifth in order to go the Games.“

All nine European Championships medals of Latvia were won by a man, however never a title. Today Konstantin Ovchinnikov won his first. His general secretary Vsevolods Zelonijs was a happy man. He won five of the nine medals himself. But after his win over Avtandil Tchrikishvili of Georgia also Ovchinnikov was satisfied with bronze although his personal expectations were higher in advance. “I wanted to make the final and I am not happy about how the semifinal went. But it is as it is. This is my first senior level medal at the Europeans, I was fifth before. Now I am very tired.“

Watch all pictures of the medalists and all action pictures in our media gallery: