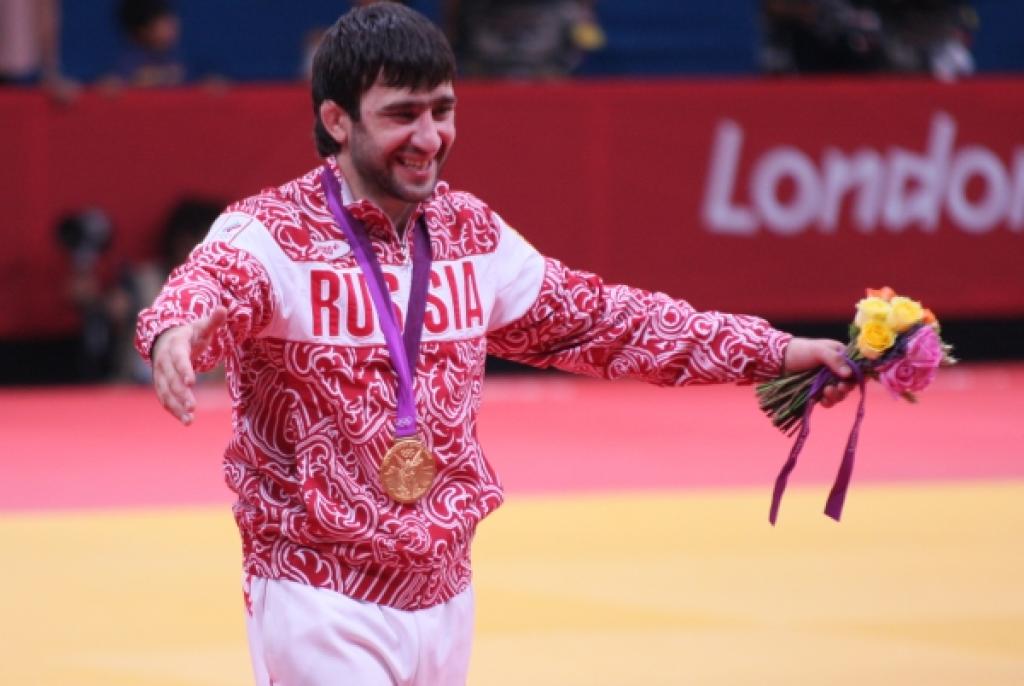 Another Russian Olympic champion at day three of the Olympic Games. Mansur Isaev was the winner of the men’s category U73kg in the ExCel on Monday. The Russian defeated Riki Nakaya in a fantastic competitive final. After Saturday’s Olympic title of Arsen Galstyan this is the second victory for Russia. Another European won a great medal, bronze for Ugo Legrand who was able to defeat 2009 World Champion Wang Ki-Chun (KOR).
The second bronze medal was captured by Mongolia after Nyam-Ochir Sainjargal overcame Dex Elmont of the Netherlands.

After winning a bronze medal at the 2009 World Championships in Rotterdam, this is by far his best success for Isaev who wasn’t expected on the highest stage. World Champion Riki Nakaya was today’s favourite but had never met Isaev who did the unbelievable with a take over of Nakaya who was more active and seemed to dominate the final. But the smart Isaev kept calm and stroke at the right moment taking a yuko difference that he never gave away.
In the semi final Isaev defeated Wang Ki Chun. They had fought 6 times against eachother and Wang won all 6. That’s why they call it the Olympic Games where anything can happen as everything counts.

What a great success for coach Vitaly Makarov who himself lost the final U73kg at the 2004 Athens Olympic Games. Now he could close his judoka in his hand and share the victory. What a success for the Russian Federation as well who is now leading the medal tally. EJU President Sergey Soloveychik presented the flowers to today’s winners and congratulated Mansev.

The winner said: “I feel great. I am so happy for Russia and that our country can be proud of this medal. I want people to understand that we have worked so hard these past four years not just like this but to fulfill this dream. This gold medal is a cumulation of all your efforts, all your training, all your preparation.”
“I was very concentrated, absolutely focused. I did not do anything unnecessary. I knew what I wanted and where I was going. My coach told me ‘today you are at our peak’. He told me that after the first matches. He said ‘you do not have to worry, you can get there, to the gold medal.'”
“It was a hard match against the Korean (WANG Ki-Chun). He is an Olympic silver medallist (Beijing 2008) and a two-time world champion. I met him six times before and I lost six times. Nothing motivated me me more than finally to win. I wanted to prove not only to him but also to myself that I am the best.”

In the women’s category Corina Caprioriu could not prevent a victory for Japan’s Kaori Matsumoto who was the undisputed favourite in advance. Although he had lost this year to Telma Monteiro, she impressed everyone. Monteiro (POR) lost in her first bout against the amazing Marti Malloy who defeated a lot of strong judoka and definitely had the American flow supported by Jimmy Pedro, another legend who fought heroic fights with Vitaly Makarov, today men’s successcoach.

Caprioriu defeated Malloy in the semi final. Automne Pavia from France captured a bronze medal today. After her loss against Matsumoto she defeated Hedvig Karakas (HUN) for bronze. Also for Karakas a good performance but the cheers were for Pavia who was congratulated by French President Francois Hollande who witnessed two French bronze medals.

Read all reactions later on in our Community, Twitter and in our Facebook with all possible quotes of the European athletes.
http://community.eju.net/judofriends/judo_blogs