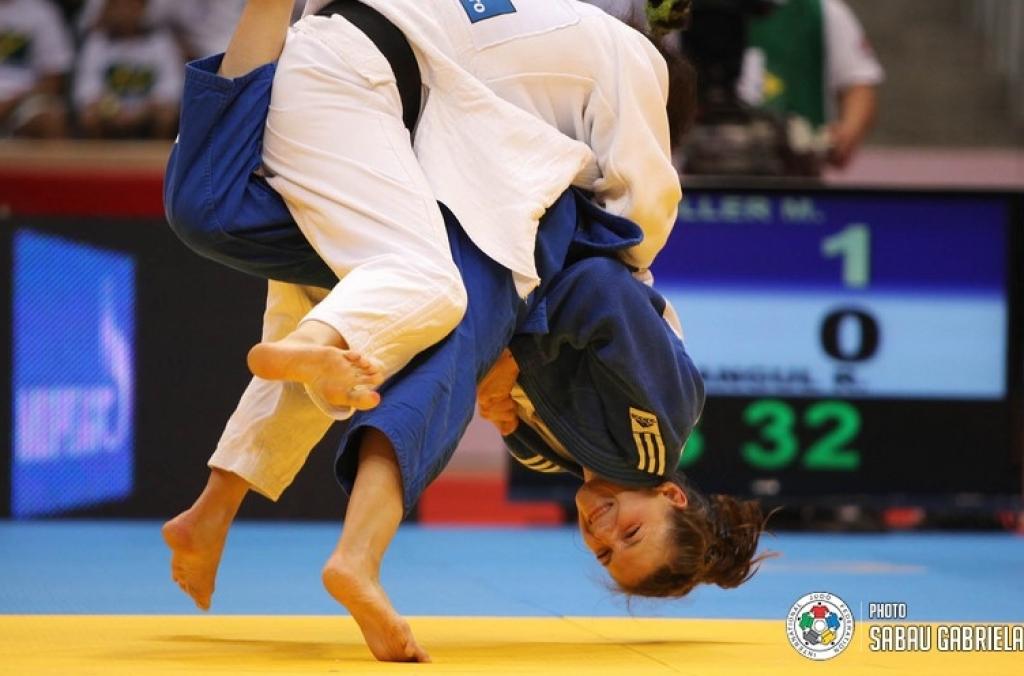 The women’s categories get more and more competitive. Today the U52kg was very exciting with Marie Muller from Luxemburg as final winner. Muller is in a good form. Recently she reached the final in the Grand Slam of Rio de Janeiro in a very competitive list of participants. Today she beat Marine Richard (FRA) in the final who recently won the IJF World Cup in Cairo.

Muller defeated He Cancan from China in the semi final and didn’t have to fight against World Junior Champion Majlinda Kelmendi of Kosovo who represented Albania today. Kelmendi lost to the Chinese He but won the bronze medal in the end. The World Junior Champion had only lost twice this year of Natalia Kuzyutina (RUS) and Penelope Bonna (FRA) but was now surprised by the Chinese by ippon.
Kuzytina who seems to be Europe’s strongest also lost just two times; against Munkhbaatar Bundmaa (MGL) in Sao Paulo and against Marie Muller, stating that the Luxembourg judoka is becoming one of Europe’s top favourites in a small country like Luxembourg. She is competing in this class since 2005 and won her first and previous World Cup in Birmingham in 2008. Muller is someone who may be able to reach the top 8 at the World Championships later this year in Tokyo.
Muller in fact is now the best ever judoka of her country. With this win she passed Igor Muller who won one World Cup. The couple is responsible for the total of Luxembourg’s modest World Cup collection.

In the lightweight class U48 it was Carmen Bogdan (ROU) who took the title. In the final she defeated Natalia Kondratieva from Russia. For 25-year old Bogdan it was her first ever World Cup victory. Last week she finished second behind Alina Dumitru (ROU), her fourth lost final. But today she could finally beat Kondratieva who had beaten her twice before in 2008 and 2009.

Another Romanian, Corina Caprioriu was the favourite to win the title U57kg. But she finished fifth today as she lost to Miryam Roper (GER) and to Automne Pavia (FRA) for the bronze.
Another prove that this category is getting highly competitive, and at the moment even the most competitive of all women’s categories. Led by Kaori Matsumoto (JPN) who hasn’t lost for 19 consecutive matches, Hedvig Karakas (HUN) is one of the followers of the Japanese superfighter. Today the Hungarian won this category by her win over Audrey La Rizza. The French made the step to this heavier category in October last year, but already won several medals in this class, including the French title.
Karakas has already fought 26 matches this year, lost seven and won nineteen matches. Matsumoto beat her twice this year, as well as Automne Pavia. But today Karakas beat Pavia in the semi final. What a progression she is making.
Last year Karakas won 40 out of 50 matches! An amazing number of matches and an impressive win percentage.

Alice Schlesinger (ISR) won the title U63kg, a welcome win for the 2009 European U23 Champion. Schlesinger who had won bronze at the World Championships last year didn’t compete too much so far and lost three times in an early stage.
Today she defeated Svetlana Chepurina (UKR) in the final and won her first World Cup ever. The 22-year old Israelian competes in this category for a long time (since 2005) but already at the age of 16. Today she finally collected another milestone in her career.
France won five medals today, but none of them were of gold. Nonetheless the French women are leading in Europe with the most World Cup, GP or GS wins. Ten wins, four more than number two Romania, now following with 6.