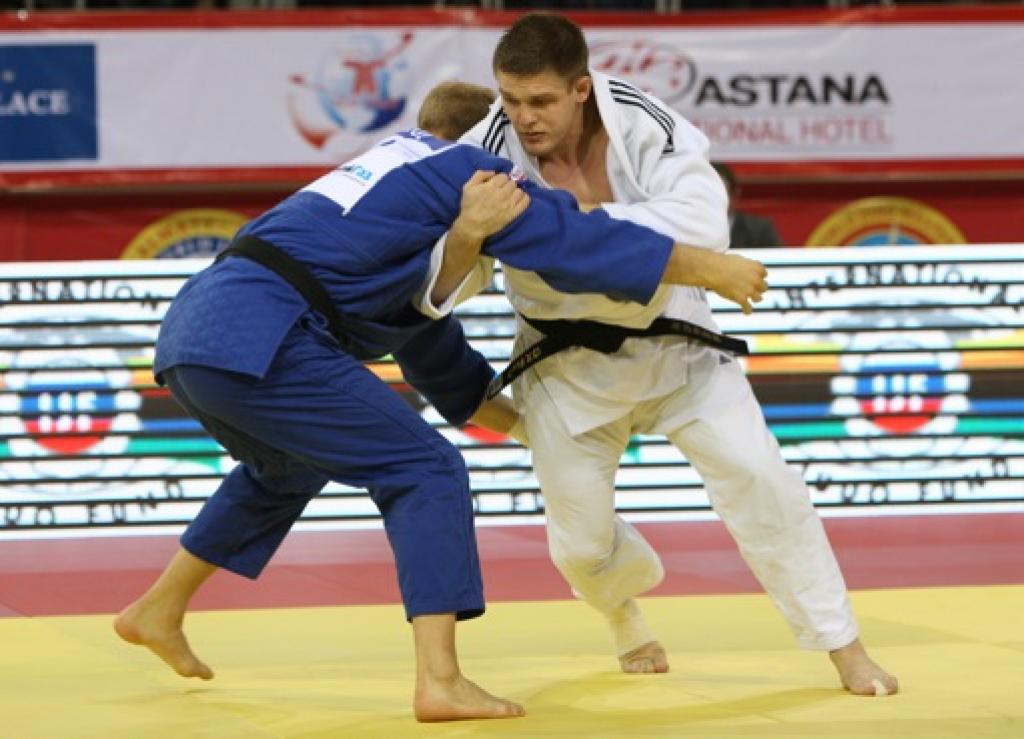 The second day of the Judo Masters in Almaty offered very tight and tense fights with many spectacular techniques. For the homecrowd the gold for Maxim Rakov was the highlight, although the decision was based on hantei where not everybody was convinced on the tough decision.

In his category U100kg Maxim Rakov (Kazakhstan). Fought a close final, the public favorite, the 2009 World Champion, Maxim Rakov who won that world title in The Netherlands against Henk Grol, ended in hantei.
Grol, the Bronze medalist at the 2008 Olympic Games, did not understand the decision of the referees but is focused at the Olympic Games gold medal.

In the first semifinal ended in a surpise. Takamasa Anai, Japans favourite, was defeated by ippon by Rakov, the number 4 on the IJF WRL with a devastating Okuri-Ashi-Barai.
In the second semifinal Sergei Samojlovich (Russia), the number 2 on the IJF WRL lost against Grol, the world’s number 3.

Elnur Mammadli from Azerbaijan won gold in the first final of the day in a spectacular bout, with beautiful techniques. In the end, the 2008 Olympic Champion (U73kg) won by ippon in 2.25 minute (hip technique /
koshi-waza), against Takahiro Nakai (Japan), the number 5 on the IJF World Ranking List.
In the first semifinal, Mammadli defeated Euan Burton (Great Britain), the number 14 on the IJF WRL. Nakai beat Sirazhudin Magomedov (Russia).

Lucie Decosse is still the strongest U70kg. The World Champion of 2011 was able to collect the gold medal in Almaty by defeating Yoriko Kunihara by immobilisation / kansetsu-waza). One of Decosse’ rivals Edith Bosch was not able to fight the semi final against Kunihara due to fever. Decosse defeated Haruka Tachimoto, the number 5 on the WRL.

In the men’s U90kg category Masashi Nishiyama was able to beat Kirill Voprosov from Russian. Nishiyama had also beaten world champion Ilias Iliadis and was a good winner in Almaty. In the semi final he beat former world champion Tiago Camilo (Brazil).
In the second semifinal, Voprosov (Russia), the number 14 on the IJF WRL, won against the South American Champion, Hugo Pessanha (Brazil).

Brazil was good anyway as they won the gold U78kg in the women’s division by Mayra Aguiar. In the final, the silver medalist at the 2010 World Championships won in one minute (foot technique / ashi-waza) against Xiuli Yang (China). The 2008 Olympic champ beat Akari Ogata in the semi final.
Aguiar won against a strong Anna Velensek from Slovenia, a good performance of the only European on the stage.

A second gold for Brazil was won by Rafael Silva. The final offered a spectacular contest, with a series of attacks and counterattacks. Silva defeated the 2010 World Champion Daiki Kamikawa (Japan), earning a
well-deserved gold medal as Silva also defeated Andreas Toelzer who is considered a serious medal candidate at the Olympic Games. Islam El Shehaby collected a bronze medal despite his loss against Kamikawa.

Many Chinese finals we have witnessed between Tong Wen and Qin Qian. Most over it was Tong to win, but in Almaty Qin Qian won the gold as Tong was not able to fight the final against her compatriot.
Tong did beat Gulzhan Issanova from Kazakhstan in the semi final. Qin Qian beat Mika Sugimoto who grabbed the bronze medal.