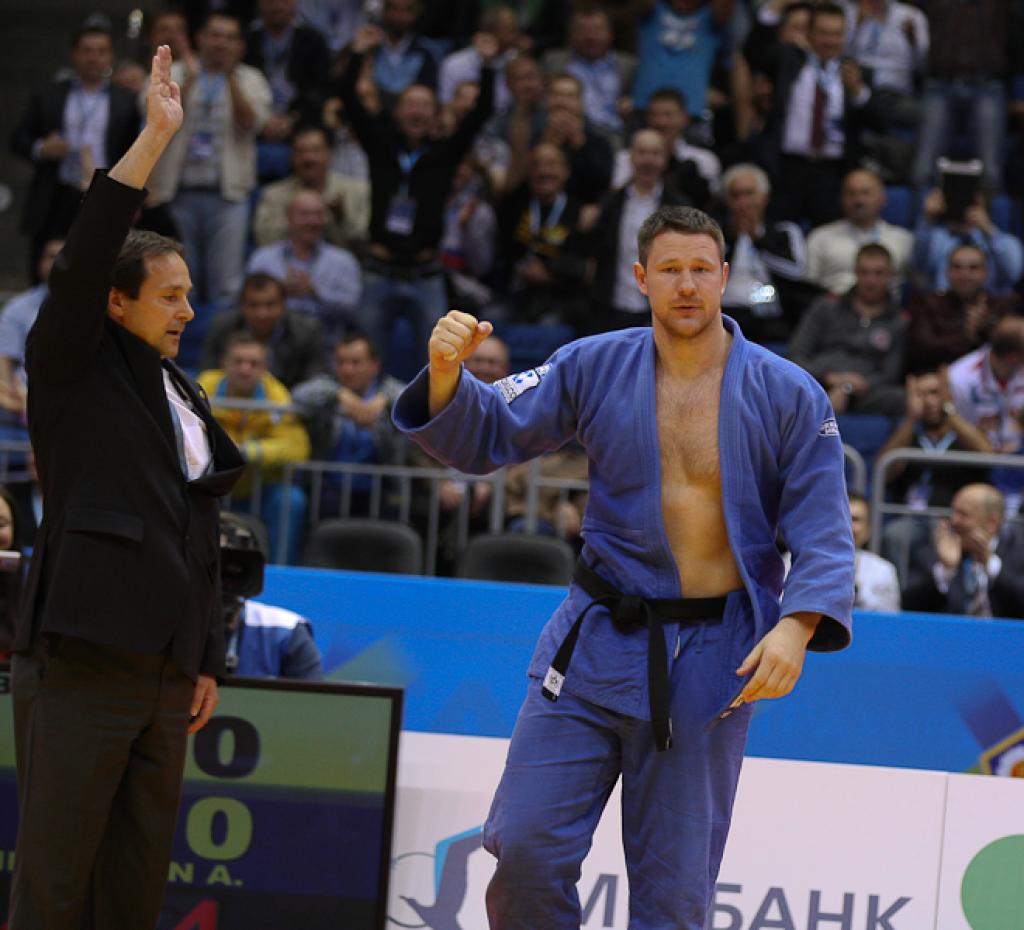 What a day for Russia winning two gold medals. Good old Alexandr Mikhailin, aged 32, won a surprising gold medal for his nation. After 36 seconds he destroyed Barna Bor of Hungary by an athletic throw and won his sixth European title in his great career. Mikhailin is triple World Champion in the beginning of the millennium but wasn’t always lucky in the qualification for Olympic Games. Now he will go to London and he convinced everybody in the world that he is still capable of stunting his way to gold. The last trick in his career got the final boost here in Chelyabinsk.

Alexander Mikhailin (RUS) enjoyed his win a lot.“I have the most positive emotions right now. I won my sixth gold medal, which is really nice. It was like a last exam before the Olympic Games and an opportunity to check on my mistakes. There were still enough mistakes. Now I hope for a good result at the Olympic Games. Today I felt the support but also some pressure. But I showed some good throws and did what I can do. I think I didn’t disappoint the fans in the final. In three months I’ll be even better.“

In his road the final he defeated Or Sasson (ISR), Matjaz Ceraj (SLO) and Janusz Wojnarowicz (POL) in the semi final.
What a sensational win by Mikhailin who took the fifth gold medal for Russia this tournament.

Janusz Wojnarowicz won his third bronze medal in a row. Quite a performance knowing that seven times before he lost his last fight. Three seventh places, fifth in 2009 and two lost finals in 2005 and 2006. But since 2010 he knows how to play the games. Adam Okruashvili was the victim. He won a bronze medal at the age of 17 in 2006 , but has lost the magic at European Championships.
Bronze medallist: Janusz Wojnarowicz (POL): “Of course I came here to win, but the bronze medal is also good. It is my fifth medal, I got two silver and three bronze now. The last fight was the best for me.“

Mikhailin won the ninth medal for Russia in total and his 11th in his own career. Eight countries heard their national anthem for their gold medal this championship. 21 Countries of 45 participating nations won a medal in total.

Tomorrow we will see the teams in action. Tune in again and follow our twitterfeed @judoeurope for the hottest records, quotes and news.