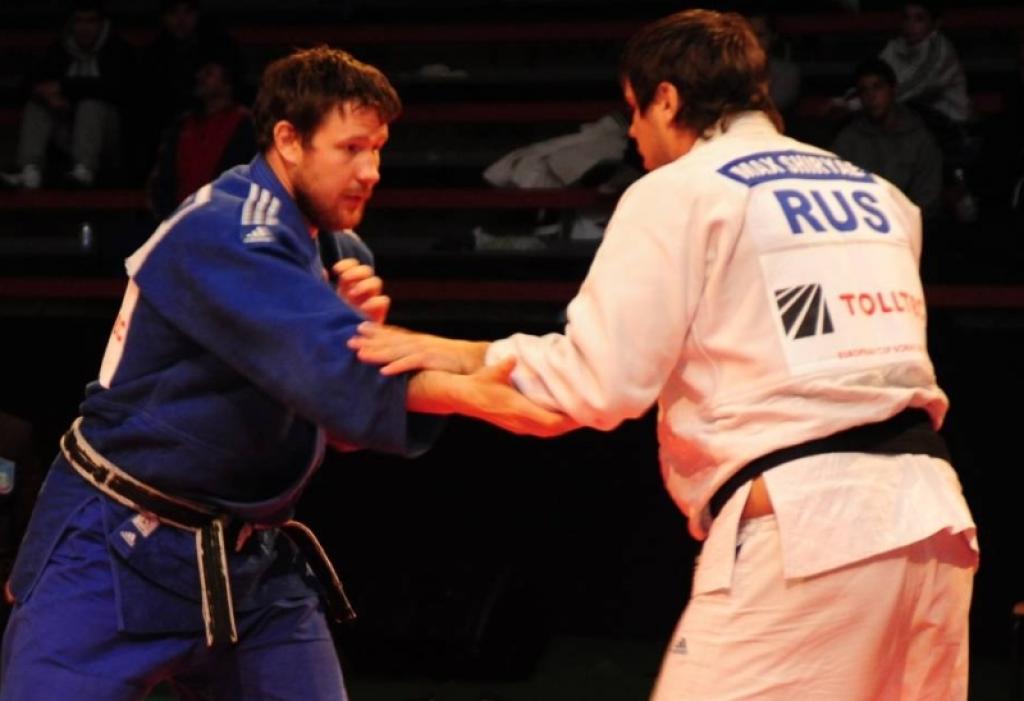 When, as a fresh faced 16 year old, Alexander Mikhaylin (RUS) collected a bronze medal at the European Youth Olympics in 1995 he showed every sign of being able to go far in the sport. And so it proved. That early promise was put to a tough test in the final of the Junior World Championships in 1998 when Mikhaylin defeated Muneta Yasuyuki (JPN) in the +100kg category.
It was the first of many battles that the two would have over a ten-year period, Mikhaylin coming out on top in all but one of their encounters. The Sydney Olympics in 2000 were a year too early for Mikhaylin and it was his great rival and team-mate Tamerlan Tmenov (RUS) that came away with a bronze medal.

By the time of the World Championships in Munich in 2001 Mikhaylin was ready to take on the best in the world and he did so in emphatic style winning both the +100kg and the Open. He set his sights on the Games in Athens in 2004 but, with Tmenov still Russia’s choice at +100kg, Mikhaylin was forced to drop down a weight and seek to qualify at -100kg. In the end it was Dimitry Maximov (RUS) who, having defeated Mikhaylin in the final of the 2004 Moscow Tournament, went to Athens at 100kg coming back empty handed. Tmenov continued his Olympic success at +100kg coming away with silver having lost to Suzuki Keiji (JPN) in the final.

The -100kg experiment was quickly aborted and in 2005 Mikhaylin set about wiping out all opposition in the +100kg winning Moscow, Hamburg and Bucharest all before taking the European title in Rotterdam. The World Championships in Cairo saw Tmenov in the Open where he took silver behind Dennis van der Geest (NED). Mikhaylin, however, was unstoppable and he claimed his second world championship gold at +100kg defeating Muneta in the final. What a year 2005 was for Mikhaylin and to crown it all the European Open Championships were being held at the year end in Moscow.

Mikhaylin duly made his way to the final and, with the fairy tale year almost complete, only Tmenov stood in his way. Mikhaylin, for so long “King of the Open”, lost his crown on home soil and, worst of all, it was to Tmenov his great rival for the +100kg spot.

Mikhaylin was selected for and won the European Open in 2006 in Novi Sad, whilst Tmenov took 3rd place in the +100kg category in Tampere. Then in 2007, Mikhaylin was selected at +100kg for the European Championships in Belgrade, where he placed 3rd, as well as the European Open in Warsaw which he won. That 3rd place finish in Belgrade left the door open for Tmenov who, given the chance at the European Championships held in Lisbon in 2008, swept all before him taking the gold medal and with it any real chance of Mikhaylin going to the Beijing Games in 2008.

With Tmenov retired, and Mikhaylin handily placed at 29 in the IJF World Ranking List, London 2012 could be the venue where the judo world finally gets to see Mikhaylin realize his dream. Before that, however, he will have to make his way through the qualifying process and a successful visit to Tbilisi this weekend could give his chances a big boost. Mikhaylin’s last outing to Tbilisi brought him a bronze medal at the European Championships in 2009. The winner that year was No.1 seed here Martin Padar (EST) who coincidentally won the European Youth Olympics in 1995 ahead of Mikhaylin. That seems like a lifetime ago. Nevertheless, the desire for a shot at the Olympics is clearly a burning desire for the Russian judoka who has already achieved so much.