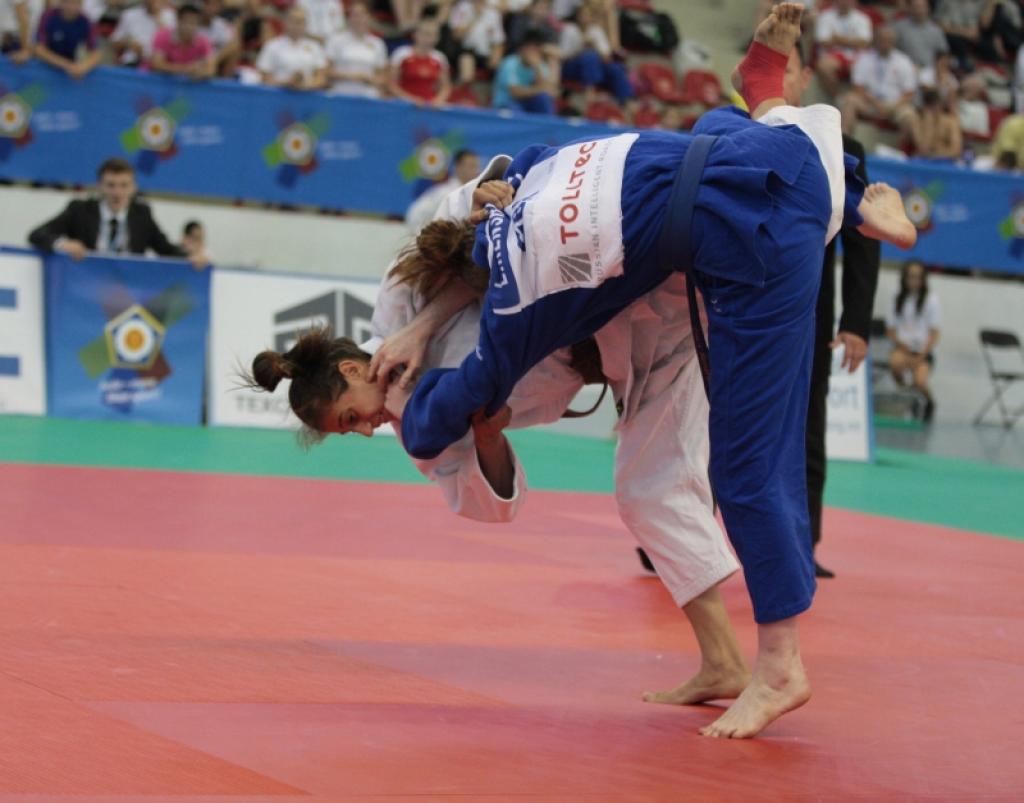 Just like the first day, the second day in the women´s division was a mixture of winning nations. The winners of today came from Romania, The Netherlands and Great Britain.

Romania’s Alexandra Florian needed just five seconds to destroy Lucy Renshall of Great Britain. Although Renshall had a good tournament today, no one could measure with Florian today. She defeated five rivals with good judo and impressed everybody with her rocket start and finish.
Florian also won her first match of the day in just four seconds. Her coach is the triple European Champion in Kata, Nage no Kata, Aurelian Fleisz. So she has a huge judo back ground and that may have been the reason for her great technique and dangerous uchimata.
Last year Florian finished fifth but in Malta she was able to take the gold. In the semi final she defeated Zarina Babinyan (RUS). Renshall had defeated Megane Mattei of France in the semi final and came over number one ranked Szabina Gercsak of Hungary.
Florian from Oradea has a great future given the fact that not even Olympic Champion Alina Dumitru was able to win a medal at European U17 Championships. Florian won the first European title for Romania in this age category since 2004 when Violeta Dumitru won gold as well as Cezar Rusu.

Netherlands takes gold U57kg
The final U57kg was between two great fighters of two well known young women, Do Velema of the Netherlands and Kevser Cevik. They know eachother for a long time in many youth events. Cevik had an advance by defeating Velema this year in Sindelfingen, but Velema excels in staying cool at all time. She showed that in her semi final against the other Turkish rival Selin Gul.
Velema won the European Cup in Coimbra (POR) in April, Cevik won in Ploiesti. Both fighters are rights sided and couldn’t score in the first four minutes despite good attempts from both sides. Velema showed her dangerous maki komi but couldn’t get to a score.
In the golden score Velema seemed to be stronger but without a result but made the difference in the match by a convincing end of the Dutch girl. The referees agreed with her efforts and gave her a unanimous golden decision.
Last year Dilara Incedayi won gold for Turkey, Kevser continued that success stating that the Turkish girls are still booming.
For Cevik an important medal as it will give her a good chance she will represent her country at the Youth Olympic Festival in Trabzon next month. Then her fanatic family who are living in Germany can again support Kevser. Netherlands was back on track after a weak start yesterday, but the gold already equals last year’s gold medal of The Netherlands.
A good success for 2000 Olympic Champion Mark Huizinga who is the headcoach of the Dutch women’s team since this year. Although Velema was coached by her club coach Zeger van Oirschot, Huizinga teaches the Dutch judoka a better ground technique to make a difference these days.
Huizinga is not the only former top athlete. This tournament also World medallist Sara Alvarez (ESP) and European medallists Nigel Donahoo (GBR) and Amina Abdellatif (FRA) came in action as a coach.

It was a good day for Romania anyway with gold for Florian and a medal chance for Stefania Dobre against Selin Gul from Turkey. The strong Turkish Gul was the number one in the Cadets ranking in advance, but lost her semi final against Do Velema. Against Dobre she exploded after two minutes with an excellent ippon by a seoi nage and won the bronze.
The other bronze medal was for Italian Giulia Corrieri winning against Adi Valier Grossman (ISR) by a hold down.

Britains got talent: Yeats-Brown´s takes gold
The final U63kg was won by the strong British Katie Jemima Yeats-Brown who defeated the tall Patricija Brolih from Slovenia. Yeats-Brown stroked with an great ippon after one minute. Gold, silver and bronze for Great Britain, a good result. Great Britain didn’t have any European Champion in this age category since 2005. Abbie Cunningham (GBR) was the only Brit to win the European U17 title twice in 2002 and 2003 but Yeats-Brown is an exceptional talent who promises the same performances.

Krisztina Polyak didn’t have to fight in her bronze medal fight against Russian Diana Dzhigaros who got unconscious but a strong choke in her semi final against Brolih.
A great height difference between the small but dangerous Lisa Marchese of France and Maryna Heryatovich (BLR) was stunning but didn’t bring the essential difference in the match. Marchese who has a good seoi nage won by default when Marchese got Hansokumake because of leg grabbing. Unfortunate reason to end a medal fight of a high quality category.

Enjoy the video footage in our You Tube Channel and pictures at this website. You can follow the video stream on Sunday again with a start at 11.00 o’clock.