Mongolia knocks on the door of international judo 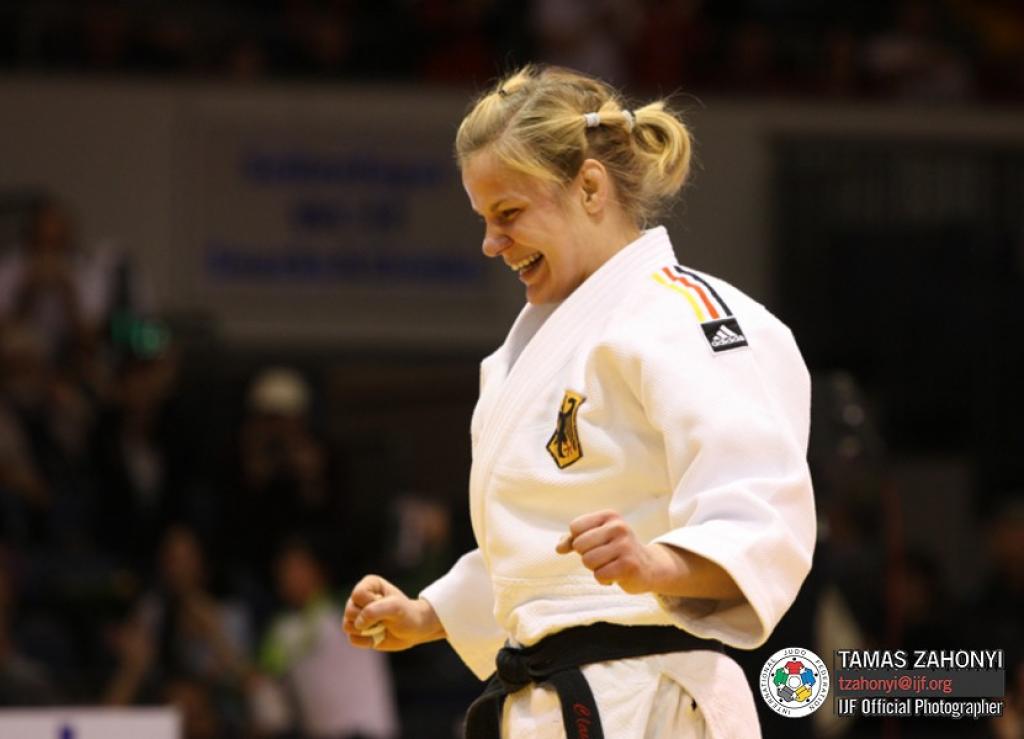 At the IJF Grand Prix in Düsseldorf Mongolia showed great judo in the Philipshalle. But given the list of medallist, the participants list was strong today in the lightest categories.

Zantaraia spectacular
Spectacular judo in the U66kg class. World Championships silver medallist Hiroaki Hiraoka (JPN) defeated Davaadorj Tumurkhuleg (MGL) in the semi final in 24 seconds. World Champion Georgii Zantaraia (UKR) defeated Gwang-Hyeon Choi (KOR) with a powerful ippon in the semi final, so a forthcoming repetition of the World Championships final in Düsseldorf. And it was spectaculair. A final between two dynamical and unbelievable judoka was a gift for the judofans. It was Zantaraia who needed two minutes to score and finish Hiraoka on the ground and taking over the leadership at the IJF World ranking from Hiraoka.

Fukumi prolongs U48kg title
The Japanese have proved to be exceptional strong this season. The final U48kg was again between two Japanese fighters. IJF World Ranking leader Tomoko Fukumi defeated Haruna Asami. Asami had beaten Olympic Champion Dumitru in the semi final. Dumitru suffered a serious shoulder injury.
Fukumi lost to Asami time this year in the semi final of the IJF Masters in Suwon, but today it was Fukumi who won the gold in the golden score via a penalty and prolonged last year’s title.

Dumitru (ROU) was not happy with her injury but was able to pick up her bronze medal. Olympic bronze medalist Paula Pareto (ARG) took the bronze as well.

Algerian women successful
Algeria was again successful in the women’s category. This time 25-year old Soraya Haddad won the final U52kg against Joana Ramos (POR). Haddad won the fourth ever World Cup for her country, a unique happening. Only Salima Saoukri won a World Cup twice, for the last time in 2002, and Nourredine Yagoubi won in Rome in 1998 in the men’s U73kg category.
Ramos won her 10th World Cup medal but lost her 5th final.

Algeria won in total 25 World Cup, Grand Slam or Grand Prix medals, 17 for the Algerian women, 10 of them for Salima Souakri who is now one of the Algerian coaches.

32-year old Ilse Heylen (BEL) is still in a good shape and won the bronze, just like in Paris this year. She shares the bronze with Mareen Kräh (GER) who defeated Kitty Bravik for the bronze.

Tsagaanbaatar confirms World Ranking status
World Champion and IJF World Ranking leader Khashbaatar Tsagaanbaatar (MGL) defeated An Jeong-Hwan (KOR-7) in the final U66kg. So far An defeated Tsagaanbaatar twice, the last time one year ago in the semi final of Paris.
But today it was Tsagaanbaatar who took the lead from the start and was only working towards the victory that came after three minutes.
Tsagaanbaatar won his third ever World Cup in two years time.

Rok Draksic (SLO) makes a strong series of events since November 2009 when he won the European U23 title, and winning the EJU World Cup in Vienna last week. Today he won the bronze in Düsseldorf. Loic Korval of France won the bronze too.

Matsumoto keeps on winning U57kg
Telma Monteiro (POR) needed 31 seconds to beat Corina Caprioriu in the semi final U57kg and had to deal with Kaori Matsumoto in the final, but the Japanese beat Monteiro ne-waza. In 2009 both judoka met three times in international events, Matsumoto won three times of the total of four confrontations.
Although Monteiro lost the World Championships final against Morgane Ribout (FRA) in August, she hardly loses World Cup finals. Of 14 World Cup finals she lost her 3rd today.
Monteiro is fighting for a victory for a long time. Her last victory was last July, at the IJF Grand Slam in Rio de Janeiro.

Kaori Matsumoto took revenge in the semi final at Hitomi Tokuhisa who defeated her in the final of the Grand Slam of Tokyo in 2009. But Matsumoto won the IJF Masters in Suwon and the Grand Slam of Paris this year and added the Grand Prix of Düsseldorf today to her impressive career overview.

Mongolian judoka knocking on the doors
Sainjargal Nyam-Ochir (MGL – 23 years) won an international IJF event for the first time in his career by beating 30-year old experienced Ulan Gurtuev (RUS) U73kg. Gurtuev had an excellent day and never won an international medal at this level. But Nyam-Ochir built up the lead by penalties and never gave it away and scored one waza-ari on top to take his first Grand Prix victory in his career.
Nyam-Ochir won the 18th World Cup for his country Mongolia, 11 in the last two years, saying everything about judo in Mongolia.

Happy German end
The final U63kg was a fantastic end for the present and excellent fans in the Philipshalle. German Claudia Malzahn (in the picture) was rewarded an ippon after watching the video footage just after her point. A fantastic present for the crowd who could see the slow motion of the takeover of Malzahn at the big screen in the hall. Malzahn who won the bronze at the World Championships last year, again celebrated a great performance.

Dutch Anicka van Emden may be one of the most promising talents in this category. She defeated Olympic and World Champion Yoshie Ueno this year in Paris when she won the silver medal, but today she was less satisfied with the decision of the referees. Her 72-year old success coach Chris de Korte however complimented her for the progression made.

The German crowd sang the whole day, and could now show their talents during the national anthem which they hadn’t hear for a long time on home soil. It was Heide Wollert who was the last German winner in 2006. Tomorrow she can become the first to win three titles in Germany.

Tomorrow you can watch the video feed starting at 09.30 o’clock.