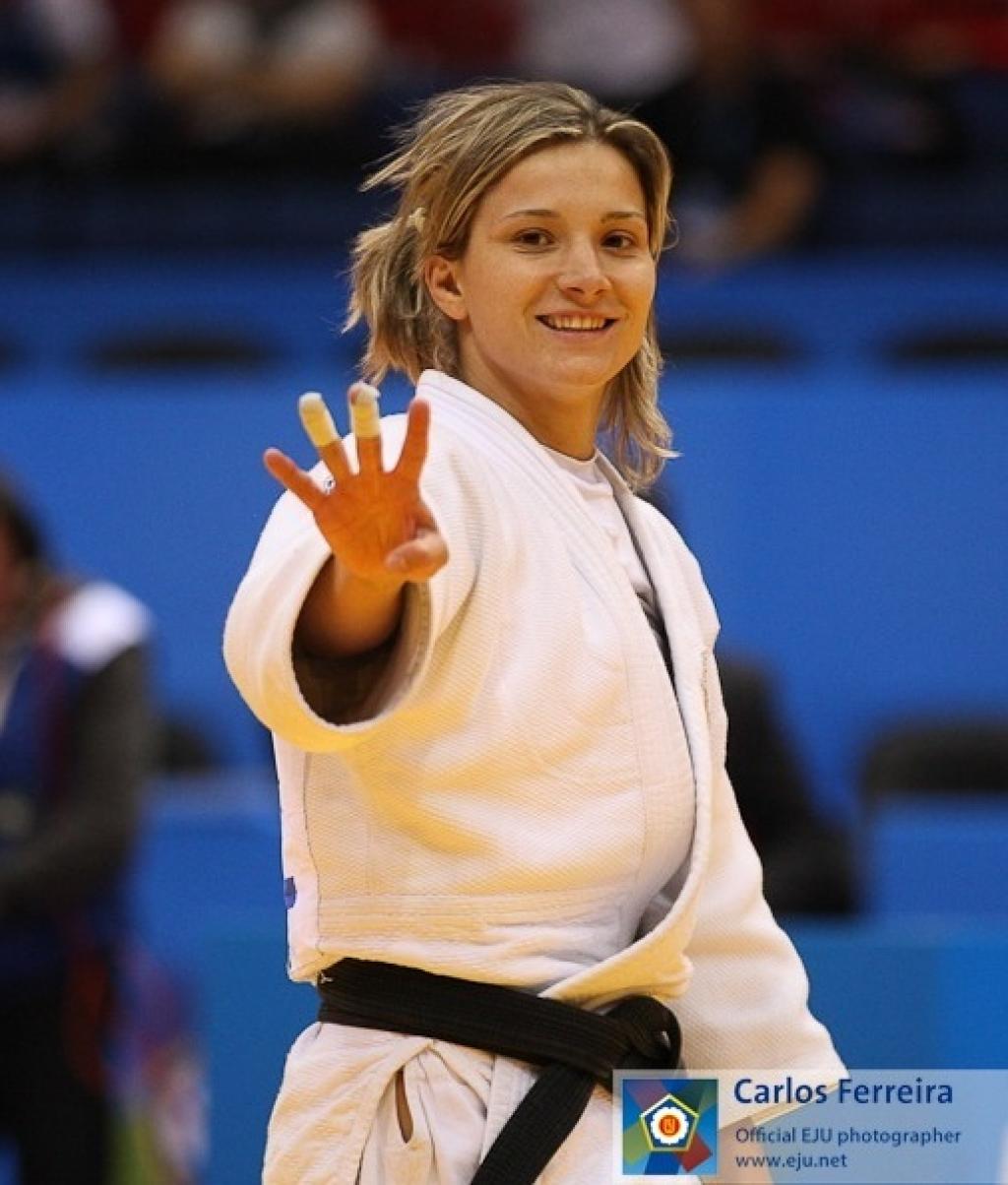 Telma Monteiro celebrates a good year with the European title and her fourth in her career. She is the outperformer in Portuguese sports. Today she confirmed how important the athlete is for Portugal and their hopes for an Olympic medal winning the U57kg category and gained back her title of 2009.
Monteiro defeated Ioulietta Boukouvala of Greece in the final. For Boukouvala is was her first European medal and he was happy after finishing fifth four times. Four fingers up when she reached the final in a tough match against Sarah Clark. Monteiro defeated Sara Loko in the semi final and outsider Hedvig Karakas in the quarter final.
Monteiro won the Tournoi de Paris this year defeating the Japanese opposition by Aiko Sato the world’s number two behind Kaori Matsumoto. Monteiro is the number three of the world and Europe’s best. “This is a very special victory. I really wanted that title. It is important to me. I wanted to win and I want to be the best and it is amazing when it happens. This title is a big motivation for me for the Olympic Games, but I still have to work a lot. This was a good day but it doesn’t decide about the Olympic Games. I have to keep working.“

Monteiro defeated Boukouvala for the third time in this tough category with many judoka who can win a medal at the Olympic Games. A strong category in Europe however still dominated by Japan. At the Olympic Games only Matsumoto can compete which gives more chances for the European fighters.
Boukouvala competed at the 2004 Olympic Games in her country Greece is qualified again and was satisfied with silver.
Her tough match against Sarah Clark was a heavy battle first leading, score was revised twice but in the end she could hold her lead to the Scottish fighter. Clark lost her fight for bronze against Miryam Roper who confirmed her great form in Chelyabinsk. Again a medal for Germany, the third of the first day. Roper defeated firm opponents such as Isabel Fernandez (ESP), Corina Caprioriu the 2010 European Champion, and Hedvig Karakas but lost in the semi final against Sara Loko. “This is my first individual medal at the European Championships. It is a milestone and I have worked for a long time to get there. It is the reward for a lot of work.“ Roper said.

The other bronze medal was decided in an all French bronze final between Automne Pavia and Sara Loko. The winner would make the difference for Olympic Qualification although Pavia is more mature at international level. She won the Tournoi de Paris last year and bronze this year. Here in Chelyabinsk she led from the beginning after Loko couldn’t get passed the long reach of Pavia and was penalized for passivity. Pavia won the match and came back after her loss against Boukouvala in the quarter final.
“It is my first medal, and I am happy with it although I was hoping for more.” Regarding the Olympoc Qualification: “It was between me and Sarah (Loko) and I hope that I’m the one that goes now. The selection for the French team will be announced on 11 May.“

Watch the photos is our photo gallery and subscribe to www.twitter.com/judoeurope for more athlete quotes.