MOUSTOPOULOS TOO HOT TO HANDLE IN WROCLAW 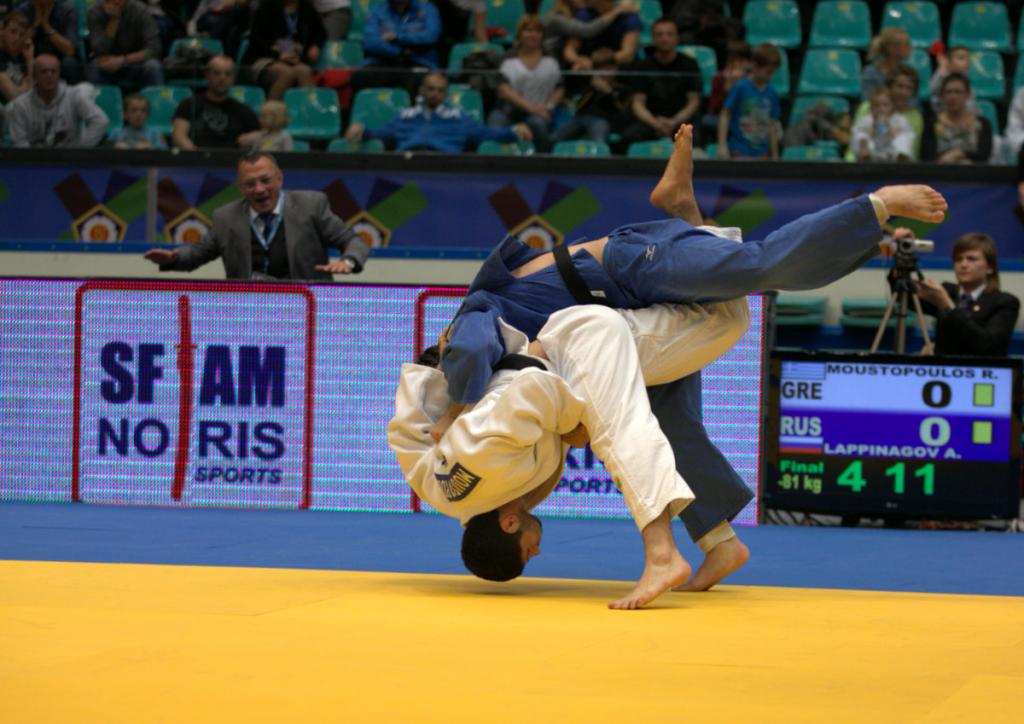 It’s likely that Russian judoka will top the medal table at the Under 23 European Judo Championships here in Wroclaw, Poland. But neither of their two entries in the -81kg category could stop Greek dynamo Roman Moustopoulos from taking the gold medal. In his opening contest, taking only 30 seconds, the unseeded Greek brushed past Poland’s Tomasz Kwiatowski. His second round contest against Bojan Dosen SRB kept him on the mat somewhat longer; but the result was another ippon win. Next up was Dominic Ressel GER who at the quarter-final stage could reasonably have been expected to offer up stiffer resistance. However, Moustopoulos was in no mood for being detained and in a one-sided affair he stormed past the German.

In the semi-final Russia’s number one seeded Khasan Khalmurzaev was unable to stay with the Greek and he too fell for ippon. In the final Moustopoulos faced Aslan Lappinagov whom he threw early in the contest for waza ari before “closing up shop” and holding on to take a well deserved gold medal. “I’ve won gold at junior and now -23 level so my goal next is to win the senior European championships,” said a smiling Moustopoulos. “I cam into the competition with high expectations as I had performed well in senior competitions winning a gold medal in Tashkent and a bronze in Budapest. The final today with Lappinagov was a difficult match as I felt some pressure and I had not fought him previously. But I threw him with my favourite uchi mata for waza ari after which I pretty much just kept him out. I’ll be at the Grand Slam in Tokyo next,” said Moustopoulos. There were gold medal wins too for Emma Barkeling SWE in the -63kg category; Sanne van Dijke NED in the -70kg category and Antonio Esposito in the -73kg category.

For the rest of the today’s results see: http://www.ippon.org/ec_u23_2014.php
See all pictures from the podium today on Instagram (http://instagram.com/europeanjudo) or on Facebook (https://www.facebook.com/europeanjudo).