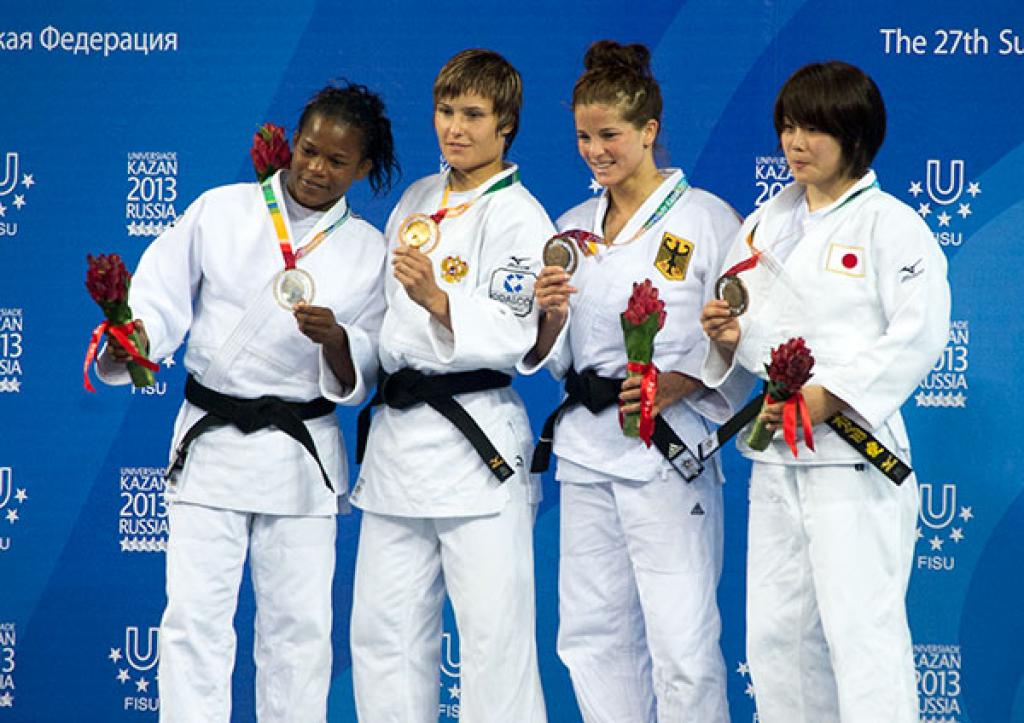 At the second day of the 27th Summer Universiade in Kazan Russia celebrated the gold medal for Natalia Kuzyutina. She was supported by the crowd and the great show when she and her compatriots entered the Tatneft Arena. The judo show was unbelievable and the 103 athletes of the day literally produced a ippon festival.

In the women’s -52kg category the European Champion Kuzyutina didn’t give a chance to the silver Olympic medallist from Cuba, Yanet Bermoy. If the start of the fight was tight, suddenly, Kuzyutina followed Bermoy to the ground and engaged an unstoppable armlock for a quick ippon and a beautiful gold medal in front of her home crowd. Romy Tarangul of Germany won a bronze medal against Darya Skrypnyk (BLR). At the Olympic Games it was Tarangul to defeat Kuzyutina in a heroic fight. For Kuzyutina it’s the first World title of today, on her way to her best ever year.

In the women’s U57kg Olympic Medallist, Ketleyn Quadros claimed Brazils second Universiade title. In the final she defeated Shushana Hevondian after she arm-locked the Ukrainian.

Another silver medal for Europe U73kg where former World Champion Wang Ki-Chun defeated French Jonathan Allardon. He tried everything to score against Wang but the Korean was more precise and more active. Wang finally scored on the edge of the competition area before concluding with an immobilisation for ippon.

In a one-way bronze medal fight, Attila Ungvari could not do anything against Japanese Nishiyama Yuki (JPN). The second bronze medal fight was won by Portuguese Andre Alves (POR), who literally ‘incrusted’ his opponent into the tatami with a powerful counter attack for ippon.

Read more articles on the Universiade