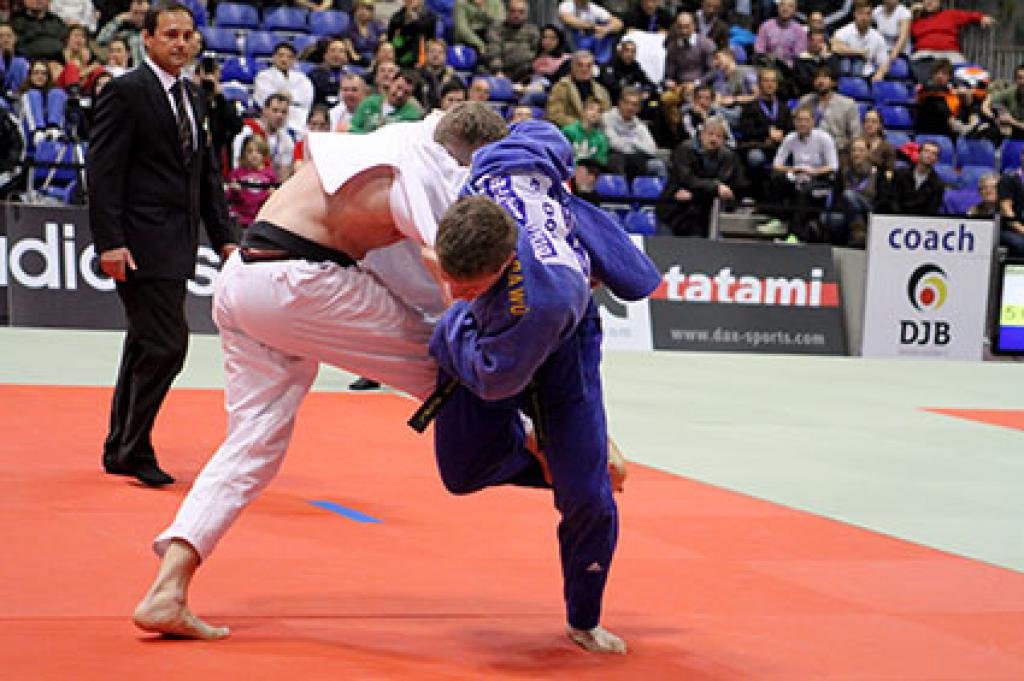 This weekend in Slovenia, Germany and Great Britain national championships took place. For some athletes who participated at the Olympic Games a good opportunity to attend for its own crowd and to warm up again for a long and exhausting season.

In Riega, Franziska Konitz won her seventh national title in the heavyweight category, holding of the talented German heavyweights such as Jasmin Kuelbs who finished second.

In the men’s category U100kg it was Dino Pfeiffer who won the title instead of Dimitri Peters London’s bronze medallist. Hannes Conrad won the title U81kg, the category were London’s runner-up Ole Bischof retired. Many strong judoka still did not compete and gave the preference to be fit for the next European Open’s in Tbilisi and Sofia and the forthcoming Grand Slam of Paris.

In Koper the best athletes of Slovenia fought for the national titles. Some were fighting a category higher such as Rok Draksic who won bronze U73kg. But in the women’s divisions, the battles were exciting with such competition. For instance U57kg Katja Rigelnik defeated Anja Pecnak in the final. The final U63kg was won by Nina Milosevic, the European U23 Champion. She defeated Vlora Bedzeti in her last fight. Tina Trstenjka fought one category higher but was still able to win the title U70kg.

Despite the rough weather also in Great Britain the national championships took place. On Saturday the British juniors showed their skills and the stars from last year’s European Cups for Juniors also claimed the junior titles in Leicester on Saturday. On Sunday the Senior Championships took place and British star Gemma Gibbons won the title in her category.

Gibbons said: “I didn’t feel at my best today, it was my first competition back so I wasn’t at my sharpest.

“It’s good to be back and today was my first senior British Championships win which was very pleasing and was good preparation for returning to the international circuit.”

One of the stories of the day unfolded in the -66kg category as Jidel’s Chris Waddell emerged to take gold ahead of London 2012 Olympian and 2011 European bronze medallist Colin Oates.

Waddell, 20, threw Kumo’s Colin Oates for ippon in the second minute of the contest and continued his rich vein of form in round two as he sealed a surprise gold by defeating Lewis Keeble of RAF/Tamar.

Waddell said: “My target coming in was to take a medal so I’m delighted win gold.

“It was nerve-wracking going up against Colin but this can be the springboard for me now and 2013 can be my year.”

Paralympic silver medallist Sam Ingram, who has aspirations to compete at Glasgow 2014, faced the country’s leading fully sighted judoka in the -90kg category.

The highly-popular reigning Visually Impaired European champion was a man on a mission as he aimed to fulfil a career-long ambition of winning a medal at the British Championships.

Ingram’s fighting spirit was on show as he tenaciously pressed forward against fully sighted judoka to defeat Conor Muphy, Daniel Roberts, Frazer Chamberlain and David Groom to fire himself into the second and final round.

Sam Ingram and Matthew Purssey of JudoScotland/Budokwai set a new chapter in their respective careers and friendship as the pair gripped up.

A waza-ari from Purssey, who was part of Sam’s support team in Beijing when he won Paralympic bronze, was enough to for victory.

Ingram bounced back to defeat Michael Horley, who could only see out of one eye from a  to claim a richly-deserved bronze medal while Matthew Purssey captured his seventh British title at a third different weight.

Sam Ingram said: “I’ve realised one of my career ambitions in winning a British Championships medal, it was a good experience for me and I enjoyed being back competing.“

Purssey echoed the humble words of his teammate and said: “I’m pleased with the win, I’ve done a lot of work with Darcel Yandzi in the build-up and was tapering after the Kendal Winter Camp.

“A lot of stuff I’ve been working on come off for me and it was a lot of fun to go up against Sam and I thought it was a good match.

“For him to come away with bronze today is a fantastic achievement and it’s a testament to him, Judo Scotland and the British Judo Visually Impaired programme.”

The -100kg category was a tale of exciting judoka with potential as great as their frame going toe-to-toe. 2013 Junior Champion Philip Awiti-Alcaraz, 19, of Enfield led the way as he caught Team Bath/Pinewood judoka Ben Fletcher, 20, with a beautiful uchi-mata to seal a unique double.

The oldest medallist in the category was Theo-Spalding McIntosh at the age of 23 with Ernest Bevin’s Jack Kelly, 20, capturing the second bronze medal. The future looks very bright in the -100kg category with London 2012 James Austin, who has just undergone shoulder surgey, set to return in time for the British Open.

The youngest winner of the day was SKK Judo Club’s highly-talented Jodie Myers, 17, who impressively followed up on her 2013 Junior Championship victory by beating vastly more experienced judoka.

One of the most intriguing categories of the day was the talent-laden -57kg field where two-time Olympian and 2011 European bronze medallist Sophie Cox was challenged all the way by some fast-rising and established judoka.

Junior Player of the Year and 2013 Junior champion Nekoda Davis, 19 of Ealing Judo Club was a firm favourite with the crowd and underlined her credentials as she edged Sophie Cox, 31, by hantei (flags) after a pulsating contest.

Bacup’s Cox bounced back to take the title with victories over eventual silver medallist Connie Ramsey and Nicola Haywood who took bronze alongside Nekoda Davis.

Four-time European medallist Cox said: “I came here today because I wanted to test myself and I certainly got that.

“Every fight was a good test, I was happy with how I fought and while my performances keep up I’ll keep competing and I’m targeting the big competitions this year.”