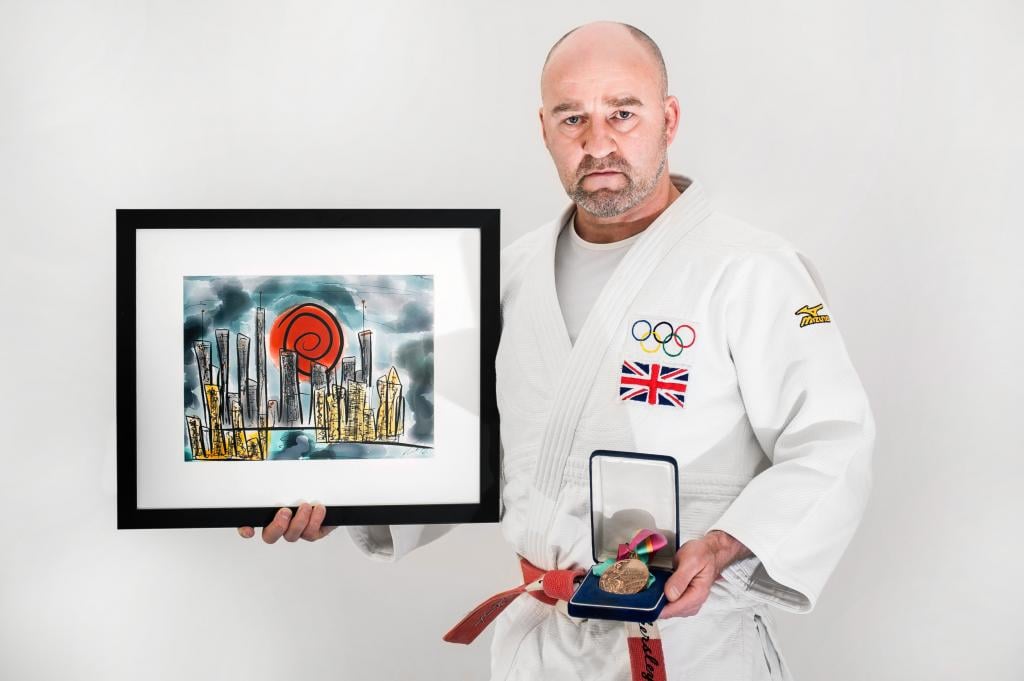 So, there is a life after all…The scary ‘black whole’, which some more, some less productively, but eventually fills out. No doubt, double Olympian (1984, 1988) and Olympic bronze medalist (Los Angeles 1984), 7th Dan British judo legend, Neil Eckersley, has successfully transferred from international tournaments to worldwide galleries. Eckerley’s art exhibition is currently taking place at the Studio 110 in Paris and will be open during the famed Paris Grand Slam tournament which will be held next weekend.

The theme of the exhibition will abstract Bold and Bright which as Eckersley explained was an inspiration from his environment where lives. “I live in Norway and I am influenced by the environment. I leave near the sea, fjords, mountains and the vastness of the skies here and it is totally awesome.”

When one door closes another one opens. Similar condition occurred to Eckersley about 20 years ago when he first get involved with the beauty of art. “Due to having dyslexia I was drawn to art and sport during my school years. Also having a tragedy within the family I was advised to use art as a way of dealing with this situation. I was inspired by the landscape of Manchester (United Kingdom) and the inspiration of artists such as Pablo Picasso and Jackson Pollock.”

Eckersley began to specialize in this field with several previously completed exhibitions at different locations such as The Storey Gallery (Lancaster, Manchester – UK), L.A. Pederson (Brynne, Norway) and Kristianhuset (Kleppe, Norway) “I have sold work to clients in Europe and the U.S.A. I am starting to get a reputation in the art world for being a unique and inspiring individual”, – he explained. Double European bronze medalist, Eckersley, knows exactly how prestigious is the Paris Grand Slam tournament and it is no co-incidence he has chosen to held the exhibition during the period of time which overlays the tournament. “I chose the specific dates as I knew it was a great build up to the Paris Judo event. My audience would be fellow artists and sports people from past and present. It is an absolute honor and privilege. I used to fight in this competition and have many memories of both living and training in Paris whilst preparing for major events. I have always been received by the French Judo audience so to be able to event in their backyard is very exciting.”

What brought the former elite judoka to Paris this time around? NE: “I was approached by the owner of the gallery as he was looking for new and up and coming artists. The gallery was opened about two months ago. I also like to support gallery owners and promote art to everyone. I have always wanted to exhibit in the Mont Matre area as it is one of the most famous cultural centers in the world. Since visiting this area several years ago it has been a goal for me to revisit and have my own exhibition there.”

The values of judo cannot ever be stretched enough. Values which than turned into life skills allowing individuals to progress perhaps further than they ever imagine, even within fields which carries the unknown. Which of those values or skills Eckersley was able to carry onto his artistic life? “The use of creativity. I am a very open and creative coach and I believe that these skills can be transferred to my art work. I value the energy of life and very much live in the creative process.”

The exhibition is open everyday from 12:00 until late in the evening and it is taking place at Studio 110. The exhibition will run until the end of October. Address: 110 rue Caulaincourt – 75018 Paris