Netherlands and Germany share medals at European Open in Lisbon 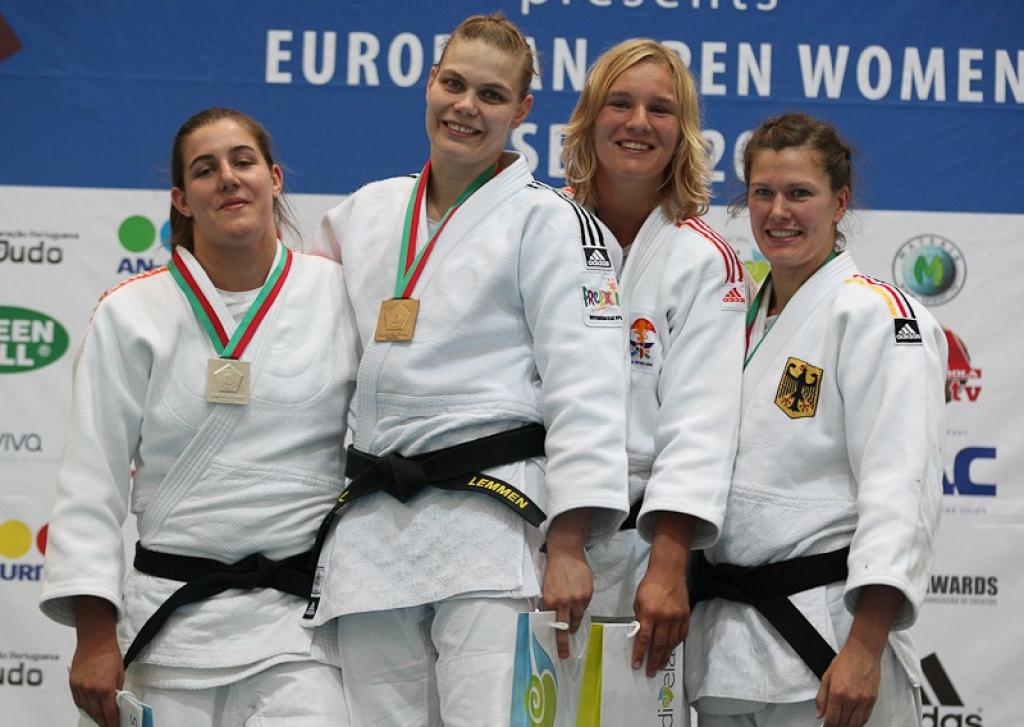 At the second day of the European Open for women in Lisbon Today it was a Dutch-German day. Both nations shared the gold medals, both two gold medals. The Netherlands won the medal table with three gold medals including Saturday’s first place U52kg. At day two U63kg and U78kg was the target and for Germany U70 and +78kg.

In the U63kg category Dutch Anicka van Emden qualified for the final where she fought against Italian Valentina Giorgis. The 21-year old Italian studied her tactics well but the Dutch managed to counter the Italian and scored Wazari with less than two minutes to go. Giorgis could not do anything until the end, finishing with a silver medal. Van Emden had defeated Faith Pitman in the semi final. Faith Pitman ended with the bronze medal after the victory over Polish Halima Mohamed-Seghir after a a Makikomi with crossing grip, which ended by making an armlock, Hansoku Make for the Polish talent.

German Claudia Ahrens entered the bronze medal fight, against the Spanish Isabel Puche Palao, in high speed. In 15 seconds Ahrens scored a yuko with a Sumi Gaeshi, and scored three more times, twice Wazari, this time a satisfying comeback after her back injury.

Both bronze medals went to Spain, Maria Bernabeu Avomo and Maria Del Mar Paredes won their fights, Bernabeu Avomo just with an positive attitude forced the Belgian Roxane Taeymans to her fourth shido. While Paredes made use of her long legs to throw against the Hungarian Franciska Szabo, by Wazari with an Ashi-Guruma. It was not Szabo’s day, for Spain the sun was shining with two bronze medals.

Two ducth rivals Iris Lemmen and Guusje Steenhuis were the finalists of the U78kg, and may be because they both know each other, the final ended with Guusje Steenhuis getting her 4th shido and no scores.  A bit disappointing for the European Junior Champion of 2011 and Dutch Champion Steenhuis who was penalised while Lemmen was able to make her own game and proceed her tactics against the left handed Steenhuis. Lemmen though could be satisfied after an efficient day in Lisbon with good tactical and powerful judo and her second consecutive victory after taking the gold at London’s European Cup as well.

Dutch junior Karen Stevenson recovered herself after losing the semi final to Iris Lemmen. She won the bronze medal against Spanish Laia Talarn Compano after a good start from which the Spaniard couldn’t recover. In the other bronze medal fight the British Caroline Kinnane tried to counter an uchimata from the German Annika Heise, but the German switched to an O-uchi-gari and scored Ippon.

Where the Dutch ruled under 78kg the Germans dominated plus 78kg. Franziska Konitz, Jasmin Kuelbs and Carolin Weiss, won the three colours. Konitz started by scoring yuko early in the final and ended with a great ne-waza work to Osaekomi: ippon. Konitz was by far the best with her athletic style of judo and had no difficulties with any of her opponents.

In the bronze medal fight the Dutch Tessie Savelkouls should have received more but was penalised one time with a shido and tried all what was possible to convince the referee that she should be the winner against Carolin Weiss. The German started well this tournament and could also defend the attacks of the Dutch and was the final winner of bronze after Weiss countered the Dutch and scored the decisive wazari.

The other bronze medals went to Russia, with both Ekaterina Sheremetova and Daria Karpova fighting for it. Ekaterina Sheremetova won the bronze, first scored yuko with the most used technique of the competition, an o-uchi-gari, and later after scoring again yuko when she grabbed Karpova on the floor to score ippon.

A great day for the Netherlands and Germany. Germany claimed a total of 7 medals, but the Netherlands won the medal race due to the gold medal and silver medal of the first day, in the U52kg and U57kg category.

Watch all photos of the European Open in our Media Gallery.