NEW RULES: WE HAVE TO DO THE NEXT STEP 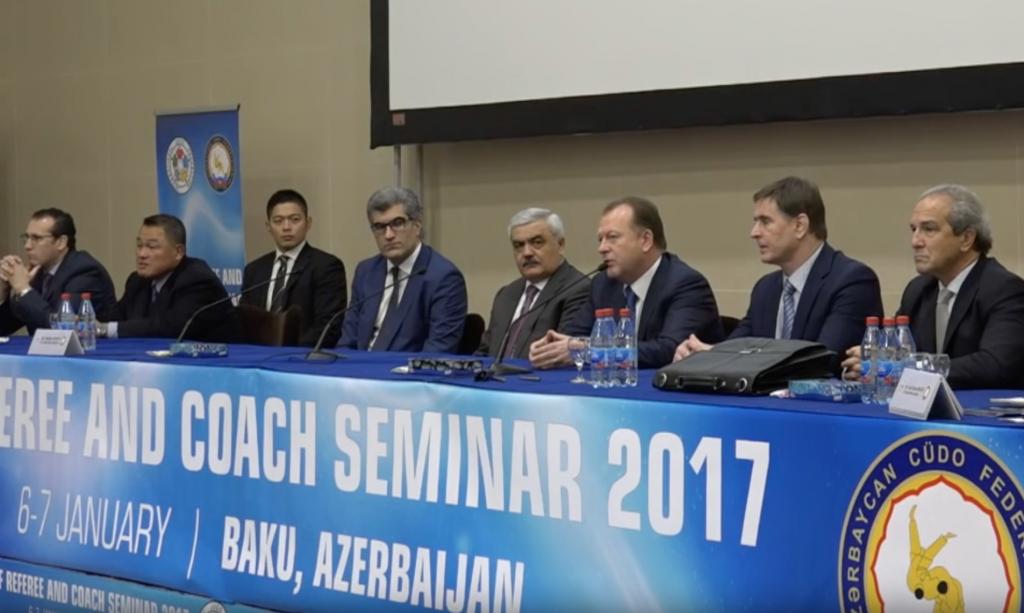 That the International Judo Federation will test new rules is already known. End of December the IJF informed the public about the changes in a short article on their website. The goal: To make Judo more attractive and more dynamic.

In the last three days the IJF invited coaches and referees to Baku to explain the forthcoming changes in detail. In three long seminars the IJF Refereeing and Sport Commission answered cleary all the questions of the participants and demonstrated on the tatami as well.

After the welcome words of the President of the Azerbaijan Judo Federation, Rovnag Abdullayev, the IJF President Marius Vizer explained the seminar participants the reasons behind the changes:

“We are now in a moment were people from the media, the sponsors and people who are involved in judo promotion they are expecting from us to come to the next step. In the next four years we will deliver the jump to the quality of all our projects initiated in 2009.”

The changes which we plan to do are major changes, because we have to open judo more and more for the public and not only for our community. We have to be an open sport for the world, understandable, much easier and more flexible in our approach and always to change and to correct those things which are not according to our spirit, culture and tradition of judo.”

The second part of the seminar took place on the tatami. IJF Sport Director Daniel Lascau and Judo Expert Neil Adams have shown the different changes and special situations on the mat. They also discussed that with the coaches to avoid any misunderstandings.

One main topic was the grip below the belt. In the past it was penalized immediately with Hansokumake. Now the referees will give a shido first. Yamashita Yasuhiro, four times World Champion and Development Director of the IJF said:

“We have discussed a lot about the grip below the belt because before we have seen many cases where athletes accidentally touched the leg without any intention.

We have seen many Hansokumakes and it was such a shame to see athletes are beeing disappointed with these accidents or missconduct of the rules. That is why the members of the IJF discussed to change the rule of penalizing.”

“If you have a normal [classic] grip you are in a comfortable situation, because you have time. If you have an unorthodox grip then you have to attack immediately. The only change now is to give a little bit more time than you had in the past for unorthodox grip [e.g. one side, pistol grip, …].

The reform of the Kumikata should give the athletes more possibilities. The main goal is to see more techniques and more scores. The use of unorthodox grips must be in a positive way. The referee has to see progression and an attack in the end. Negativ judo will still be penalized as it was in the past.

Another important point on the agenda was the safety. Any bridge attempt will be penalized with Hansokumake. Juan Carlos Barcos explained the reasons:

“We don’t have to think only of our top athletes. We must think of the education of the children and education of judo. Children realise that some of the players try to defend the landing with the head and they are trying to imitate. This is the main reason why we want to avoid these high risk movements.”

Neil Adams reminded the coaches and referees that all of this rule changes are going to be tested until the World Championships in Budapest.

“We have now an eight month test period. The rules can be changed! In these time we have to analyse the effects of the changes. If we find out that these rule changes are not good and the response is negative then we have to chancel these rules. We have to find a set of rules for the next Olympic qualification period who gives everbody a fair chance.”

Evaluation of the points