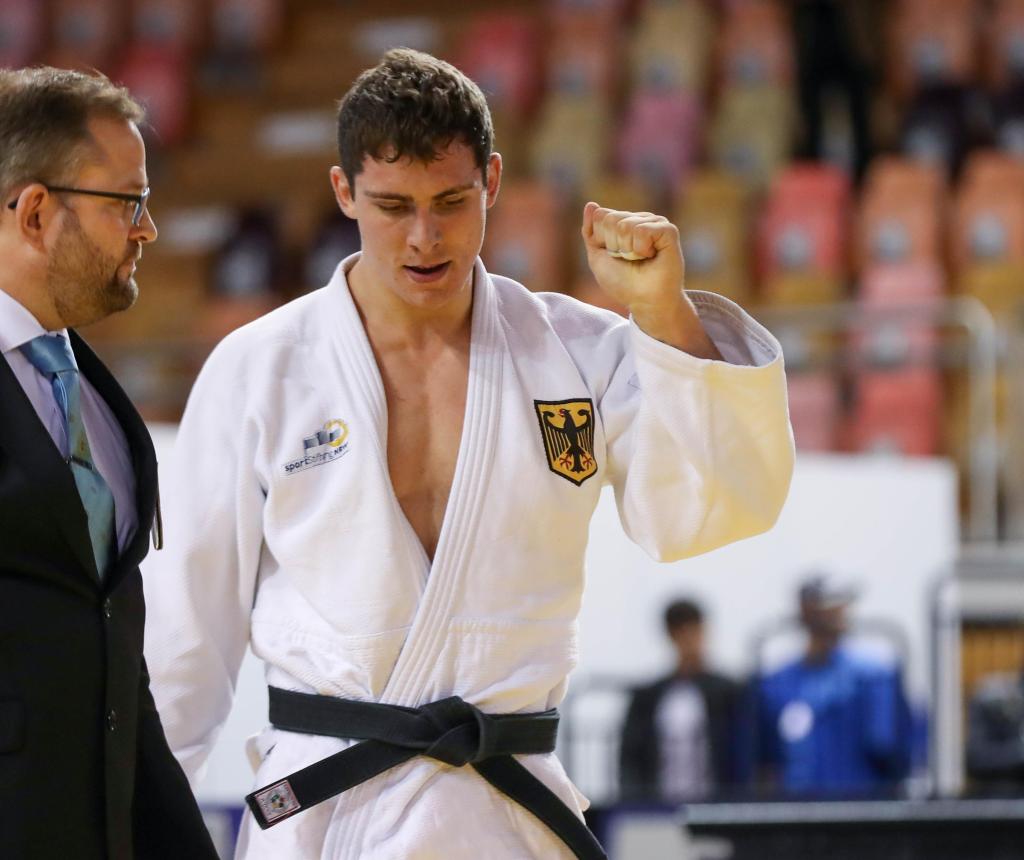 The National Sports and Culture Centre d’Coque was filled with 600 judo fans during the second day of the 2019 Luxembourg European Judo Open. Also a lot of German judo fans witnessed an unbelievable performance today which was delivered by Falk PETERSILKA in the -90kg category. The German judoka won all four of his contests by ippon and his performance impressed the audience with his throwing abilities.

The key fight for the 22-year-old athlete was the semi final against the Junior European Champion 2017, Aurelien Diesse. The French athlete was the top seed within this weight class. It was a tight contest with no score at the regular time. The contest went into golden score where after 1:30 seconds Petersilka launched a powerful left o soto gari – ko soto gake combination that brought Diesse crashing to his back for ippon.

This fight was very difficult. I fought him only at training camps but I knew that he is physically strong and an excellent judoka. It was a very close and hard fight but I managed to win.

In the final he faced another French men, Hugo GRANDHAIE. Petersilka, who trains in the training center in Cologne countered the French twice with uchi mata gaeshi, twice for waza ari.

For the final match I was very well prepared. From the beginning I felt that he had problems with my fighting style. I had a lot of self confidence to win this match.

The student of medicine won already cup medals in Orenburg and Celje but this is the first gold medal at European Open and also the first and only gold medal for the German team on this weekend.

This medal is very important for me. It is my first senior year and the medal is an important step. I already fought some Grand Prix’s but I never managed to win a medal. In Germany we also have some very good fighters in my weight class so this medal helps a lot to consolidate my position as the #2 behind Eduard Trippel.

The first year at senior level is very difficult. When i was a Junior I was one of the strongest athletes in my weight class. Now I am only mediocrity. Senior athletes do not excuse any mistakes. When you fight at a Grand Prix or Grand Slam, one little mistake will be punished immediately. So that’s why I have to train much harder to avoid this kind of mistakes.

The next challenge for him will be the Grand Slam in Brazil and the U23 European Judo Championships in Izhevsk middle of November.

After a very competitive weekend, France still managed to conquer the medal table by 10 golden performances, whilst Germany and Hungary, Azerbaijan and Belgium all earned a gold medal each.