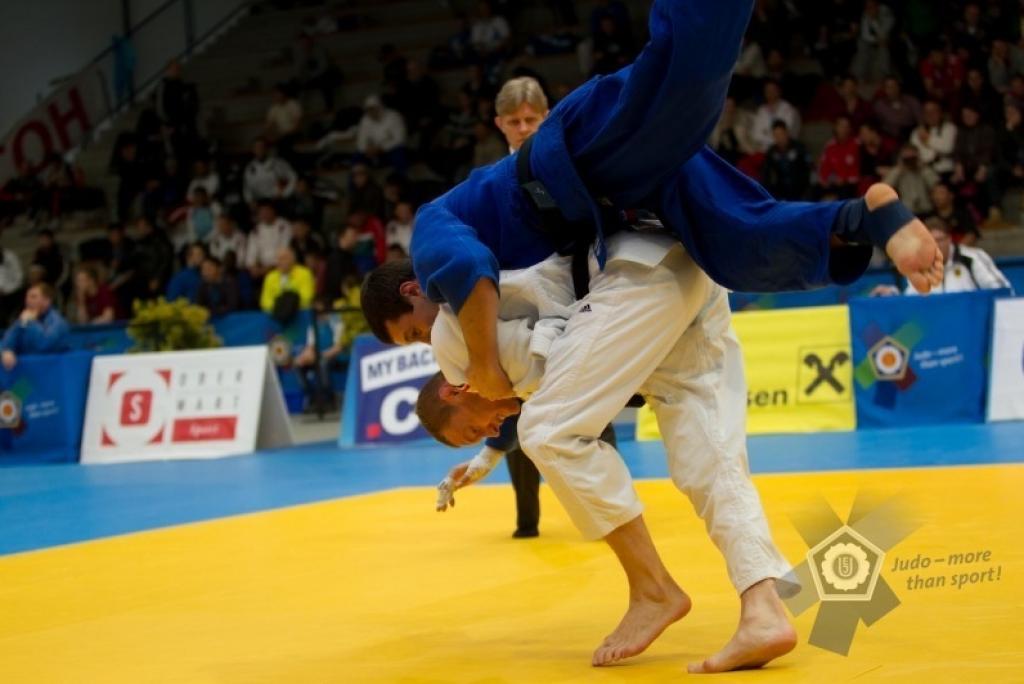 Despite a strong competition, the European judoka collected five out of seven gold medals at the men’s World Cup in Oberwart, Austria. Today the final block started well with a victory for Levan Tsiklauri of Georgia U81kg. He won his first ever World Cup outside Georgia. He had lost three World Cup finals previously but today he could stand the pressure of Antoine Valois-Fortier, who also had a good day. The Canadian youngster already won six World Cup medals and is one of the outperforming Canadians, certainly in this category. Although he wasn’t happy with his second consecutive lost final (Apia last year) he could win five battles. Tsiklauri is experienced and won all six.
Loic Pietri (FRA) and Konstantin Ovchinnikov (LAT) collected bronze. Latvia is really booking progress in the men’s category.

Dmitri Gerasimenko won his second World Cup ever U90kg. The Serbian is the first men to win a World Cup anyway, so good progress for Serbia. Mara Kovacevic was a successful women’s heavyweight for Serbia in the past.
Gerasimenko was able to beat the strong valentine Grekov, a previous triple European Champion who added his 20th career medal at a World Cup. Only his fourth loss in a championship.
Christophe Lambert (GER) was again successful at a World Cup. Last year he won in Liverpool in this traditionally difficult weight category for Germany.

His compatriot Dimitri Peters is in a real good shape taking his second consecutive win. He won the World Cup in Tbilisi and today he defeated five opponents. Grigori Minaskin (EST) won his first World Cup medal. The 21-year old is an interesting challenger for Estonia that doesn’t have a big pool of fighters anymore and is seeking for talent. Today’s biggest talent was in the body of Peters who never won a big event, but slowly is getting closer to the top of the world in this class U100kg.
Elco van der Geest of Belgium won bronze at the age of 32, he is still preparing for a last trick. In 2004 he was close to an Olympic medal and was European Champion in 2010.

Oscar Brayson was the only to stand the Georgian heavyweights. The world class Cuban won his second World Cup ever, where one would expect more. He usually peaks at the major tournaments and he showed he is getting at world class level again. In 2009 he was the vice World Champ.
He defeated the 2010 World Champion Daiki Kamikawa today in the semi final and Adam Okruashvili in the final. The Georgian lost the World Cup final in Tbilisi two weeks ago against Zviadi Khanjaliashvili (GEO) who won bronze today. The Georgian judoteam is led by their Austrian coach Peter Seisenbacher, the Olympic gold medallist in 1984 and 1988. Job well done this weekend.

Review all results and pictures from Oberwart here: