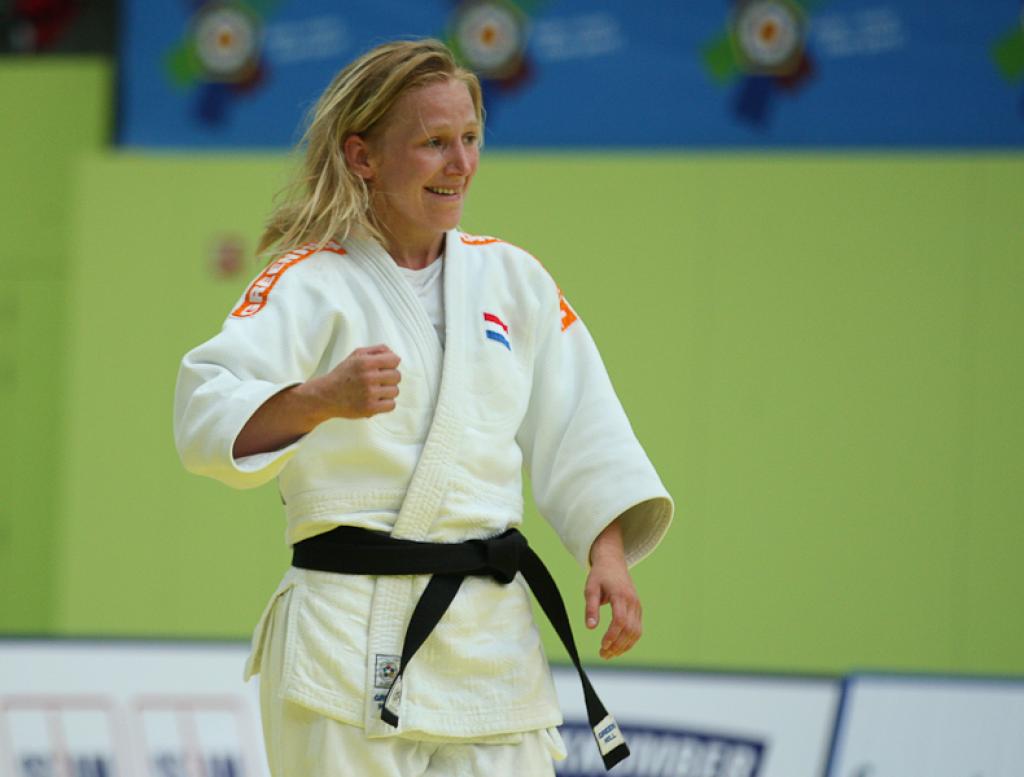 The Netherlands is leading the medal table after the first day of the European Open for women in Lisbon. Miranda Wolfslag claimed the gold for the Netherlands in the category U52kg. A surprising victory for Wolfslag, who is the leader in the European Cup Ranking, but never celebrated a gold medal before at this European Open level. Last year she tasted the podium in the World Cup of Rome, but on Saturday she defeated all four opponents. The first match against Austrian talent Dengg resulted in ippon, Maria Ertl (GER) was defeated by yuko and in the sem final the Dutch overcame Andreea Ionas, nee Catuna who won the bronze medal. In the final Roni Schwartz was the last victim by a waza-ari. Schwartz started U52kg this season which seems to work out well. The 28-year old Israelian defeated another Israelian Hayat in the semi final after good groundwork. Hayat won the bronze afterall. A big smile for the Dutch who now gained some points for the World Ranking which may give her better ranking positions for future international events. Another touch of sweet after Wolfslag was also among the golden Dutch team at the European Team Championships in Budapest and last week’s gold medal at the national team championships. After three victories previously at the European Cup, this seems to be the next level step.

Holland celebrated a second medal, with a touch of gold when Carla Grol lost her final U57kg. In this strong category it was Slovenian Vlora Bedzeti who claimed the gold after a perfect day of judo. The Slovenian stepped back from 63 to 57kg to avoid the big competition in the follow up of Olympic Champion Urska Zolnir U63kg. Zolnir is now a coach… but has not retired herself as judoka and gives the right spirit for the Slovenian women. Bedzeti is one of the talented choices in her nation with Vesna Dukic, Katja Rigelnik as candidates in the same category, what a luxury.

Today was a well deserved victory with offensive and typical Slovenian judo and with her long reach she was hard to catch for the others. Grol though seemed to have found the grip halfway the match but gave the chances away when Bedeti scored wazari with another O-Uchi-Gari. Bedeti was unstoppable today in her actions, crossing grips and o-uchi-gari all day long. Bedeti won five matches and her second fight against Telma Monteiro seemed to be the toughest fight of the day.

Both Monteiro as Olympic runner-up Corina Caprioriu were the expected finallists, but in this field apparently anything could happen. The 30 eager women were able to eliminate the favourites. All credits for the finallists and to the bronze medallists Nekoda Davis (GBR) and Agata Perenc (POL). The last defeated Caprioriu in her second fight. Although she lost against Grol she was able to defeat Israelian Mina Zyman Minagawa and Pan Am Champion Stefany Tremblay.

The victory U48kg was for former Brazilian athlete Taciana Lima who fights since this year for Guinee-Bissau, a nation with 355,000 inhabitants and one of them is a successful judoka and now African Champion. However well deserved with good offensive judo Lima defeated all her four opponents in an attractive way. Lima needed less than 30 seconds to get to the semi-final and only ten seconds to the final. Last opponent was Russian Kristina Rumyantseva who walked against a waza-ari early in the final and couldn’t recover despite the close and controlled judo from Rumyantseva.

Watch the action in pictures in our media gallery here