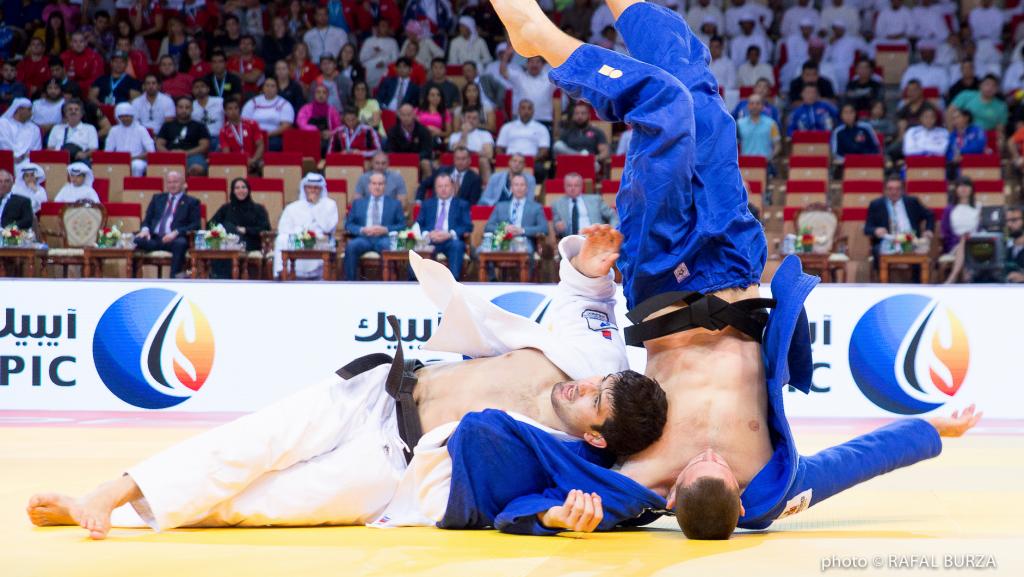 Of the six current Olympic champions competing at the Grand Slam in Abu Dhabi only Tagir KHAIBULAEV (RUS) was able to come away with a gold medal. The Samara native did so in convincing style defeating in the process two former world champions to finish in top spot in a strong -100kg category. Khaibulaev is a warm and engaging individual with mild manners whose first instinct when preparing for an interview in English is to say that he does not speak the language. He then answers perfectly happily all questions put to him with genuine respect when referring to his opponents and without any sign of beating his own chest.

Khaibulaev began his day with a frustrating first round win against Frederik JOERGENSEN (DEN), whose lacklustre effort resulted in his racking up shido after shido to eventually be given hansokumake. Next up was Sergio GARCIA (MEX) whom within the first minute Khaibulaev turned over effortlessly in newaza to hold with kuzure yoko shiogatame for ippon. In the third round Khaibulaev defeated Maxim RAKOV (KAZ), the Kazakh fighter collecting three shidos whilst Khaibulaev had only two.. In the quarter final Khaibulaev’s opponent was Karl-Richard FREY to whom the Russian had lost at the world championships in Chelyabinsk last year before going on to take bronze. This time around it was Khaibulaev who took the spoils, winning in ne waza after a neatly executed turn over into first tate shiogatame for waza ari and then, after a brief toketa, kuzure yoko shiogatame for waza ari awazete ippon. In the semi final Khaibulaev faced Domenico DI GUIDA (ITA) and once again the Russian’s newaza was to the fore, defeating the Italian with kuzure kesagatame by ippon. In the final Khaibulaev defeated Lukas KRPALEK (CZE), throwing the Czech fighter for yuko with ippon seoi nage.

When asked about the what fight had given him the most satisfaction Khaibulaev said, “It was good to defeat Frey today, as he is an exceptionally strong fighter. It means that I’m 2-1 in our head-to-head. I’d beaten him in the final of the Ulaanbaatar Grand Prix last year, then lost to him at the world championships in Chelyabinsk.” Khaibulaev then added, “But I suppose the fight with Maxim Rakov was the most difficult today, as we know each other very well and I’m happy to have a winning record against such a difficult opponent.” Khaibulaev was particularly pleased to have a couple of fights in ne waza. “I like to throw my opponents and I’m always looking for attacking situations standing up. But it was nice to win some fights in ne waza today,” said Khaibulaev.

With regard to his upcoming competition schedule Khaibulaev said with a smile “You know it is our chief Ezio [Gamba] who says where we will compete although I expect to compete on the Asia leg of the Tour, perhaps in Jeju and Tokyo.”