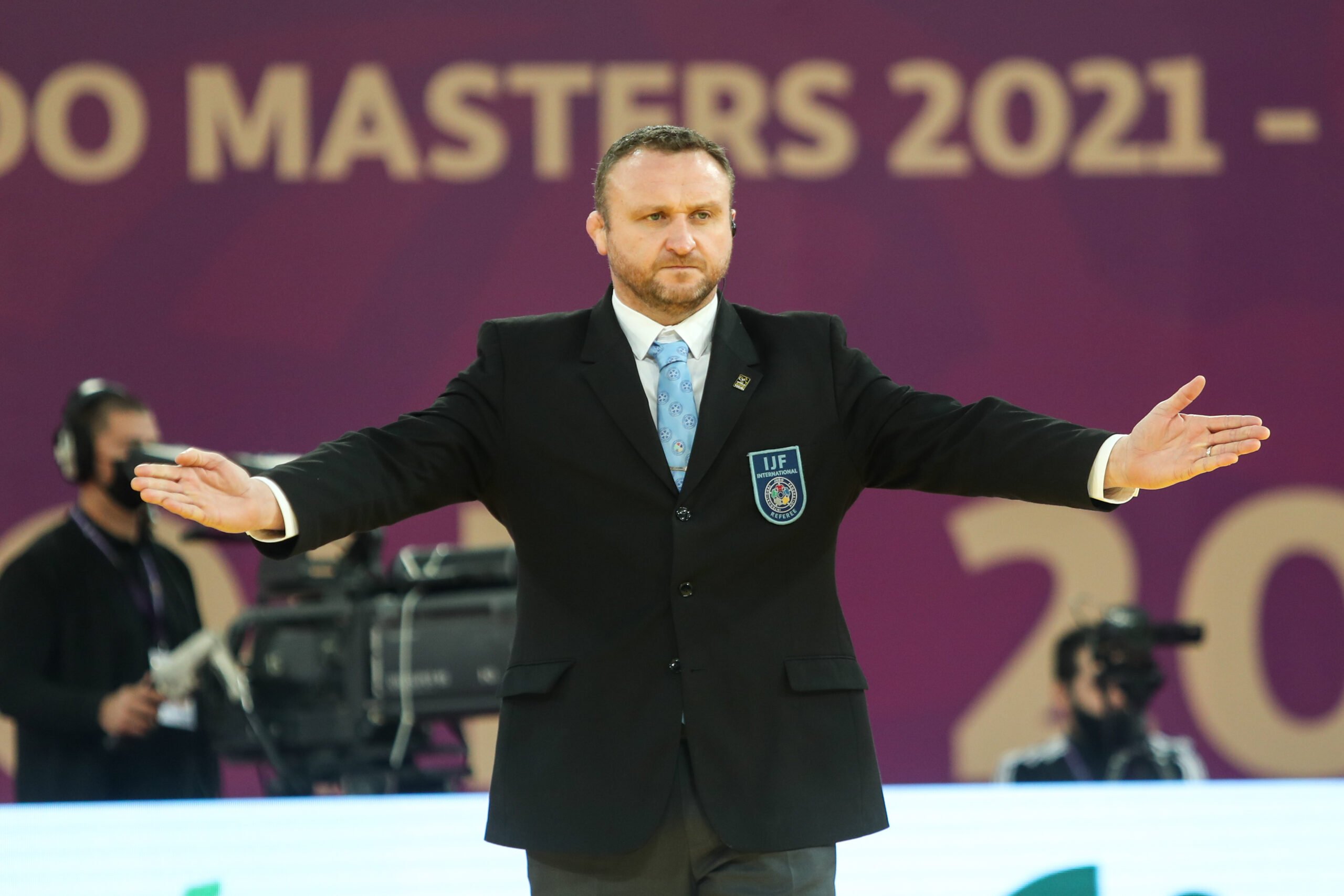 Up next in our incredible lineup of Olympic referees is Matthieu Bataille.

Starting judo at 6 years old in the kids club, AS Étaples in the north of France, Matthieu could never have anticipated that he would one day be a three-time world medallist, let alone have furthered his career to be a referee in the Olympic Games.

It began following retirement when the French federation set up an exam for former continental and world medallists to become referees.

I tried arbitration initially out of curiosity. I wanted to give it a try and see how it feels when you’re in the middle of the mat, an initial experience to discover the work performed by the referees and finally I liked it. Being an athlete was one thing, refereeing another, but in the end the same shared passion for judo.

As a former athlete he is all too aware of how decisions affect athletes,

The first difficulty encountered was to find the right body positioning and learn the gestures. I know how a judoka feels, who thinks he is hurt by the arbitration decision, which is why I strive to be the fairest in my decisions. I know judo, I know the rules and I also know the feelings you have before, during and after a fight. When you are an athlete sometimes you do not see things as they are and it can be frustrating at times to accept the decision.

I analyse behaviour a lot during fights, it allows me to make good judgment, I know the stakes but I believe in being the fairest. I pay attention to all the details during the fights. It’s true that I have to admit that I didn’t have much negative feedback on the way I officiate.  So maybe yes, having been an athlete myself helps to get the decision accepted.

Though there isn’t a specific contest he has a particular fond memory for, Matthieu has found enjoyment in all,

I like to referee all categories, each fight is different, refereeing the championship finals is very exciting because the stakes are high and the pressure is strong for the athletes but also for the referee, I know that the finals attract a lot of spectators. It reminds me a bit of when I was in their place, thinking “no mistake”!

When asking what the main differences are between his competitive and refereeing careers, it was a simple fact.

Apart from the dress, I do not see any difference between an athlete and a referee.  We are all there for the same passion, the same love of judo. Obviously the stakes are different, it’s not the same career, but maybe the same goals, to do the big competitions, and to be selected to participate in the Olympic / Paralympic games and to be the best in his class.

Some athletes choose to go in to coaching, or in to a non-related career but still in search of that feeling. Matthieu has found it in refereeing. Not only on the tatami but the whole experience in the judo community is something special, the relationships you build alongside a career you love.

I’m looking for a little adrenaline, I find similarities with my old career, the stake, the pressure (the right one), the contact with all the judokas, the movements, the trips and the time differences, the nice exchanges with the coaches, the world of judo is a family. I want to be a good referee, I want to be a straight referee, once again I know how the judokas who are on the tatami feel every moment, victory or defeat. But the error is human, the field of vision at the moment of impact is not always the best and that is why as an athlete or a referee you have to accept the decision or the change of decision. It is a sport rich in values, we all convey an image when we wear a kimono or a judo referee costume, being in the top 10 is a form of recognition, of pride.