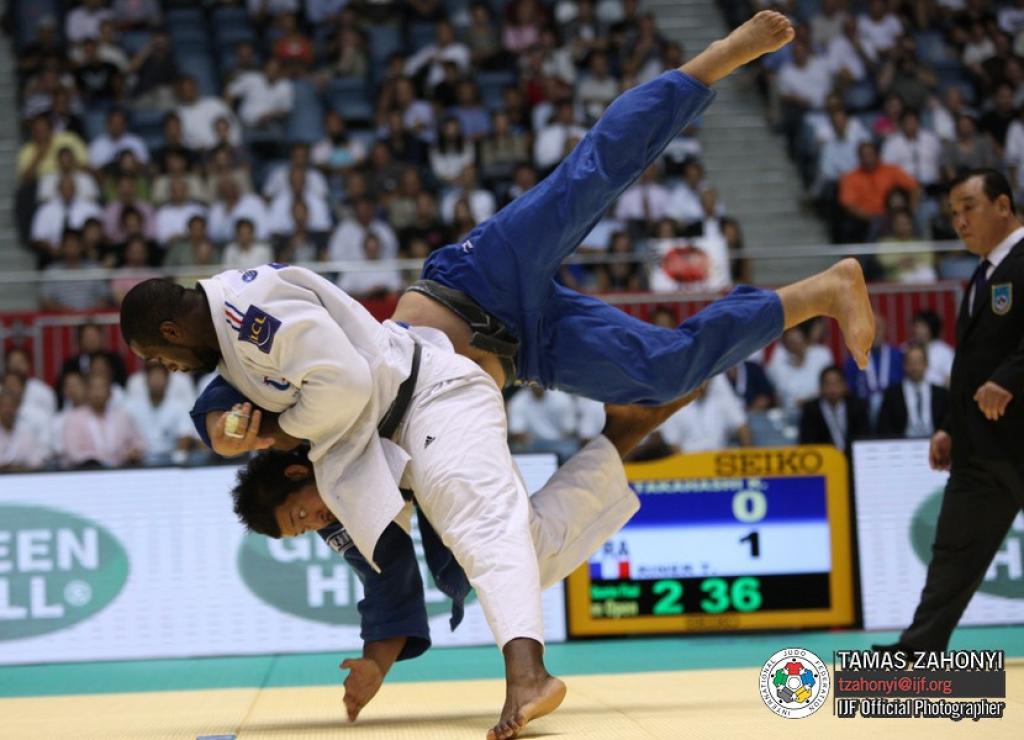 Who would have thought that Teddy Riner would lose the Open title to a 20 year old youngster from Japan? At least not Riner himself who was completely broken after Daiki Kamikawa was awarded 2 white flags, against one blue flag for Riner by decision.
What a sensation in the hall after Japan won its tenth gold medal, an absolute record. In total Japan collected 23 medals!
Not Teddy Riner won the ‘double’ but Mika Sugimoto, who added another gold medal today in the repetition of Thursday’s final in the +78kg division.

Sugimoto defeated Qin Qian of China who again picked up the silver in the open class that is usually dominated by China. Last year it was Tong Wen who won the double. This honour was not for 26-year old Sugimoto who wasn’t expected to win the double. Although she won the All Japan title in April, it was more likely that Maki Tsukada or Megumi Tachimoto would win the medals for Japan. Tsukada has more experience and a reputation at the major events in the world, but Japan apparently has a choice.

This was also applicable in the men’s category where four Japanese were able to reach the last eight. Kazuhiko Takahashi finished 7th, Hiroki Tachiyama third as well as Keiji Suzuki who was steaming today, but made a mistake in his semi final against Kamikawa. The 30-year old Suzuki defeated 10 year younger Kamikawa at the All Japan Championships final this year, but this Kamikawa kept cool and benefit of the weak moment of former World Open Champion and Olympic Champion Suzuki.
It was Kamikawa who entered the final against the undisputed favourite Teddy Riner who was convinced to win the double and fifth World title. But that is exactly the beauty of judo. And it’s not so bad that Riner is human again. It was Kamikawa who kept cool and could deal with the immense pressure that Riner can generate with his length of 2.02. But Riner didn’t take all risk with his powerful Harai-Goshi but tried to outbalance Kamikawa three times with a sutemi.
But once more Kamikawa kept his head cool and was even able to generate some chances in the golden score, without a score, but he was really close and got more dangerous towards the end of the match, which may have caused the two white flags at hantei. Not unanimous, but well deserved. No one could stand the pressure of Riner so good today as Kamikawa who defeated 5 World titles and one Olympic title in his last two matches, impressive!
Riner however deserves all compliments this championship, what a pressure he has to deal with. All comparisons to David Douillet who was able to win three world titles, Riner already counts four. But what happens in Japan, stays in Japan: 23 medals (one more than Europe in total), 10 of them gold.

France ended second in the medal tally, with gold for Decosse and Riner. Korea (Kim), Greece (Iliadis), United States (Harrison) and Uzbekistan (Sobirov) are the new benchmark in their categories. It is definitely an unexpected medal tally in all ways: such dominance by Japan, the first ever gold for Uzbekistan and Greece, 22 countries winning medals, and countries that were expected to win gold but didn’t meet the expectations.
The next World Championships will be held in Paris, an interesting challenge for France to improve its performances and something to look forward to for Teddy Riner and the current World Champions. Staying there is even tougher than getting there.