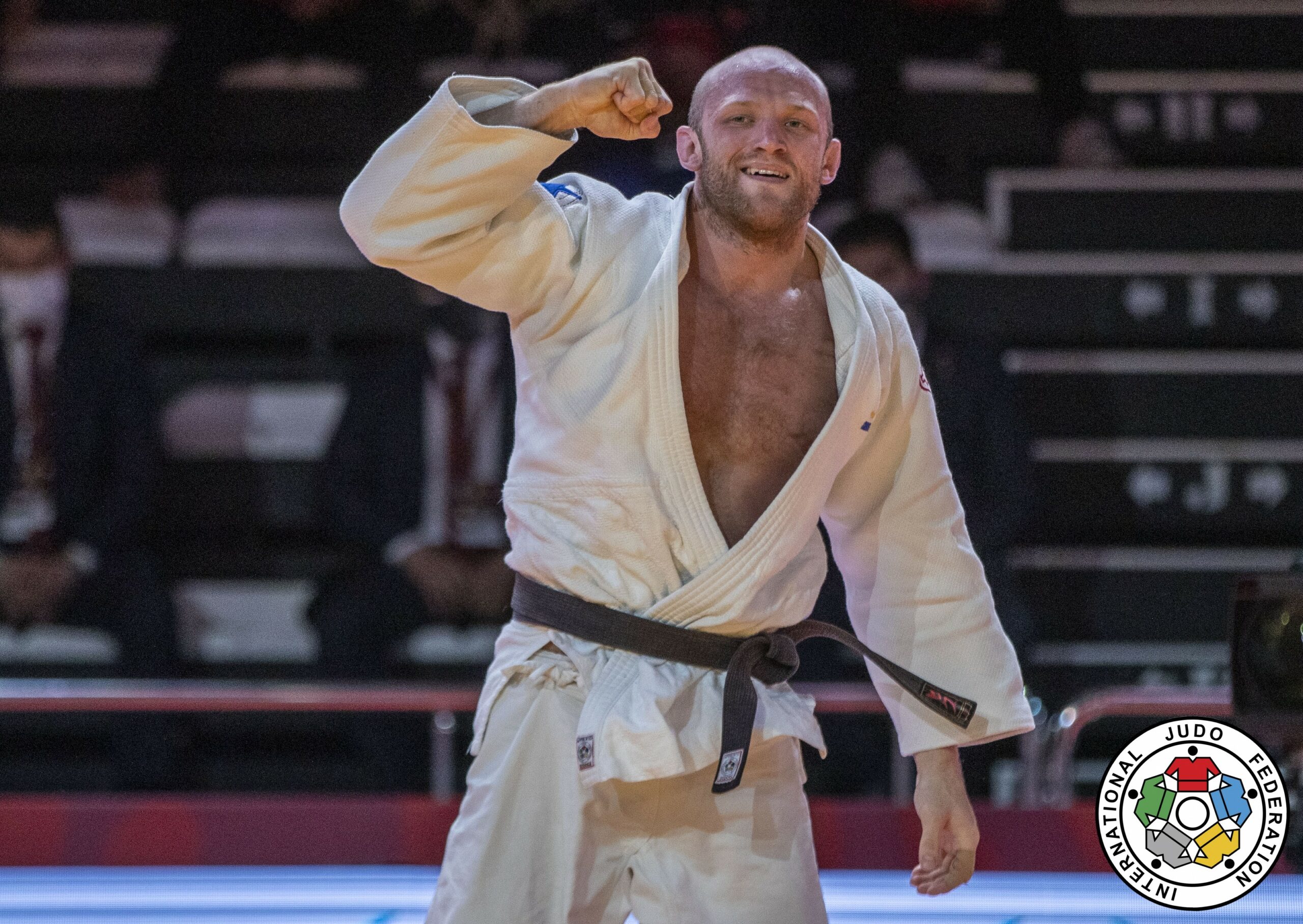 In what must rank as one of the most impressive displays of ne waza Marcus NYMAN (SWE) won the gold medal in the -90kg category here in Antalya. In the final Nyman faced number two seed TOTH Krisztan (HUN) against whom the Swede had an unenviable 2-6 record. But Nyman knows his strengths and when the opportunity arose to attack in ne waza Nyman was quick to take it, finishing off Toth with tate shio gatame. Having won gold in Tbilisi last week, Nyman’s back-to-back Grand Slam gold medals will see him take his place in the top ten on the WRL. It is not be the first time that Nyman has achieved back-to-back Grand Slam golds having done the same back in 2016, the year in which he went on to take 5th place at the Rio Olympics. Nyman genuinely looks a class act on the ground and solid standing up. In this, the Olympic year Nyman’s preparation, timing and execution looks to be on course for Tokyo. In the first of the bronze medal contests Li KOCHMAN (ISR) defeated number three seed Mihael ZGANK (TUR). Kochman looked comfortable and confident and threw Zgank with a neatly timed right o soto gari left o goshi combination for the only score of the contest. In his 20th Grand Slam David KLAMMERT (CZE) finally came up with a medal. In the second of the bronze medal contests Klammert defeated Komronshokh USTOPIRIYON (TJK) when he took over an uchi mata effort to throw Ustopiriyon with nidan ko soto gake for the winning score.

Former world champion HAMADA Shori (JPN) completely outclassed the opposition to take the gold medal in the -78kg category. In the final the number one seed defeated Beata PACUT (POL) pinning the Polish athlete with kuzure yoko shio gatame. In the first of the bronze medal contests number four seed Antonina SHMELEVA (RUS) defeated MA Zhenzhao (CHN). In the second of the bronze medal contests number three seed Karla PRODAN (CRO) had to settle for 5th place when she was caught in kami shio gatame by Vanessa CHALA (ECU) the later winning her first ever Grand Slam medal.

In the final of the -100kg category number four seed Zelym KOTOSIEV (AZE) faced number three seed WOLF Aaron (JPN). The Azeri fought a tactical battle with former world champion Wolf, eventually collecting two shidos to the three of Wolf to give Kotosiev his first ever Grand Slam gold medal. Still getting used to his new category Aleksandar KUKOLJ (SRB) came close to picking up a medal. However, in the first of the bronze medal contests the Serbian lost out to number two seed Arman ADAMIAN (RUS) who threw Kukolj with tani otoshi for ippon. In the second of the bronze medal contests Grigori MINASKIN (EST) stunned Kyle REYES (CAN) within eight seconds with daki wakare for ippon.

Raz HERSHKO (ISR) had a difficult task on her hands when in the final of the +78kg category she faced XU Shiyan (CHN). Slightly undersized for the super-heavyweight category, It was the plucky Hershko who scored first with a really well executed ko uchi gake that brought the Israeli waza ari. Xu came back in the dying seconds to level the scores. Then, in golden score Hershko  finished things off in style throwing the Chinese athlete with left sode tsuri komi goshi for waza ari awasete ippon and the gold medal. In the first of the bronze medal matches Hortence MBALA ALTANGANA (CMR) defeated Sonia ASSELAH (ALG) after Asselah collected a third shido for passivity. In the second of the bronze medal contests WANG Yan (CHN) was defeated by number one seed Nihel CHEIKH ROUHOU (TUN).

Tamerlan BASHAEV (RUS) continues to wreak havoc in the super-heavyweight category despite not even being his country’s number one. The diminutive Russian first disposed of current world champion Lukas KRPALEK (CZE) before in the final of the +100kg category throwing world and Olympic silver medallist HARASAWA Hisayoshi (JPN) with left ippon seoi nage for ippon. Time is fast running out for the likes of Krpalek and Harasawa to work out how to handle Bashaev; that is if the Russians decide to go with him and not Inal TASOEV (RUS). In the first of the bronze medal matches Stephan HEGYI (AUT) overcame Ushangi KOKAURI (AZE) when the Azeri collected his third shido for passivity. In the second of the bronze medal contest a slightly out of form Krpalek found himself up against Temur RAKHIMOV (TJK). It took two minutes for Krpalek to find his rhythm, catching Rakhimov with sumi gaeshi but then narrowly missing out on finishing off in ne waza. A minute later Krpalek repeated the sumi gaeshi to come up with a second score and a bronze medal that clearly pleased him.