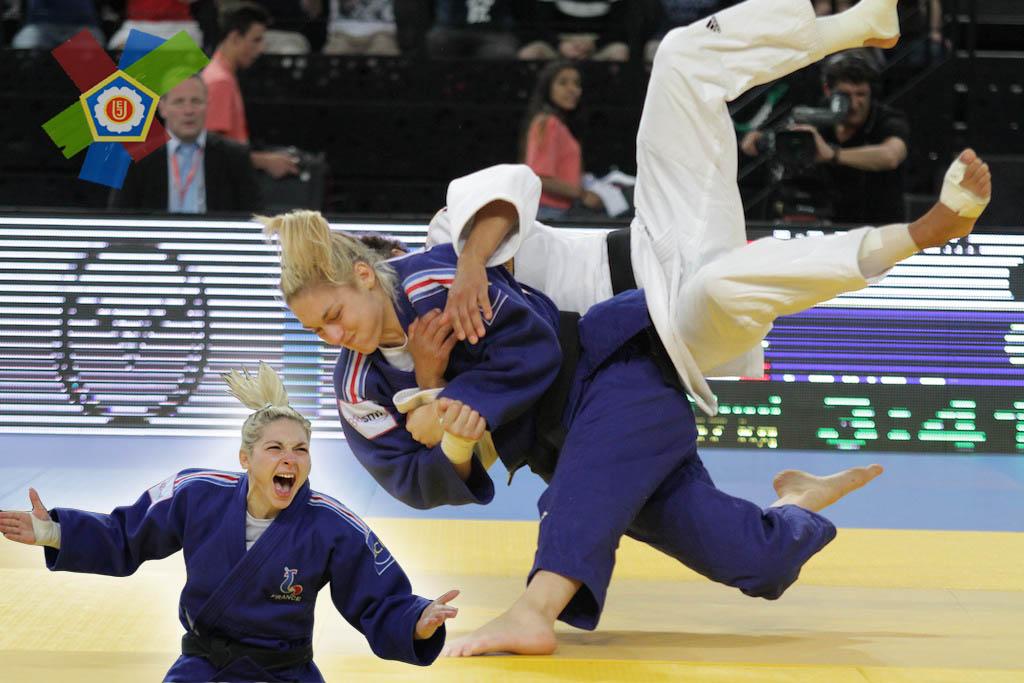 Automne Pavia (FRA) defended her European title in the women’s -57kg as day one at the European Judo Championships wrapped up Thursday in Montpellier. France also celebrated a surprise gold medal for Loic Korval in the men’s 66kg.

Pavia had to overcome a challenge by Corina Caprioriu (ROU) in the semi-final. “This was my toughest match of the day. I just won by penalties”, the Olympic bronze medalist said. In the final, Pavia had not much trouble with Miryam Roper (GER) and threw her quickly for ippon. The victory was especially sweet since it happened at home. “I have trained hard for this and I am so glad that I was able to win here in France. My family and friends were here and it was great to win before their eyes”, the Frenchwoman noted.

For Roper, it was still a personal victory since she battled an injury in her left ankle joint. “I am extremely happy with silver. Ten days ago I was still thinking whether I could go to Europeans or not”, the German said. She easily defeated Sabrina Filzmoser (AUT) in the semi-final, but Pavia was too strong for her in the final.

Filzmoser went on to claim the bronze medal. One year ago, the Austrian suffered a broken arm in the final against Pavia. “This medal means so much to me. It has been a long time since I stood on the podium, since I was in hospital last year and missed the medal ceremony”, Filzmoser shared. The other bronze medal went to Telma Monteiro (POR), who went through the repechage.

Korval could tell a comeback story as well. The Frenchman beat Sugoi Uriarte Marcos in the semi-final by yuko and then overcame his teammate David Larose in the Final on penalties. “This first title is a great satisfaction for me. After I won the bronze medal in 2010 I went through three tough years, I needed one year to come back to the sport. But I told you, I will make it! It was a hard earned victory, but it is there”, he commented.

Larose sent Mikhail Pulyaev (RUS) in the semis to the bronze medal match by ippon, but in the final he appeared not as aggressive. “I injured my right knee in the warm up this morning with a partner and the injury affected my performance today”, the Frenchman said.

Pulyaev took bronze over Georgii Zantraia (UKR). “These are my first Europeans and winning a medal motivates me a lot for the future. At the World Championships last year I lost to Zantraia in the bronze medal match, and now I took my revenge”, Pulyaev commented. It was also the first medal for the second bronze medalist, Dzmitry Shershan (BLR). “It was a hard day, but I made it. After I lost in the quarter-final I was able to regroup quickly”, he explained.

2013 European Champion Amiran Papinashvili (GEO) and 2012 European Champion Beslan Mudranov (RUS) met in the men’s -60kg final. Nobody scored and the match went into the Golden Score where Papinashvili received a penalty for inactivity and subsequently lost. “Coming here, I didn’t really think that the European Championships are the most important competition for me this year, as my focus is on the World Championships. So I was quite relaxed and I just wanted to do my best and to do as many fights as possible”, Mudranov revealed. In the semi-final, he won by shido as well. Papinashvili benefitted from a disqualification of his opponent, Ilgar Mushkiyev (AZE), in the semi-final. The Georgian was so disappointed with his loss in the final that he refused to comment.

Mushkiyev recovered to win bronze. “Honestly, I don’t know what I got these penalties for and I was upset. But having a medal is nice and it is an addition to my treasure box”, the Azeri commented. Hovhannes Davtyan (ARM) took the other bronze medal. He had silver in 2012. Olympic Champion Arsen Galstyan (RUS) who had lost in the quarter-final withdrew from the repechage match due to his foot injury.

World Champion Majlinda Kelmendi (IJF) reigned supreme in the women’s -52kg. In the semi-final she brushed off a challenge by Mareen Kraeh (GER), beating her by waza-ari. In the final, the athlete from Kosovo faced defending champion Natalia Kuziutina (RUS) and defeated her by yuko. “I am very proud now. Now I am World and European Champion and the only thing that is missing is an Olympic medal”, Kelmendi said. “For me, the most important goal is to win a medal at the Olympic Games, no matter which one, because it would be the first for my people.”

Kuziutina quickly beat her teammate Yulia Ryzhova in the semi-final, but found no means against Kelmendi in the final. Gili Cohen (ISR) and Andreea Chitu (ROU) shared the bronze medals.

Eva Csernoviczki (HUN) defended her title in the -48kg. The semi-final against Kristina Rumyantseva (RUS) was tough and she advanced only by shido. In the final, 18-year-old Amadine Buchard (FRA) showed a lot of resistance and even took the lead by wazar-ari. Csernoviczki was able to catch up and the match went into the Golden Score. There, Buchard received a penalty after 38 seconds, giving the Hungarian the title. “I felt some pressure coming here as the champion and the semi-final was hard. The fight against the Russian took a lot of energy out of me. But overall I am very pleased with my performance”, Csernoviczki shared.

Newcomer Buchard was disappointed, although winning silver in her debut at Europeans is not shabby for a teenager. “I made mistakes. I am disappointed, because I came here to win. I felt some pressure, but once I made it through the semi-final I was bit more relaxed”, the French judoka told the press.

Rumyantseva and Maryna Cherniak (UKR) earned the bronze medals. “It wasn’t quite enough to get to the final today. The Hungarian (Csernoviczki) has more experienced and is older than me”, Rumyantseva analyzed. “My most valuable experience from this event is that nobody is invincible. You can beat anyone”, she added.

Pavia and Mudranov were selected players of the day by the EJU media team.