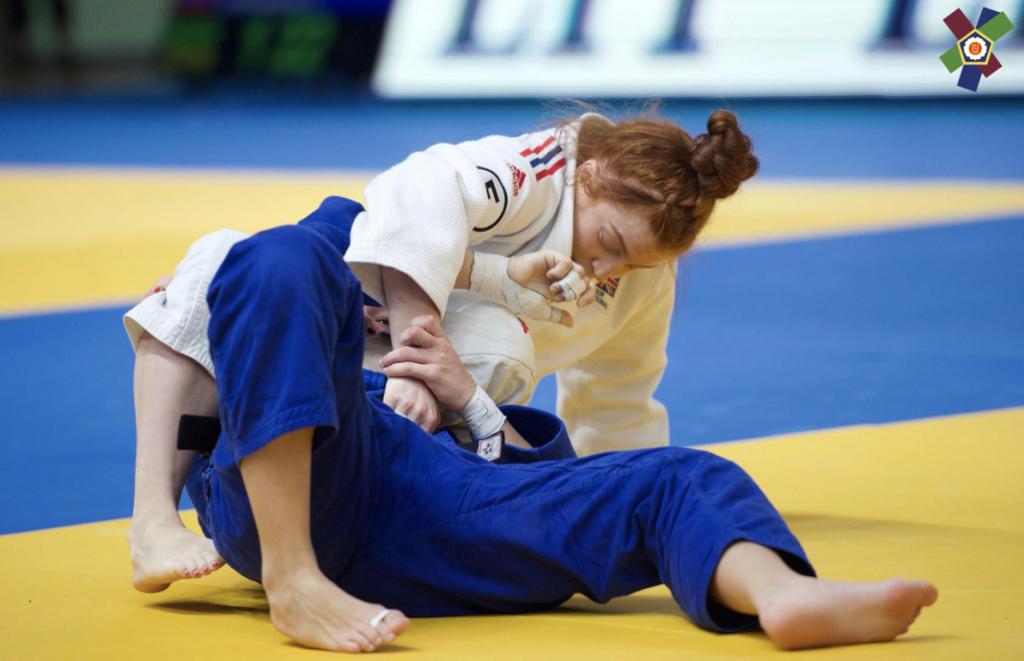 There were some major surprises on the first day of the European Open in Tallinn 2019, the unpredictable sport delivering some heavy hitting shocks.

The shores of Helsinki are a mere 50 miles from Tallinn, and over the short distance came a strong support for the Finnish team, who were a great crowd for all of the athletes walking off the tatami with a win today, creating a warm atmosphere.

Team Finland came with a number of talented athletes but only one made it in to the final, 16 year-old Pihla SALONEN in the -52kg category. SALONEN managed to defeat Junior World bronze medallist, Aleksandra KALETA (POL) in her pool as well as Spanish contender, Irene DIAZ VIDAL, however it was her semi final that attracted not only the Finnish spectators attention, but that of the whole arena.

As a regular IJF World Tour competitor, taking Grand Prix and Grand Slam medals, there were high expectations of Astride GNETO (FRA) to make it in to the final, and replicate her success in the Luxembourg European Open two weeks ago with another gold medal. Perhaps she underestimated the young Finnish athlete as the pair ended up with a waza ari score each, and eventually, a clinching moment that SALONEN took advantage of to defeat GNETO.

Making it to the final was a huge accomplishment for the blue belt, and despite a loss in the final to Grand Prix and Grand Slam medallist, Anja STANGAR (SLO), this performance was incredible and the young athlete will definitely be one to watch in the future.

Of course, some of the seeded players made it to the gold medal contest, their World Ranking status and abilities giving them an advantage over the less experienced including Priscilla GNETO  (FRA) and Lubjana PIOVESANA (GBR). However, the latter has been trying her utmost to make a recovery following surgery. Within judo there are always injuries, followed by rehabilitation and eventually back to training, but this was slightly different. Unfortunately for the -63kg athlete, her general health has played a role in her inability to perform at her fullest potential and even withdrawing on multiple occasions, and so it was decided that surgery would be the only option.

Returning back to competition in Tallinn, PIOVESANA wanted to gain back the feeling of competing again before throwing herself back in to major tournaments and give herself the best chance of more fights, which is exactly what she found today.

I think it’s not as hard but there were girls in the weight that had really performed well in Grand Prixs this year so it was never going to be easy, but I’m more pleased with the performance over the result. I had a really hard past few months with being sick for a long time and then having a horrible surgery and this medal just has given me the motivation and made me so happy, looking back to a couple of months ago, I’m a different person.

The British Judo team have a wealth of talent in this weight category, with four of them, including PIOVESANA, all collecting points on the IJF World Tour. So aside from competing against international players, first she has the fight at home against Alice SCHLESINGER, Amy LIVESY and Lucy RENSHALL, all the while the race is on for Olympic qualification. We see this in many countries that have specific categories that are particularly strong but this isn’t always a hindrance to the athletes as PIOVESANA explains,

I’d say being the youngest is hard being in a solid set of girls who all perform as then it always means I need to chase behind but I like it because when they perform well, it also motivates me as I want the same success.

Next up for the U23 European Champion is the Abu Dhabi Grand Slam at the end of this month, followed quickly by the Perth Oceania Open where she hopes to carry on developing her performances and build on her strength following her time out this year.

Tomorrow we will see the heavier weight classes competing for the European Open gold medals in the -81kg, -90kg, -100kg, +100kg, -70kg, -78kg and +78kg categories. With more ranked players we could be in for an exciting day of judo.

Follow the live stream tomorrow from a later time of 11am (local time) at www.eju.net.