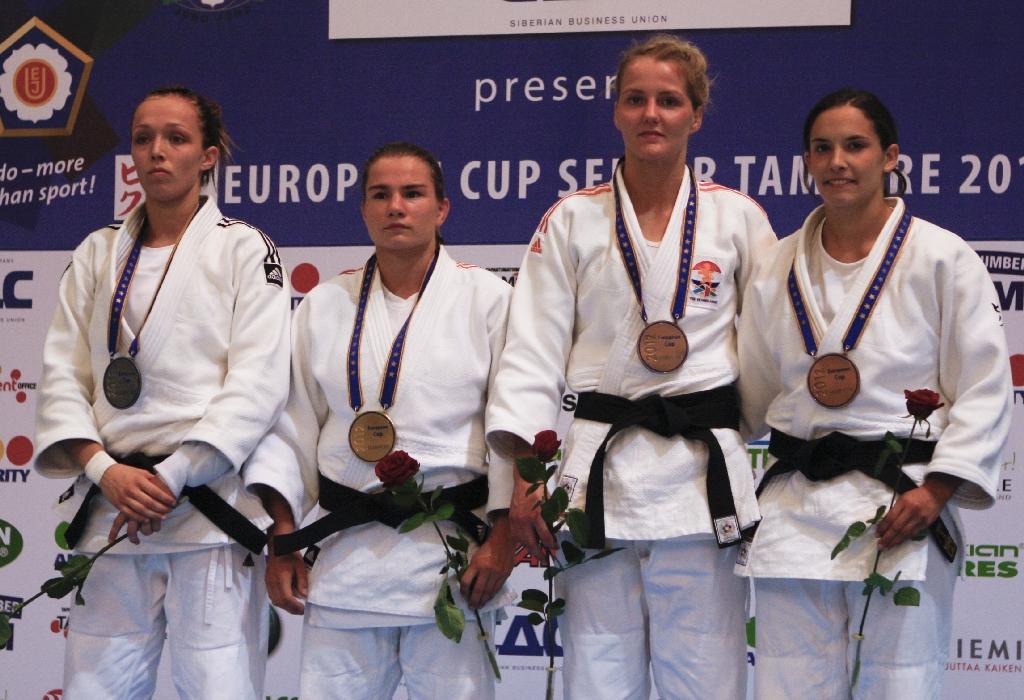 Poland is proud to lead the medal tally after the first day of the HIKU European Cup in Tampere. The Polish team won two gold medals, that’s one gold medal more than the Dutch team that won eight medals and was by far the most successful in medals.

Especially the male judoka from Poland impressed with the two gold medals. Gregorz Lewinski won the U66kg category against Finnish homeplayer Vadud Balatkhanov. The match went into extra time at 0-0. Balatkhanov’s furious speed continued also in the extended time and was close to a victory, but the point was awarded and it was Lewinski who benefit after a second penalty for the Fin.

His compatriot Piotr Kurkiewicz (POL) won the category U73kg. He won the final against Dutch Sam van ‘t Westende. The medal tallye would have looked different when he didn’t win but Kurkiewicz didn’t want to have the same result he made in the European Cup in Orenburg last year where he finished second. This time the gold medal was for him and he collected his first victory in a European Cup and gave Poland the lead in the ranking.

Tampere is a real judo city and they have quite some history in organizing good quality events. After organizing the World Cup in 2005, the European senior Championships were held in the city with 200,00 inhabitants in a beautiful scenery of lakes. In 2009 Tampere was the capital for the European Youth Olympic festival and the European Cup for next year is scheduled in the calendar of the EJU.

Tampere has excellent connections from all parts of Europe and 22 nations came to Tampere to compete, in total 204 participants.
Elnur Alijev from Estonia, not far from Finland won the category U60kg. He was able to defeat Gregg Varey from the UK. The four times Estonian Champion booked his first European Cup victory.

In the women’s category the Dutch dominated in terms of medals. The division U57kg had almost a complete Dutch podium but Emilie Amaron (SUI) won bronze. She was on the stage with Juul Franssen (NED). The final was between Dutch 20-year old Sanne Verhagen and 22-year old Carla Grol. The number two of the Junior World Championships Verhagen won the match and claimed her second victory in a European Cup this year. Previously she won in London.

Russia won a gold medal U48kg by Alesya Kuznetsova although the number of participants was low it was a good practice. Also Kuznetsova won silver at the World Championships for Juniors last year in Cape town and is a good talent who now successfully makes the connection with the seniors.

Lotte Denoo likes the northern countries. Last year she won silver at the European Cup in Boras, this weekend she took the gold U52kg in Tampere. In the final she was able to beat Darya Predeina. Two dutch ladies: Kitty Bravik, back from an injury, and Miranda Wolfslag won bronze.

The Swedish fans could cheer for the gold of Anna Bernholm. Although not very much appreciated by the homefans who preferred to see their Olympic representative Johanna Ylinen to win. Ylinen was dominating over Sweden’s Bernholm in the beginning. Many attempts to lift the Swedish girl didn’t results in a score and 40 seconds before the end of the match Bernholm struck with an ippon and won the gold.