Polish and Slovenian judoka shine in international field in Liberec 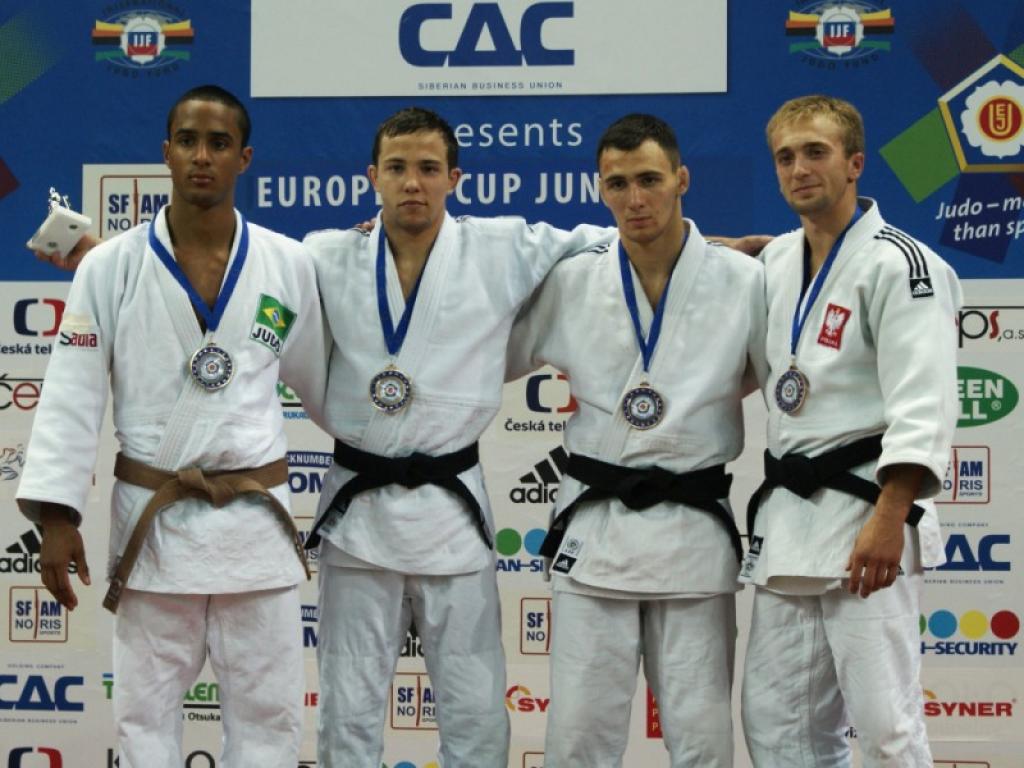 In total 370 junior athletes from 30 countries are competing during this weekend in Liberec Junior European Cup in the Czech Republic. The competition is held in a state-of-art sports hall and the athletes have been welcomed by the mayor of the city.

The first gold medal was awarded to Silva of Brazil in -44 kg category. Because there were only 3 young ladies in this category there was no final match. “I am extremely happy”, Silva said. “I know my competitors from previous tournaments and camps and both fights were hard. Especially the Bulgarian girl is very strong”.

In the first final match of the day for men U66kg Adrian Gomboc (SLO) claimed the victory when he defeated Brazilian Ricardo Santos in the final. In a field of 45 participants Gomboc won all his six fights. The final was very even but Santos was penalised for passivity. After the penalty Santos put everything in the attack and some 20 seconds before the end of the match also Gomboc was penalized and the  final went to the golden score match. Gomboc dominated the grips and after the second penalty for Silva he won the gold for Slovenia. “I was down for a couple of seconds after the penalty which came in the last seconds of the match”, Gomboc said. “But when the Golden score match started I felt confident to get it. I felt that my grip was stronger. I am very much satisfied with my performance here”.

Polish judoka Michal Bartusik won a bronze medal, in the semi final he lost to Gomboc. Dmytro Raskin of the Ukraine won bronze. He lost to Bartusik but fought back well in the repechage.

Mr. Kim, the coach of the Korean team, is enjoying the current beautiful weather in Central Europe because, as he said, the weather is stormy now in Korea. And indeed he has brought a real Korean judo storm to Liberec. Mr. Kim said that the tournament in Liberec is one of the final tests of the Korean juniors before the junior World Championships and that he brought the best Korean juniors to Liberec. And the Korean athletes have proved his expectations. They have lost three matches only during the day and won three gold and two silver. In the category U57kg Fabienne Kocher lost her final against Korean You-Jeong. This year she won the European Cup in Lyon. Arleta Podolak won a bronze medal, one week after her victory in Wroclaw, not too far from Liberec.

The second gold for Korea was added by Jo in -48. Shin in -55 kg was very close to the third one but Torrente of Brazil, despite being yuko down, countered Shin for ippon. “My coach Mr. Dougles Vieira advised me to risk in the last minute. I made Shin to make a weak attack which I have countered for ippon. I would like to thank to my coach for this advice”, said happy Torrente.  Second gold for Brazil!

The third gold for Korea added An in 60 kg, perhaps the best athlete of the day. An has proved on his reputation of being the best in -60 kg in Korea. The final against Falkevskyy was breathtaking. An managed to escape from a pin applied by Falkevskyy just 5 seconds before ippon and then he threw him for waza-ari with seoi-nage. Because Falkevskyy was penalized once An won the gold.

Pienkowska of Poland won the gold in -52 kg after countering Hayat of Israel for waza-ari. “It was a great tournament”, Pienkowska said. “The final was extremely difficult. I hope to repeate the same performance in Sarajevo”.

The last gold of the day was won by Margelidon of Canada who defeated Kim in the final by throwing him for yuko with ko-uchi-gari.  Margelidon also scored the ippon of the day in his semifinal match against Mendes of Brazil with a beautiful uchi-mata being waza-ari down. Jakub Jecminek pleased the home crowd with bronze in -73 kg.