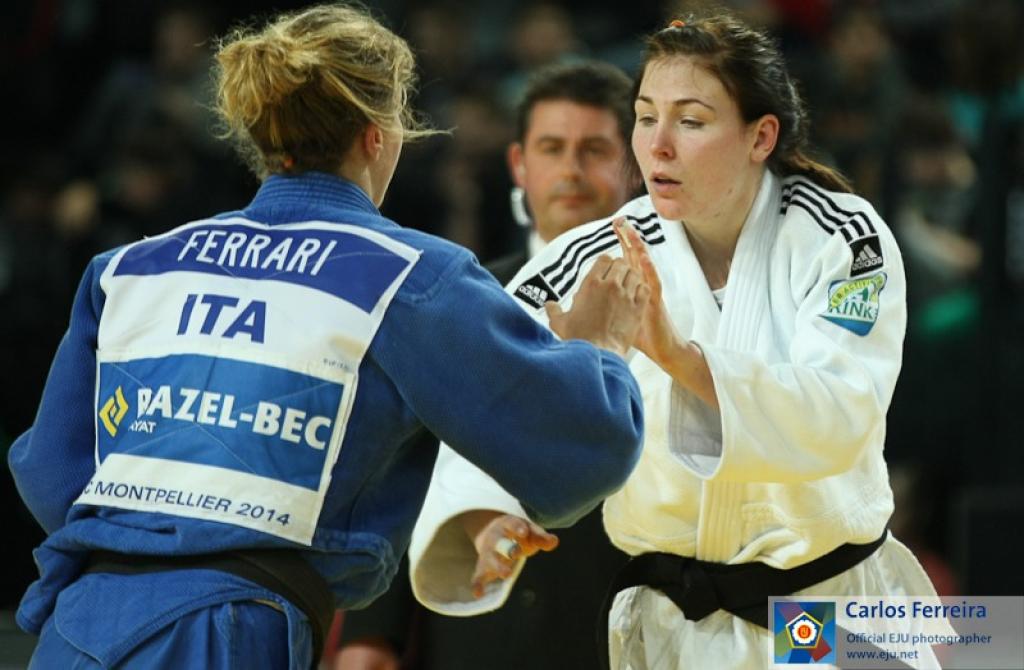 While top contenders such as Kim Polling (NED) and Loic Pietri (FRA) shone in the preliminaries Friday at the European Judo Championships in Montpellier, France, several medal hopefuls faltered.

Defending European Champion Polling was confident in the first two rounds, defeating her opponents by Ippon ahead of time. In the semi-final Maria Bernabeu Avomo (ESP) is waiting for her. The Spaniard looked strong especially in the quarter-final where saw Bernadette Graf (AUT) off to the repechage after just seven seconds.

World silver medalist Laura Vargas Koch (GER) put out strong performances as well in her first two matches and is up against Fanny Posvite (FRA). The Frenchwoman can count on the loud support of a patriotic crowd.

A major upset was Gevrise Emane’s (FRA) loss in the first round to Katarzyna Klys (POL).

World Champion Pietri disposed of Stefan Kuciara (AUT) in the round of 32 in just 15 seconds but Konstantins Ovchinnikovs (LAT) in the round of 16 offered more resistance. The Frenchman looked stronger against Szabolcs Krizsan (HUN) and advanced to the semi-finals. Pietri’s next opponent is Sven Maresch (GER). The German had a slow start in the first round, but gained strength as he went on. His opponent in the quarter-final, Diogo Lima (POR), was disqualified for a forbidden move.

Reigning European Champion Avantdil Tchirikishvili (GEO) appeared cautious in his first match against Alexander Wieczorzak (GER) as well as in the quarter-final against Roman Moustopoulos (GRE) and won by penalties. Only in his second fight, the Georgian was much more awake and beat 2012 European Champion Sirazhudin Magomedov (RUS) by Ippon. He has to watch out now for his next opponent, Aliaksandr Stsiashenka (BLR) who was on fire in his first three matches and didn’t give his competitors much of a chance.

2012 European silver medalist Murat Khabachirov (RUS) was eliminated in the round of 32 as was Joachim Bottieau (BEL).

In the men’s -73kg, Olympic silver medalist Miklos Ungvari (HUN) looked in good shape on his way to the semis and had not much trouble in his first two rounds. His next opponent is Dex Elmont (NED).

From the other side of the draw, defending European Champion Rok Draksic (SLO) was quick on his feet as usual and relegated Zebeda Rekhviashvili (GEO) to the repechage after just a little over two minutes. The Slovenian will now face 2012 European Champion Hugo Legrand (FRA). Legrand had to work hard to make it to the semis and also battled a nose bleed.

One of the medal contenders that went out early was Dirk van Tichelt (BEL).

In the women’s -63kg Agata Ozdoba (POL) surprised in the first round when she eliminated World Champion Yarden Gerbi (ISR). The Polish judoka beat Hilde Drexler (AUT) in the quarter-final and now will meet Tina Trstenjak (SLO) in the semis.

To the delight of the home crowd, defending champion Clarisse Agbegnenou (FRA) advanced confidently to the semifinal. With the Frenchwoman and World bronze medalist Anicka van Emden (NED), this semi-final promises to be a highlight. Van Emden was the top seed from pool D and proceeded to the semi-final as expected.