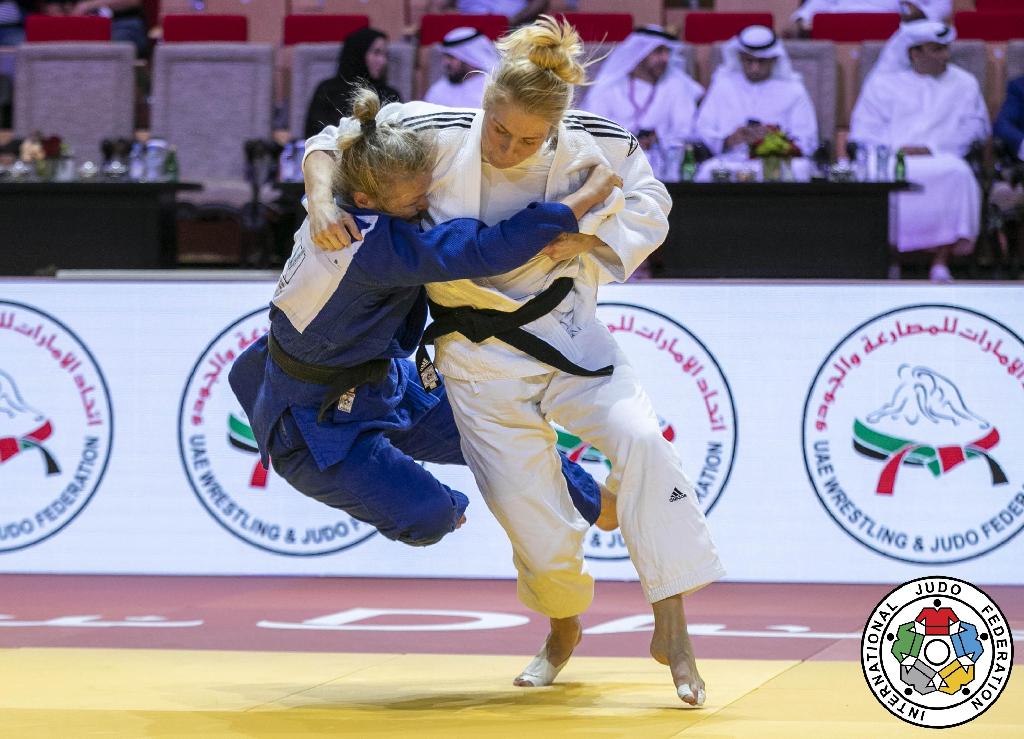 Day two of the Abu Dhabi Grand Slam saw Kim POLLING (NED) storm to an impressive fourth career Grand Slam gold medal. The 28-year old Dutchwoman came out on top of a field that contained seven of the world’s top ten, including the current world champion Marie Eve GAHIE (FRA). Polling may consider herself that on her way to the gold medal contest she managed to avoid facing any of the seven. Number 5 seed Maria PORTELA (BRA) was downed by Sara RODRIGUEZ (ESP) whom Polling duly defeated in round three. Number 4 seed Margaux PINOT (FRA) was defeated by Elisavet TELTSIDOU (GRE) whom Polling went on to defeat in the quarter-final. Current world champion Gahie suffered a surprise early exit in the third round and it was Elvismar RODRIGUEZ (VEN) who faced Polling in the semi-final.


Polling was in scintillating form and had defeated all three of her opponents by ippon. Rodriguez was stunned when after only 15 seconds Polling caught the Venezuelan with o soto gari for waza ari. Within a minute Polling scored waza ari awasete ippon with a yoko tomoe nage to take her place in the final. Making her way to the final in the lower half of the draw was Polling’s team mate number 7 seed Sanne VAN DIJKE (NED). Quite apart from the tension of a Grand Slam final there was the important matter of Olympic qualification points. A win for Polling would see her climb the ranking list. There was too the personal nature of the head-to-head which going into the final Polling led 3-0.

There was, if truth be told, an air of inevitability about Polling’s defeat of Van Dijke. As spirited an effort as Van Dijke put up, Polling controlled the contest, made the better attacks and appeared the more confident. The of right sided o soto gari that Polling launched at almost the half way point saw Van Dijke catapulted to the tatami for ippon and with that Polling took the gold medal.