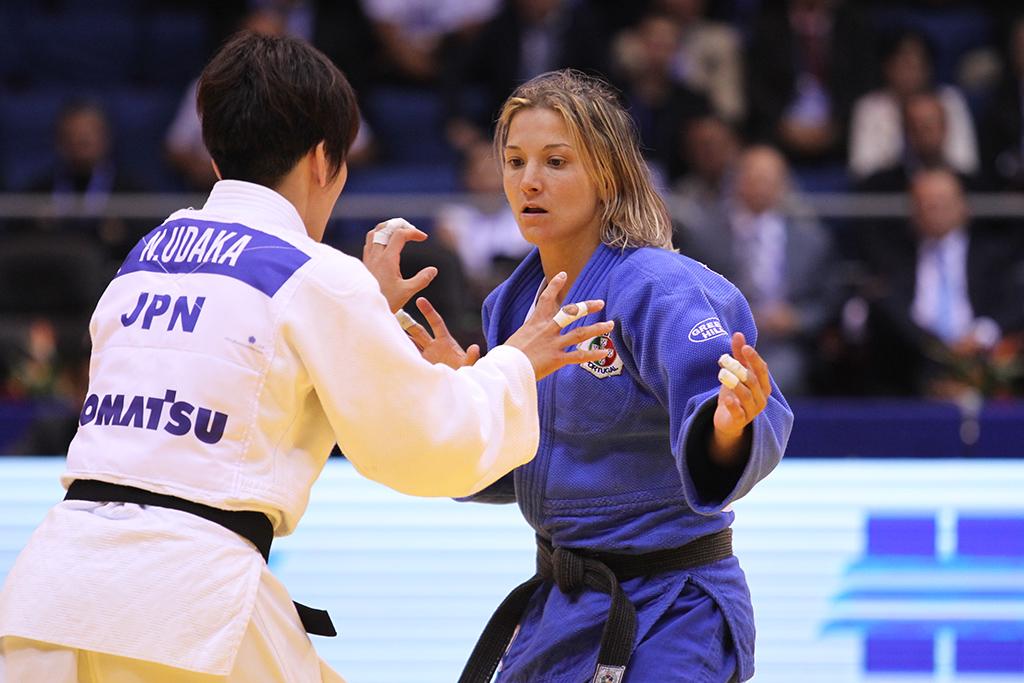 In the women’s -57kg category Portugal’s Telma Monteiro had a first round bye before facing Sevara Nishanbayeva KAZ whom she threw within 30 seconds with ippon seoi nage for ippon. Next up was Marti Malloy USA against whom Monterio had 4-1 winning record, the one loss coming in the London Olympic Games in 2012. Malloy looked in good form having earlier defeated Olympic champion Matsumoto Kaori JPN. But, in a difficult contest, Monteiro edged her way past the American by a single yuko. Monteiro was more convincing in her quarter final match against Switzerland’s Fabien Kocher scoring first waza ari then ippon with her trade mark ippon seoi nage. This brought about a semi final match with Dorjsuren Sumiya MGL whom Monteiro had defeated in their two previous meetings. Although Monteiro fought carefully the Portuguese was ready when the opportunity presented itself to launch a spectacular attack that resulted in Dorjsuren being thrown with ippon seoi nage for ippon. The final against Udaka Nae JPN did not go Monteiro’s way and, in the golden score period, Monteiro was given hansokumake for a leg grab making it four silver medals and one bronze for the Portuguese. “I am very happy, because I did good judo today, many throws. I know from the beginning many people fought I were not the favourites. My last time on [world championship] podium was in 2010. I worked a lot to be on the podium again. So I did my job and I am very happy. I am very proud of that” said Monteiro. In answer to a question regarding her fight with against Marti Malloy, Monteiro said “I was expecting a tactical fight, where I knew if I did my best I could throw. My goal was to go to the final. I worked very hard. In London it was not the best day for me. I always told myself that I don t want to be the favourite, I want to be the winner, I do fight by fight. And I got to the final”. There were bronze medals for current European champion Automne Pavia FRA who defeated current world champion Rafaela Silva BRA, and Sanne Verhagen NED who defeated Dorjsuren Sumiya MGL. Meanwhile in the men’s -73kg category Musa Mogishkov RUS won bronze and was the sole European medal winner in the weight. Gold went to Nakaya Riki JPN, Hong Kuk Hyon PRK and a bronze to Yertugan Torenov KAZ.