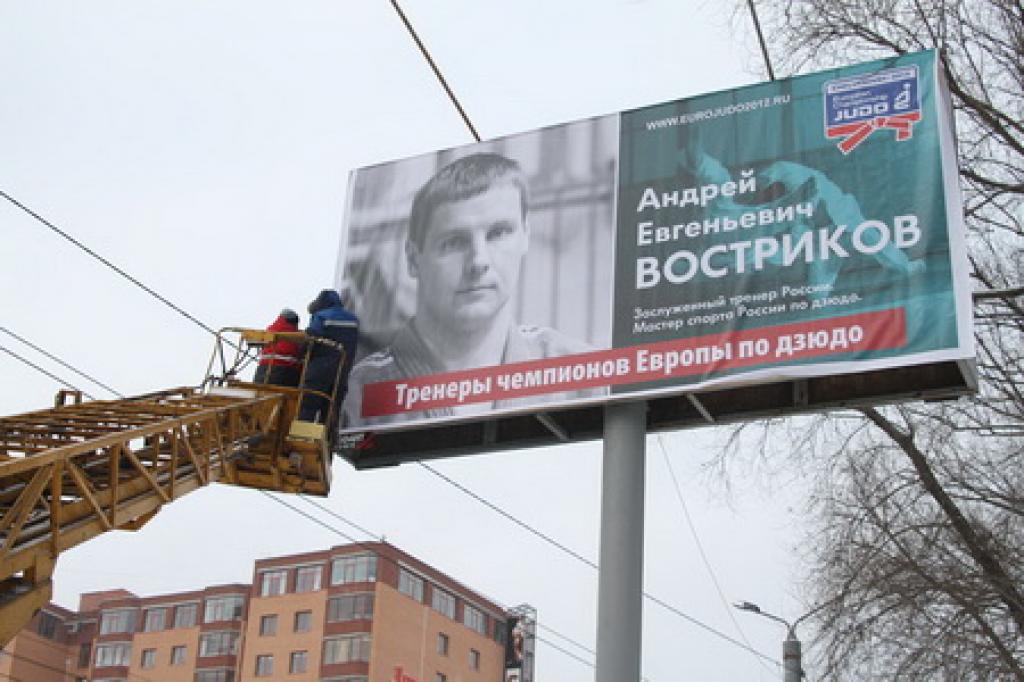 On the eve of the 2012 European Judo Championship committee of the tournament decided to pay a tribute to the masters that made a sport career for many Chelyabinsk athletes – posters with a faces of outstanding coaches appeared on the streets of the city.
On the posters that were printed specifically for the Euro-2012 there are judo coaches of different generations. These are the oldest legends of Chelyabinsk judo – Haris Yusupov, Alexander Miller, Yuri Popov, Viktor Moseichuk and young and successful coaches Vyacheslav Shishkin, Andrey Vostrikov and others.

«There are very few judo schools In Russia that achieved good results from the very beginning. Of course, it is the merit of Haris Yusupov in South Ural. He founded the Chelyabinsk Judo and brought up plenty of outstanding athletes and coaches. Alexander Miller grabbed his baton – he trained the Olympic medal winners Grigorij Stepkin and Vitaly Makarov, and many European and World champions. Yuri Popov is really old, but he has been working now at the Center for Olympic training with children», the executive director of the Judo Federation in Chelyabinsk region Vyacheslav Tutik says.

He notes that all of these people have brought up the Champions that glorified the Chelyabinsk judo school among Russia and around the world. Today the way of masters are being continued by the younger generation of teachers.

So on the first poster that is established at the cross of the Sverdlov Avenue and Truda street there is the face of senior team coach of Chelyabinsk region Andrej Vostrikov. He prepared two masters of sports of international class – the twice European champion among young people, the bronze medalist of the World Summer Universiade Zafar Makhmadov and champion of the continent among athletes U23 Dennis Lavrent’ev, as well as the master of sports of Russia, winner of European Championship among cadets Dmitry Zuev.

«I’m glad that the championship committee decided to show us the role of the coaches. We are often live in the shadow of the athletes, and of course, such attention is very nice. I was born and grew up in Chelyabinsk. When I was a little boy I was taking the energy from the spirit of our Chelyabinsk Judo School. Therefore, it is an honor for me to get into the company of such outstanding coaches as Haris Yusupov, Yuri Popov, Alexander Miller and others «, Andrey Vostrikov says.
Posters with the faces of the South Ural’s judo coaches will appear in all districts of Chelyabinsk.