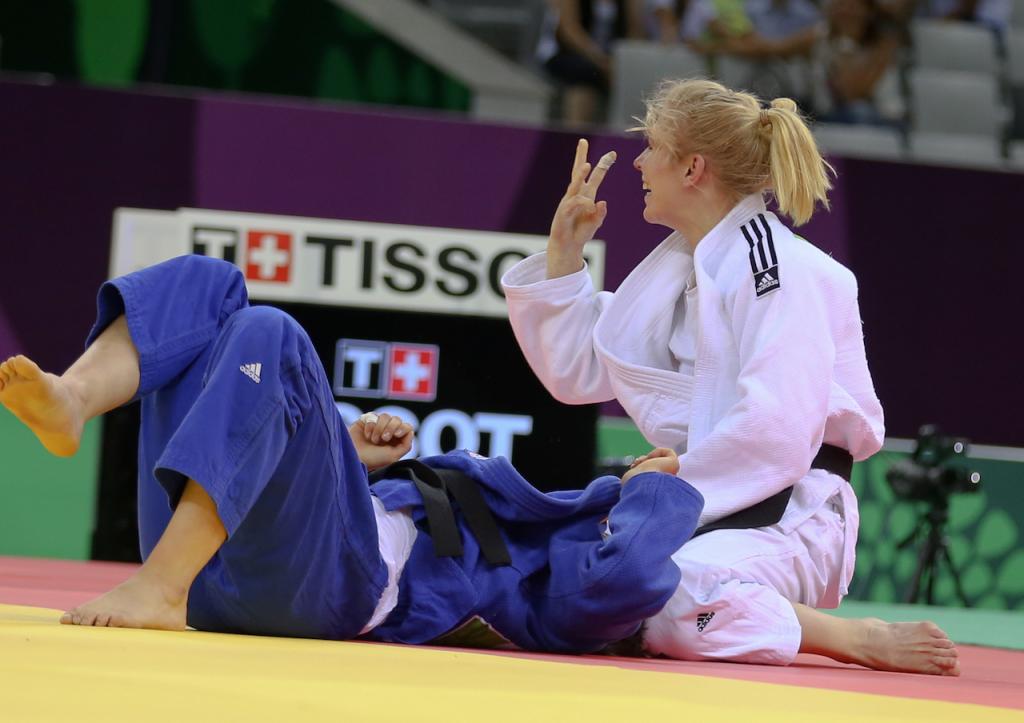 Kim POLLING (NED) brushed aside all opposition on her way to the gold medal in the -70kg category on day two of the European Games in Baku. The world number one made it three European titles in a row with a win that confirms her successful return to top-flight competition after a lengthy injury lay-off. After a first round bye Polling wasted little time in terminating all four of her contests with attractive and powerful ippons.

Polling’s opening contest was against Roxanne TAEYMANS (BEL) and, unfortunately for the Belgian, Polling rekindled memories of the only other occasion on which the two had met (at the junior world championships in Agadir 2010) by defeating her by ippon. Hungarian wunderkind GERCSAK Szabina was next to fall and, despite a spirited start from the junior European champion, she too was toppled for ippon in a little over a minute. This brought about a semi final with Germany’s Szaundra DIEDRICH who decided that all-out attack was the way to tackle Polling; perhaps at a future date. But today Polling was simply too strong and came up with two thumping throws to dash Diedrich’s hopes of an all-German final. And so it was Diedrich’s team-mate, Laura VARGAS KOCH who faced Polling in the final. In fact on every occasion (there have been three) that the pair has gone head-to-head it has been in a final and each time Polling has come out the winner. It was a nervy looking Vargas Koch who stepped up to face Polling and within seconds the German was fending of the first uchi mata, o uchi gari combination from the Dutch fighter. But, having avoided a rather ambitious seoi toshi attack from Polling, Vargas Koch was caught in the follow up ne waza exchange that saw Polling secure the osaekomi with kuzure kami shio gatame for ippon and the gold medal.

“It is going to take a little time for this win to sink-in because it’s been a very long day, it is very late and all the athletes are tired. So I guess I’ll realise it more fully tomorrow,” said Polling. Asked about her thoughts on her opponents today Polling answered, “I did not feel any threat from a specific opponent. Of course there were some people around me saying that I would win against Laura because I had defeated her [Vargas Koch] so quickly last year. But I said heh, it is a final and anything can happen, and perhaps being patient and not getting carried away was the toughest thing to think about.”