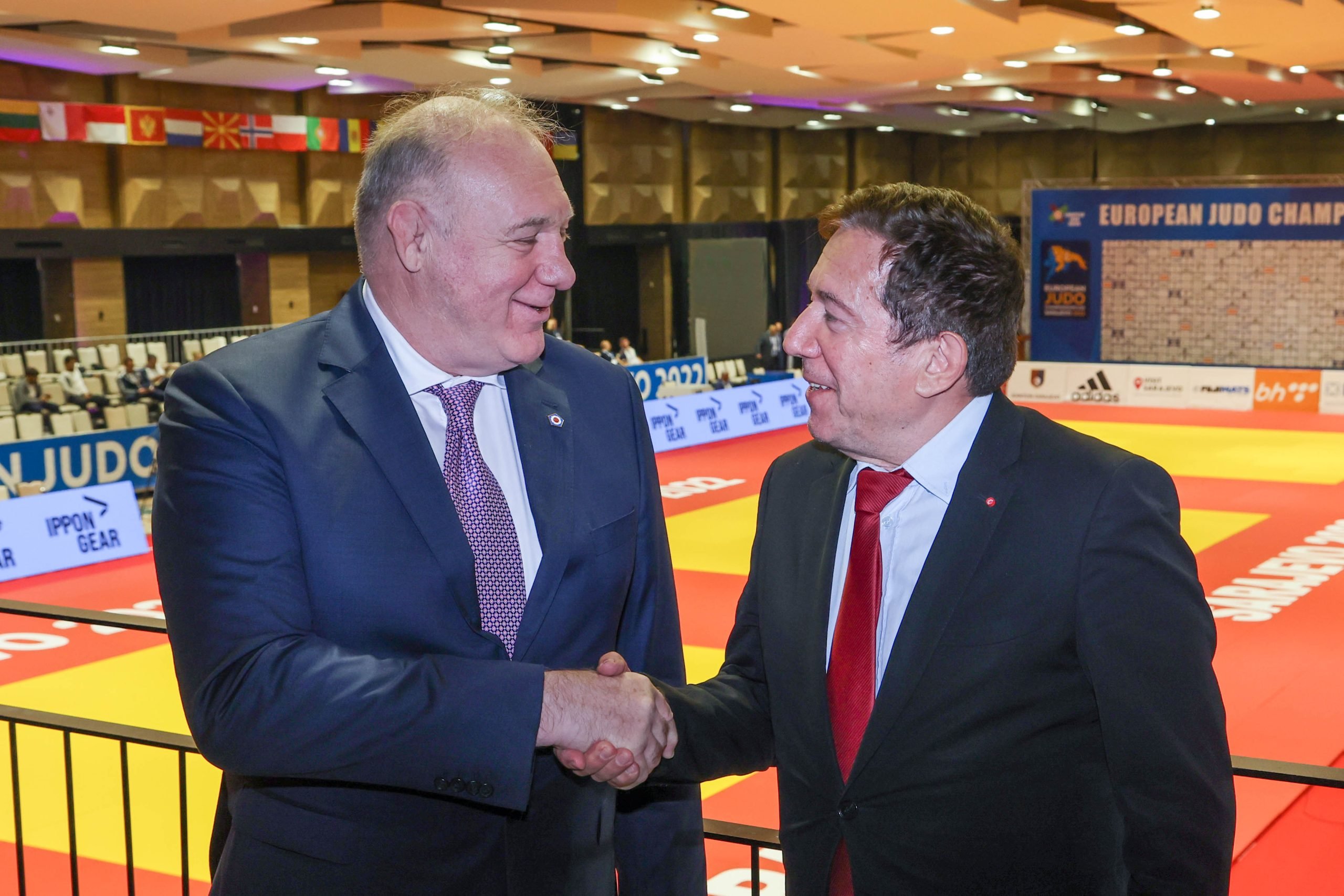 This week we have once again been welcomed to Bosnia and Herzegovina, a national federation who is a regular on the EJU calendar and this year hosted an IJF event as well, the Cadet World Championships.

So today before the final block of the Mixed Team event, EJU President, Dr Lászlo TÓTH was proud to deliver an award to the President of the National Judo Federation of Bosnia and Herzegovina Mr Branislav CRNOGORAC. They were also joined on stage by Minister of Culture and Sports Canton Sarajevo of BIH Mr Samir AVDIĆ.

As a recognition of their outstanding performance as the most successful organiser of 2022, the EJU decided to deliver a special award, ‘Best of the Best’ to Mr Avdic and Mr Crnogorac.

It was the decision of the leaders of the European Judo Union that the National Judo Federation of Bosnia and Herzegovina should receive the ‘Best of the Best’ award. It really is a long time coming, a long series of events have been held here including seven European championships and two world championships. We have such a long collaboration with this federation, since 2003.  It was well received by the president who told me it felt like an Oscar award for them.

We are in the end of the year and so many countries have a lost a little energy or finances by this point but the level here was outstanding. I see so many talented athletes that are our future and they get to perform in a world class environment. I am of course a little sorrowful for these organisers as they didn’t take a medal but I explained to the president that he is such as terrific host, he gifted them all.

In regards to the tournament this week, Dr Tóth was beyond happy with the outcome.

I am very very happy and satisfied, because today wasn’t only a great day, it was magic. The event was really fantastic and after the Cadet World Championships which were hosted here two months ago, I was promised by Mr Crnogorac that we would have the same standard for these championships and he kept that promise. We have received one of the best facilities for judo, for the athletes and coaches, the members of the organising committee, it is important that everyone is taken care of.

As for the actual contests, I joined the meeting of the referees to discuss the level of our contests as well as their work. Only on a couple of occasions did the coaches approach the head table to discuss decisions and were fully accepting of the decisions once an explanation was given so it shows how high the standard of judging is.

I am also very happy that 21 nations took medals here, which means that the achievements are diverse. For us, the careers of these athletes is very important. We know very well how hard it is to transition to the senior level and we know that giving them one more chance can mean everything to them. I think it is a really good strategy from the EJU and we will no doubt see some of these athletes qualify for Paris 2024.