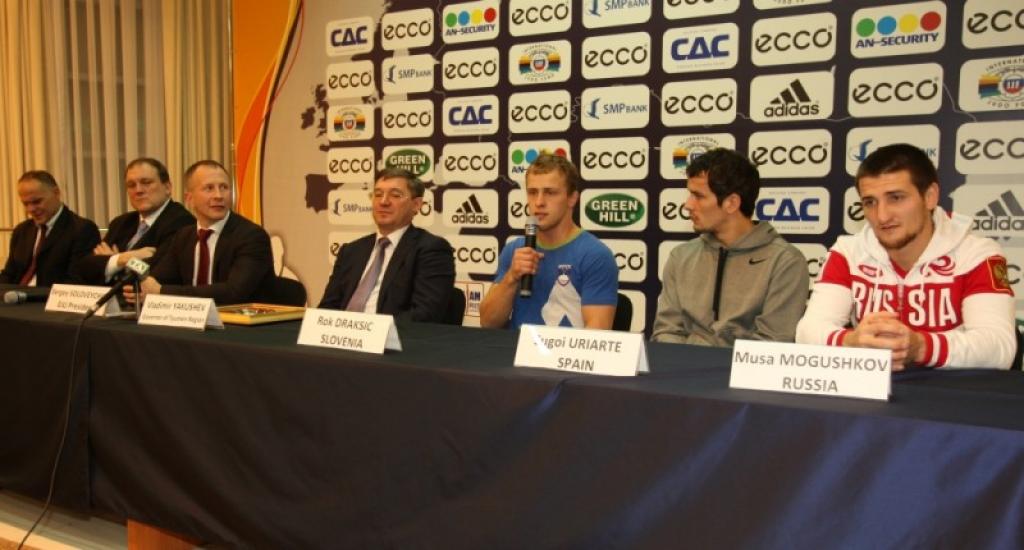 Rok Draksic became the winner of the first ECCO Judo Hero Challenge in Tyumen. In the category U66kg, with an allowance of 5kg more, he defeated his three opponents.

At the press conference the winner thanked the EJU, Tyumen and Musa Mogushkov for this tournament. “After the Olympic Games I lost this was the opportunity to show that I was also a good judoplayer and today I showed it. The first fight against Tsagaaanbaatar Khashbaatar was tough. He is former World Champion and Miklos Ungvari was also very strong, but I was happy to win by ippon against Sugoi Uriarte. Of course you want to be good at the Olympic Games but I lost in the 1/8 final. I just like to fight in Russia.” This year he became World Police Champion in Kazan.

Sugoi Uriarte defeated Musa Mogushkov after five previous losses. “I was happy to win against Musa. He is the best fighter U66kg and he will do well U73kg. For Musa it was difficult to play at home as the expectations are very high. When you lose at the Olympics for bronze it’s bad for the head. I was lucky to be invited, and I was also lucky not to fight to Lasha Shavdatuashvili. I cleared my head and I won against Musa. Now I attacked a lot and it turned out well with a victory.”

Ezio Gamba the manager of the national team for men and women was present in Tyumen and said: “It’s a great opportunity for these athletes for a new challenge is so short time. Also because this is the best of the best, it’s another tournament because it’s not so easy to fight in a new competition. They come from their Olympic preparation. Musa is from here and it’s not too easy to change category now with so much work on his shoulders. The psychology was not so fresh but it’s hard to find the energy for a new competition. I trust him and I am sure he will find a place in the new category U73kg. “

Gamba complimented the winner Rok Draksic. “The final was fresh and Rok Draksic was more sure from the first match. He as in condition to win.”

Musa Mogushkov won a bronze medal and said: “I like to say sorry to the Tyumen citizens that I couldn’t win the gold medal. After the preparation it was very hard and it takes a lot of will to win these fights. Gamba was right it is hard to fight at this level when you are not fully prepared.”

EJU President Sergey Soloveychik commented on the tournament: “The competition includes so many athletes from all over the world. There were not so many spectacular moment, but these are the best judoka of the world, they know eachother well and the level is high. So maybe not spectacular due to the high level.”

He continued: “This event was successful and now we know what we have to improve in the future to continue.”

“We are happy with the team of the Tyumen and the EJU. Soon there is the Judo World Masters in Tyumen, also another great event.”

Vladimir Yakushev the governor of the Tyumen Region. “These kind of events are important for our region. I am not a professional spectator of judo, but I liked the sport and the show. We promoted our region and the sport of judo, so it will become even more popular. Last year there were two championships (World Open Championships and European U23 Championships) that inspired us and that was a good reason to continue with these events in the spirit of judo. It’s important for me that the best sportsmen arrived here. A high level of judo in Tyumen. Soon we will have the Judo Masters here. Today we saw the reaction by the public and the citizens become more familiar in judo and their reactions were nice to support the judoka.”

He thanked president Soloveychik for the trust of awarding this event. “We already had good tournaments here and I hope in the future it will give confidence to the EJU to help us in our hunger for judo events. Ezio Gamba is also present and that he liked the event as well. Tyumen is ready to hold these kind of events and we will continue to keep this relationship.”

Soloveychik thanked the governor for their support and gave an award to the governor as appreciation for the endorsement of the tournament.

Aleksandr Nagibin, Marketing Director of the EJU was head of organizing the event on behalf of the EJU. “This team worked very good and after the Olympics and Europeans that is a good effort. I’d like to thank the Judo Centre and the government. They had a big experience after the two previous events and therefore it went quite smooth.”

The governor added: “We defined the best fighters and Gamba was very successful and I’d like to thank him. London showed that we are in the right direction. He is the best Olympic coach and he deserved the titles.“

Watch all pictures online in our media gallery.