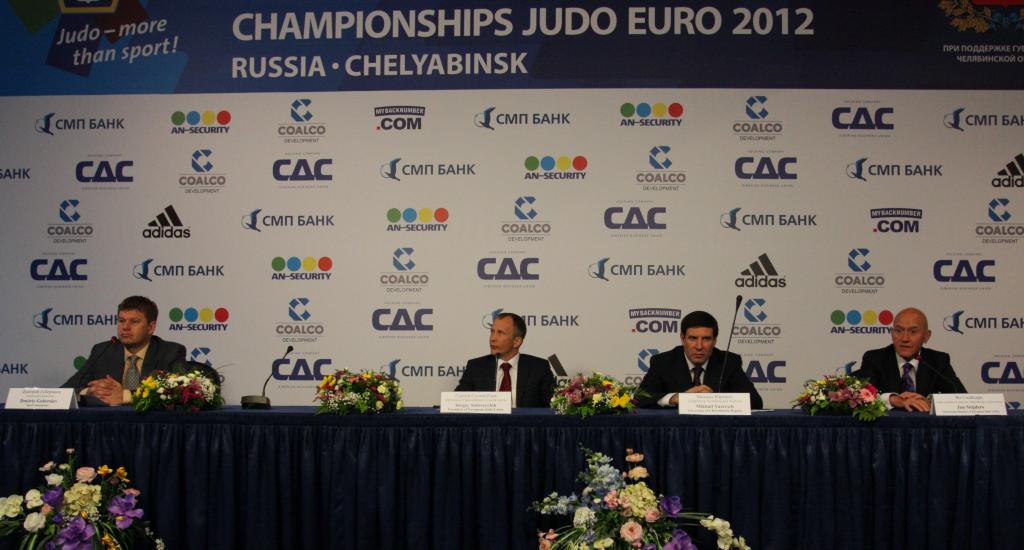 In the press centre of the of the Traktor venue a press conference was organised with Mikhail Yurevich, Governor of the Chelyabinsk Region and EJU President Sergey Soloveychik. Together with EJU Referee Director Jan Snijders they commented on the first day of the Championships in Chelyabinsk

Mikhail Yurevich, Governor of the Chelyabinsk Region
This being the last competition before the Olympic Games makes it a very important event. I think that the changes made to the arena are excellent. We have reconstructed some things to adapt the arena to different events. We have held many events in this arena and we’ve learned from this experience.

On Chelyabinsk hosting the championships
In the past Chelyabinsk was a closed city. Not many people know about Chelyabinsk. In order to make a name of ourselves, we focus on the development of sport. We want to host many different competitions and we want to have strong athletes.

On the judoka from Chelyabinsk
I have met our athletes. Judo is not a rich sport and the athletes do not earn as much money as in football or basketball. We support our athletes by granting them bonuses.

Sergey Soloveychik, President of the European Judo Union
The high level of this championship is the result of the common work of the team of the governor, the European Judo Union and the coaches. This competition should be the best organized Championship in history. I am happy that it takes place here in Russia. Not many countries can afford to hold an event at such a high level, and we are putting our hearts into it.

On the competition
The team even will be especially spectacular. As the European Championships are held before the Olympic Games, some stars are not taking part, but we still have some great champions competing such as Ilias Iliadis from Greece.
There are two aspects that make this event such a success. First of all a lot depends on the hospitality and we Russians are welcoming our guests warmly. We do care. When organizing such an event, there are always some kind of problems, but there was nothing that couldn’t be solved immediately. Secondly, to hold a competition at this level costs a certain amount of money. All our wishes have been fulfilled and there were no discussions who had to pay for what.

Jan Snijders, Refeering Director of the European Judo Junion
I congratulate the organizers of this event. The design of the judo hall looks great and the advertizing for the event is excellent. It is an honour for the referees to be here. I am sure that this will be the best ever as the preparation was super. The Russian Federation always prepares events at a high and professional level. I hope that the referees will do a good job and that in the end the real winner is the mat.

On the referees
There are 28 referees and seven of them have been selected to serve at the Olympic Games. These referees are not only the best in Europe but in the world.