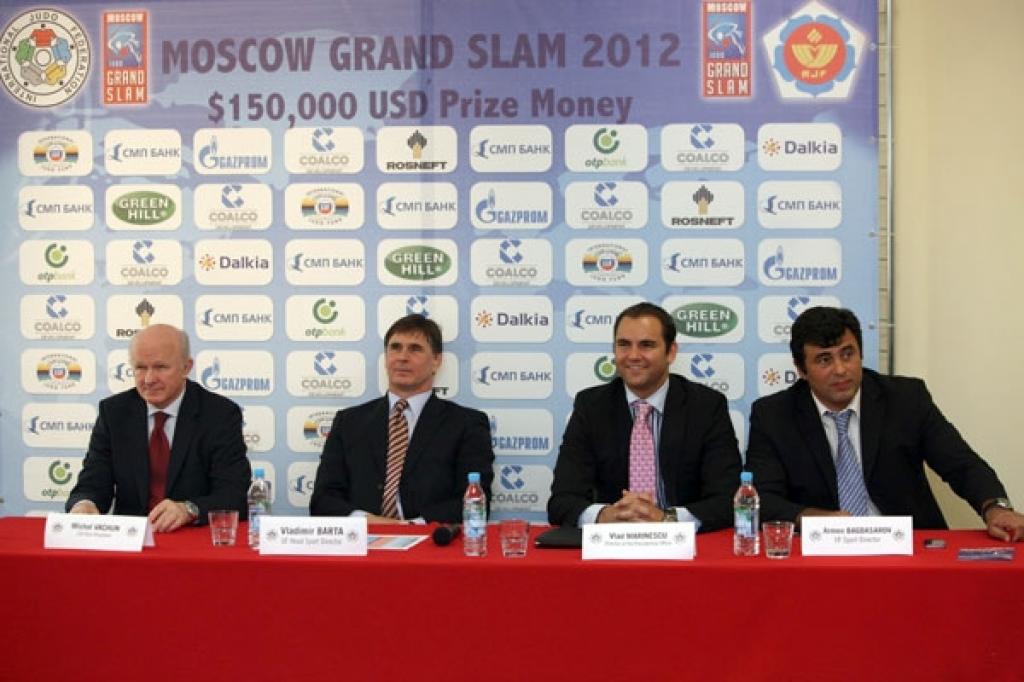 This weekend the strongest judoka of the world will gather in Zvenigorod to participate in the Grand Slam of Moscow. The competitions will be held on the platform of the recently launched Academy of Judo. The Russian tournament is one of the four Grands Slams organized every year by the IJF with a total prize money of US$ 154,000. This judo event has been held in the Russian Capital for more than 20 years and at every editions, it attacks more and more top level athletes.

At the official draw of the Judo Grand Slam, Moscow 2012, was conducted in the brand new Judo sports complex of Zvenigorod, just outside of Moscow, a centre which was inaugurated a few weeks ago by Vladimir Putin, the Russian President and Marius Vizer, the IJF president.
The press conference in Moscow was accompanied by EJU vice president Michal Vachun and EJU referee director Jan Snijders.

This year’s edition of the Grand Slam will definitely reach a very high level with 34 countries present and 165 fighters in men and women.
The Tournament, which has been existing for 20 years, has a special meaning this year, as Mr. Vasily Anisimov, the Russian Judo Federation President, underlined it: “This event is very special for us. It coincides with a big anniversary for Russian Judo: the 40th birthday of the foundation of the Russian Judo Federation. This tournament as a great historical significance for all fans of the Gentle Way in our country.”

An exciting event will be the women’s U48kg with many European contenders for the title such as Charline VAN SNICK (BEL) and Alina DUMITRU (ROU).
U52 van Snick’s compatriot Ilse HEYLEN (BEL) having also some good chances to enter the final block of the competition (WRL 14).

U57kg Corina Caprioiu (ROU), number 6th at the World Ranking List, is the favorite of the competition. U63kg Alice Schlessinger finally won a ticket to London, despite the beautiful silver medal won by Gerbi on the occasion of the recent European Championships. Schlessinger will be present in Moscow. Her main contestant will be Munkhzaya TSEDEVSUREN (MGL), 10th a the WRL.

The Slovenian, Rasa SRAKA, two times bronze medallist at the World championship, will be the European favorite of the competition on Sunday U70kg. Anett MESZAROS (HUN) will make her comeback.

Azerbaijan brings in Ilgar MUSHKIYEV in the men’s category U60kg, who is currently number 6 at the World Ranking List.

The U90kg category will be particularly followed here in Moscow as world number one and favorite of the public at the world level, Ilias Iliadis (GRE), will defend his last year title.

Read the complete preview for each weight category here:
http://www.intjudo.eu/News/cikk2208