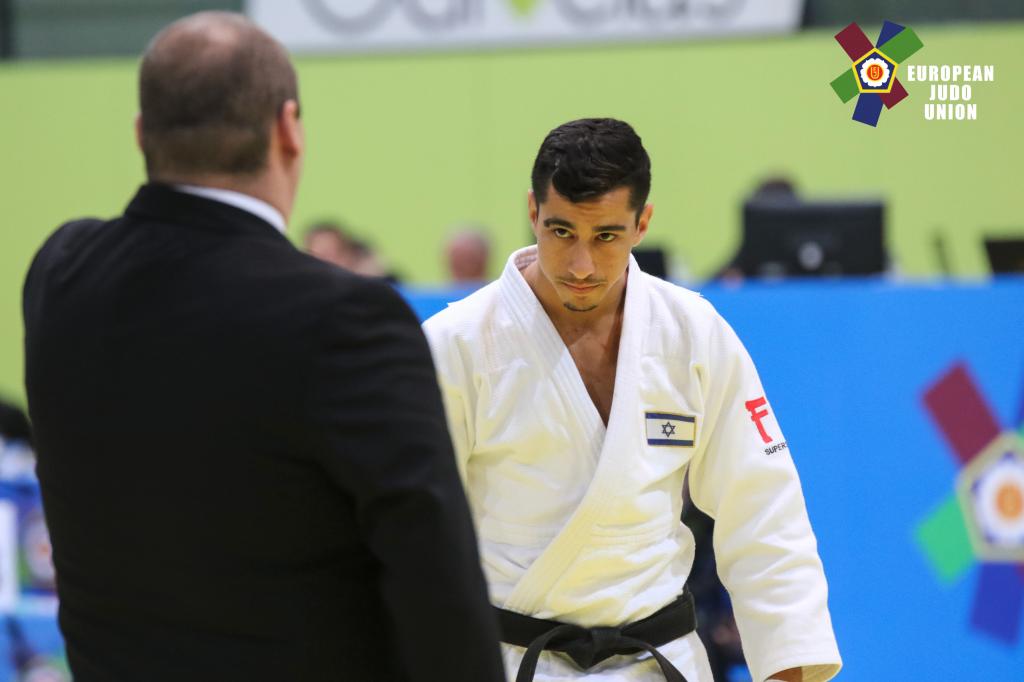 The -52 kg category is made of 25 athletes. You can push the seeding aside right away as glorious hidden names are on the list beneath. Starting with Polish tiger Karolina PIENKOWSKA; young, hungry and talented Anja STANGAR (SLO); long-time not seen triple World medallist and double European Champion, Andreea CHITU (ROU) and returning London 2012 Olympic Bronze medallist Rosalba FORCINITI (ITA). The latter will have to fill the shoe of Olympic Silver medallist, Odette GIUFFRIDA (ITA), who will be off duty next week. All unseeded athletes could be mixed first round with top seed, WRL #2, Rio 2016 Olympic Bronze medallist, triple World medallist and triple European Champion, Natalia KUZIUTINA (RUS). In absence of Olympic, World and European Champion, Majlinda KELMENDI, the focus will be on Distria KRASNIQI to retain the gold for Kosovo. For Israel, Betina TEMELKOVA and Gefen PRIMO will scrap through the day. Both, Charline VAN SNICK (BEL) and Amandine BUCHARD (FRA) are also considered medal hopes. 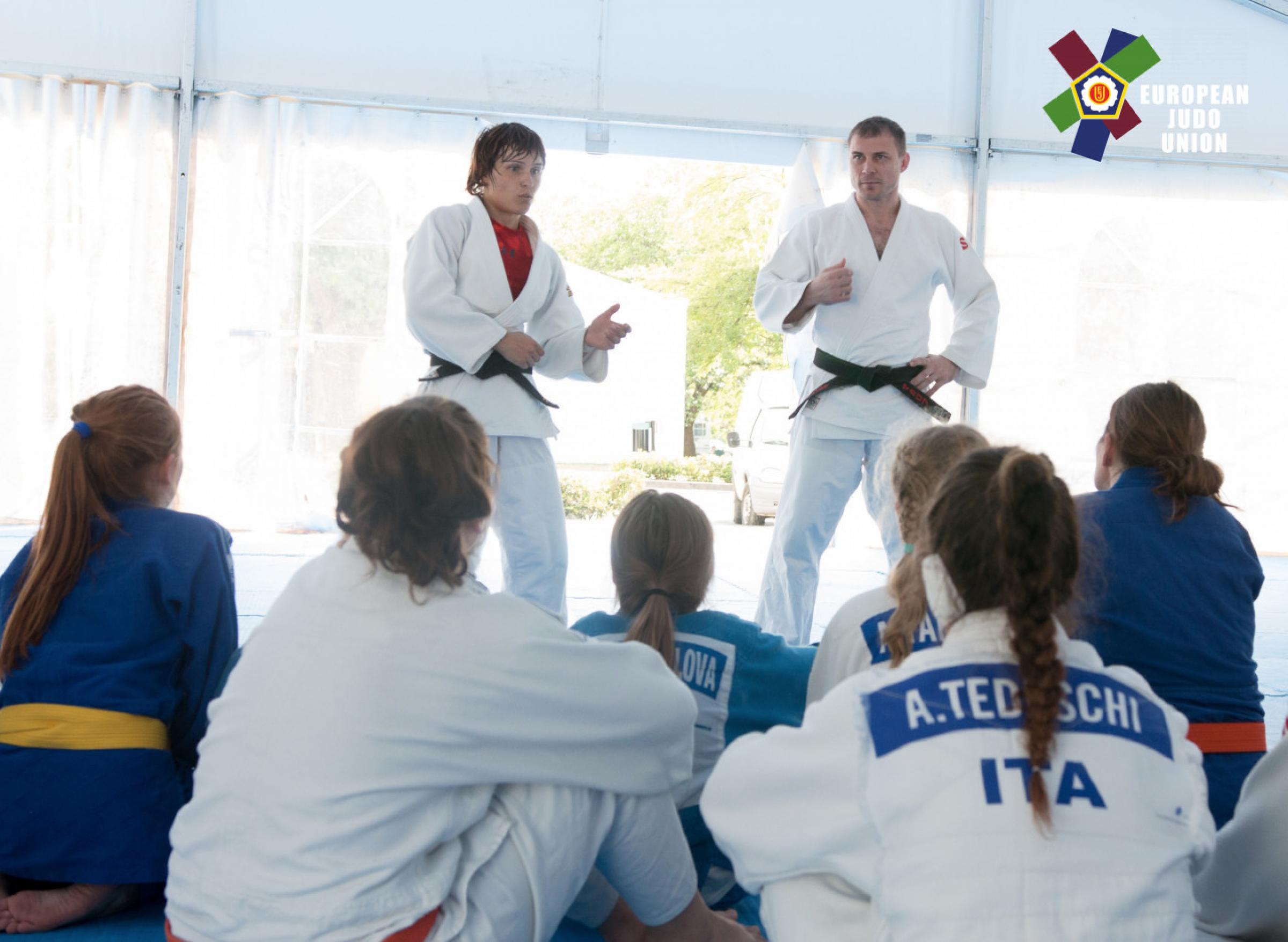 Olympic Bronze medallist, Natalia KUZIUTINA (RUS), coaching the next generation at the 2017 Judo Festival. In Tel-Aviv, she will be seeking to win her 4th European title. 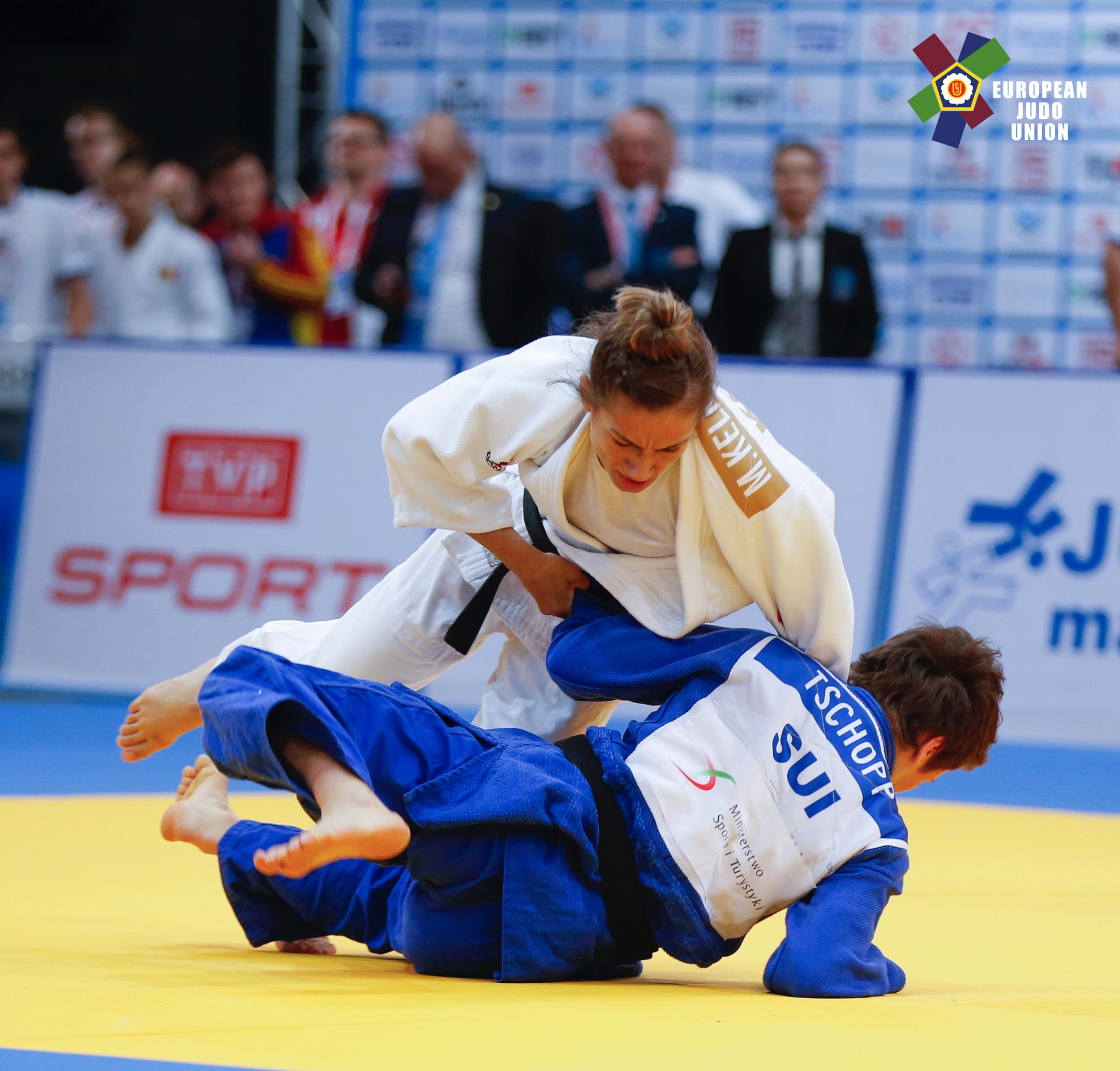 Olympic, World and European Champion, Majlinda KELMENDI (KOS) will not be participating next week. However, surely, she will be supporting her team-mates. 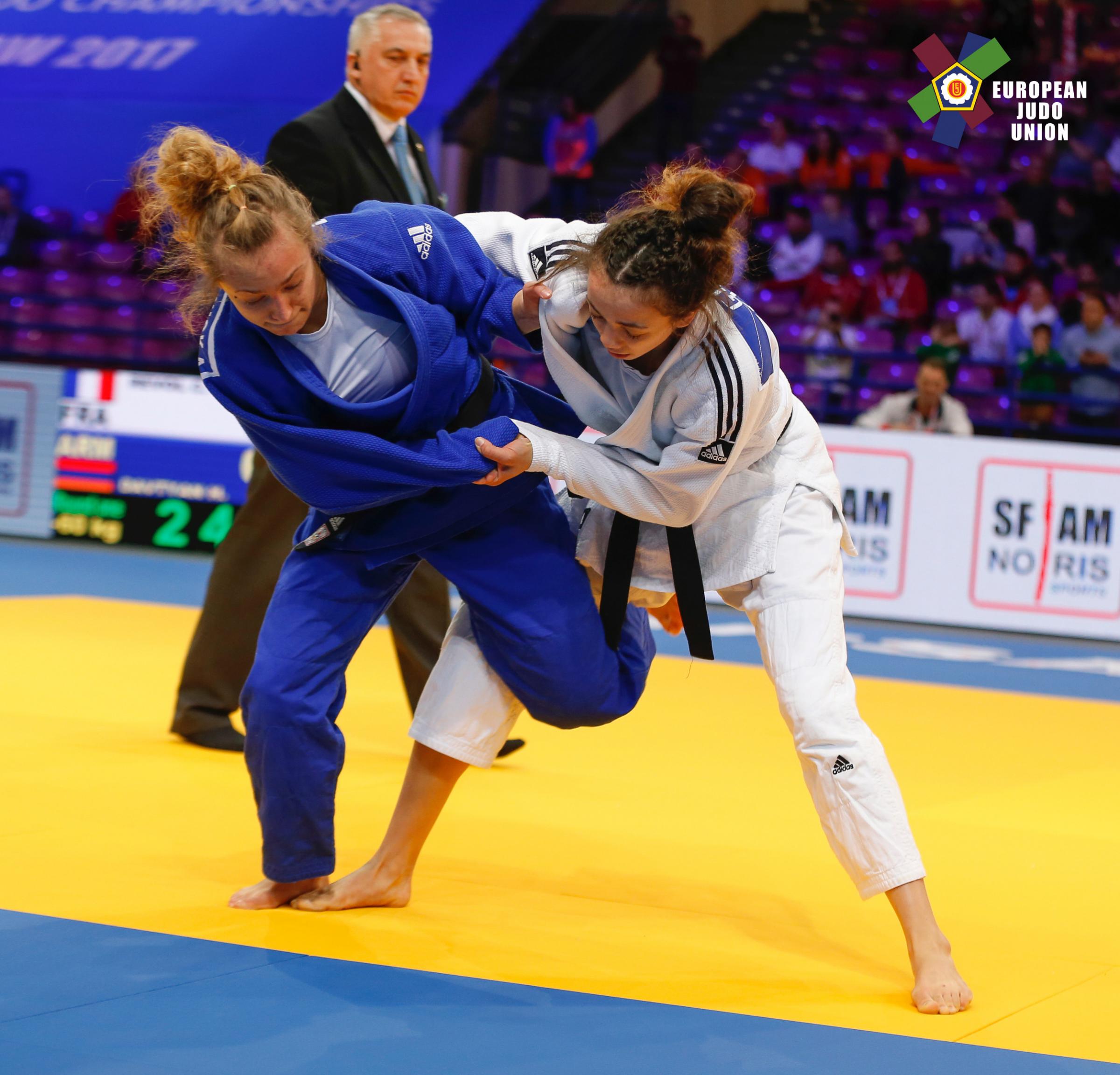 Never underestimate the Polish tiger, Karolina PIENKOWSKA. Many of us will be eager to see what she has to offer in Tel-Aviv next week. 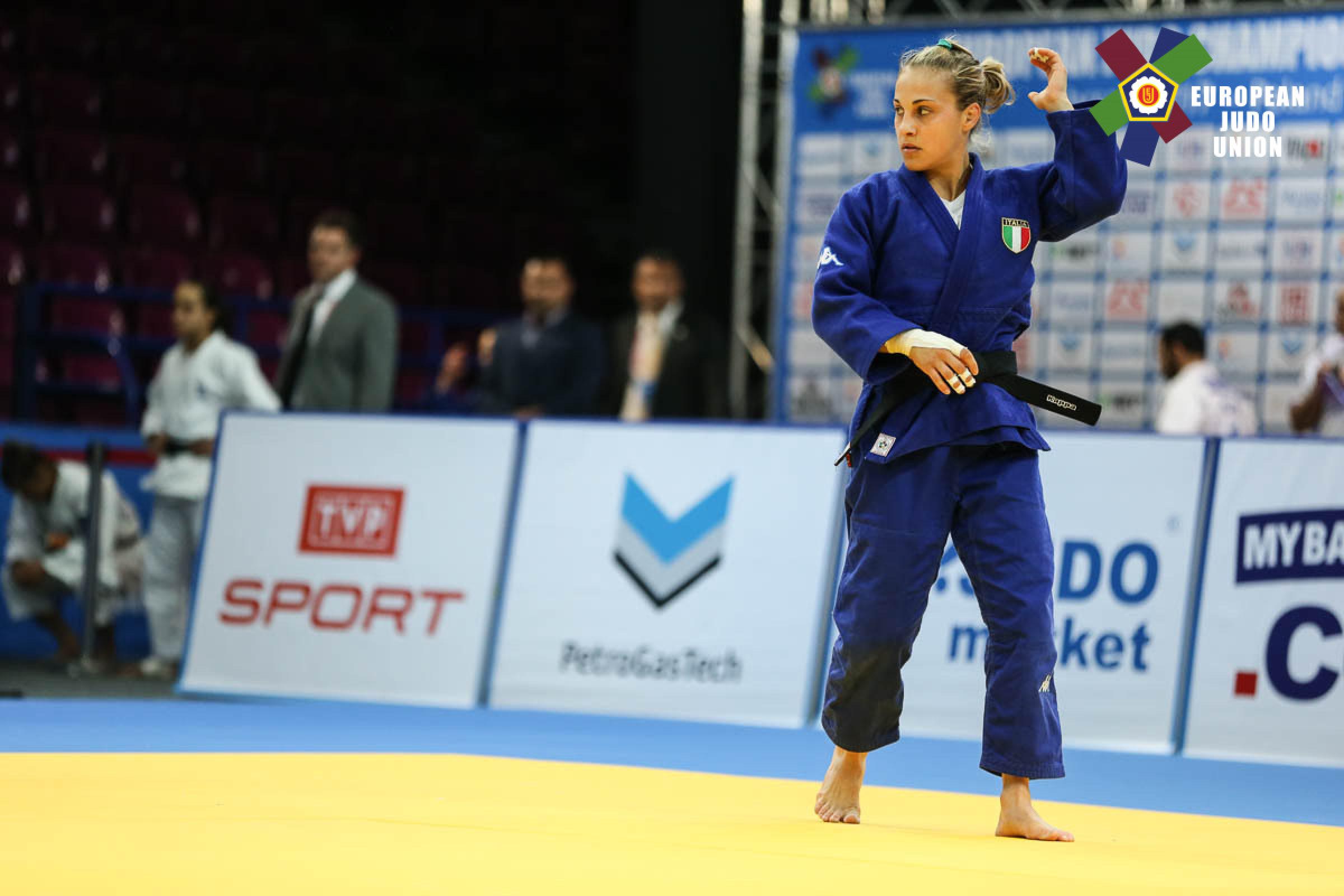 Olympic Silver medallist, Odette GIUFFRIDA (ITA) is also not competing in Tel-Aviv. Instead, another Italian Olympic medallist will aim to replace. 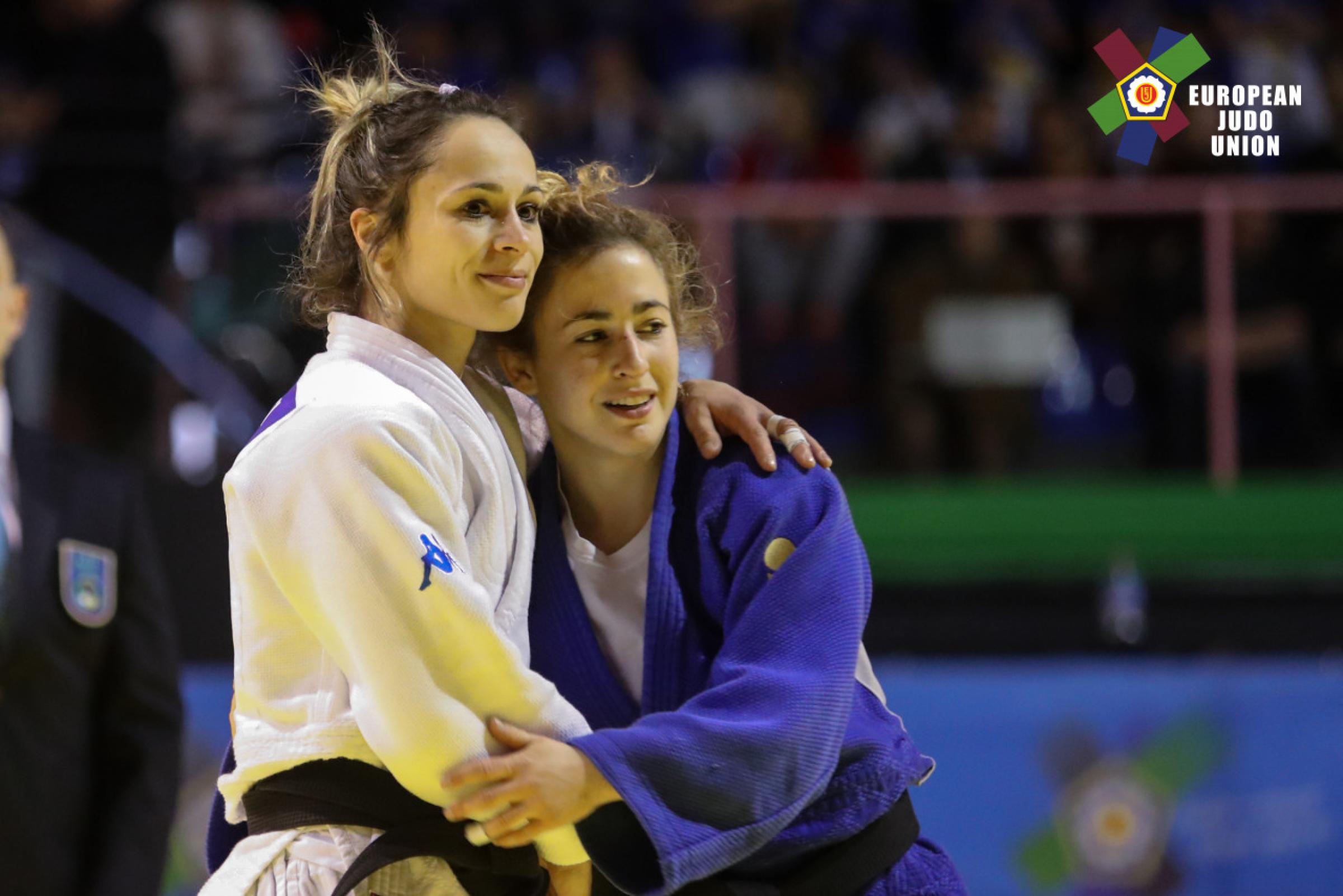 London 2012 Bronze medallist, Rosalba FORCINITI (ITA) will have to fill the shoe of Odette GIUFFRIDA. After a long break and two beautiful children, she returns to mix with the elites, 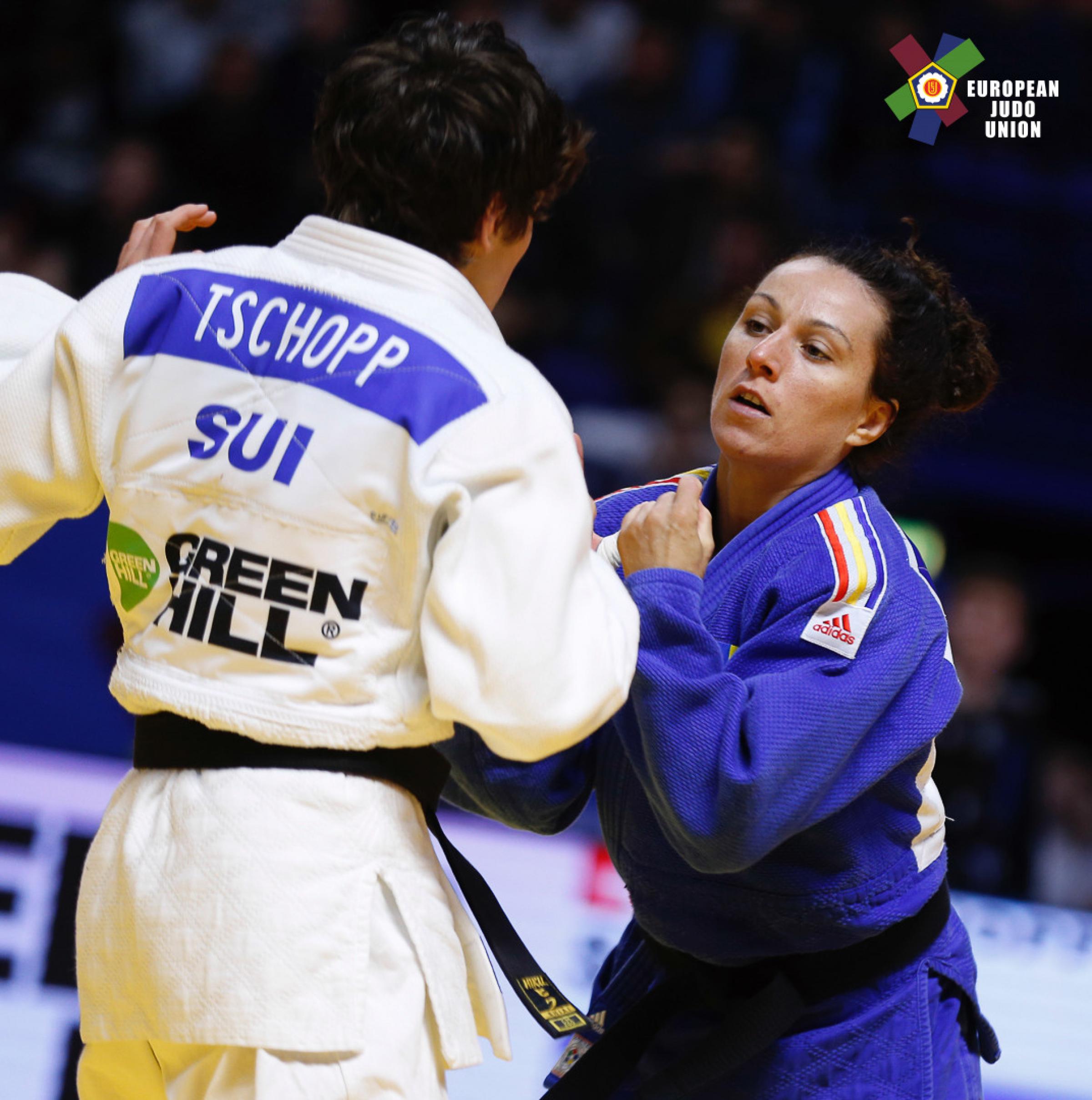 Long-time not seen triple World medallist and double European Champion, Andreea CHITU (ROU) is also back in the game. 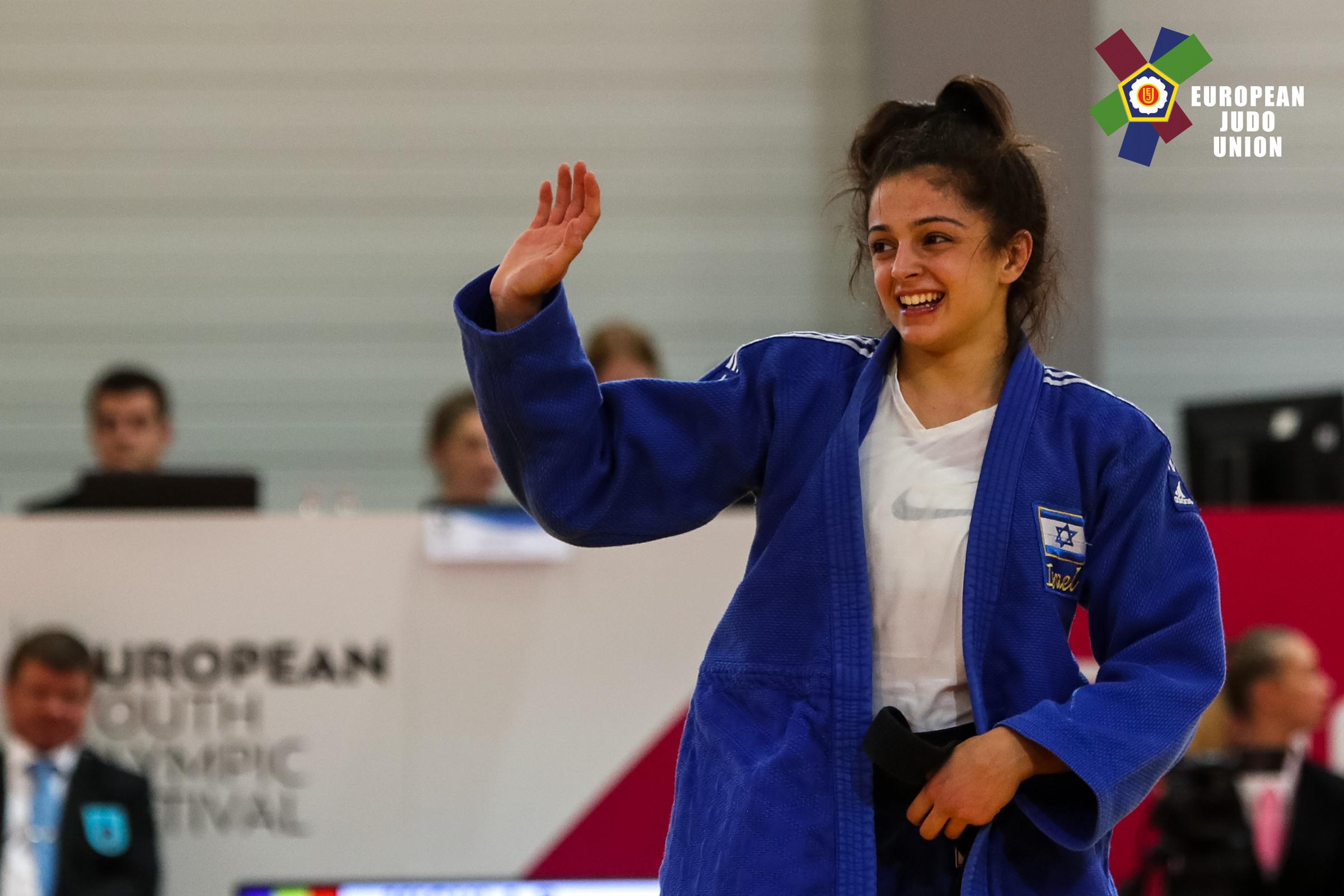 Less than a year ago, Gefen PRIMO was celebrating her EYOF victory. Since, she won Junior European as well as Senior European Judo Open medal. It is certainly not going to be an easy ride for her in Tel-Aviv, yet, a young spirit and a pinch of home crowd can make the magic. 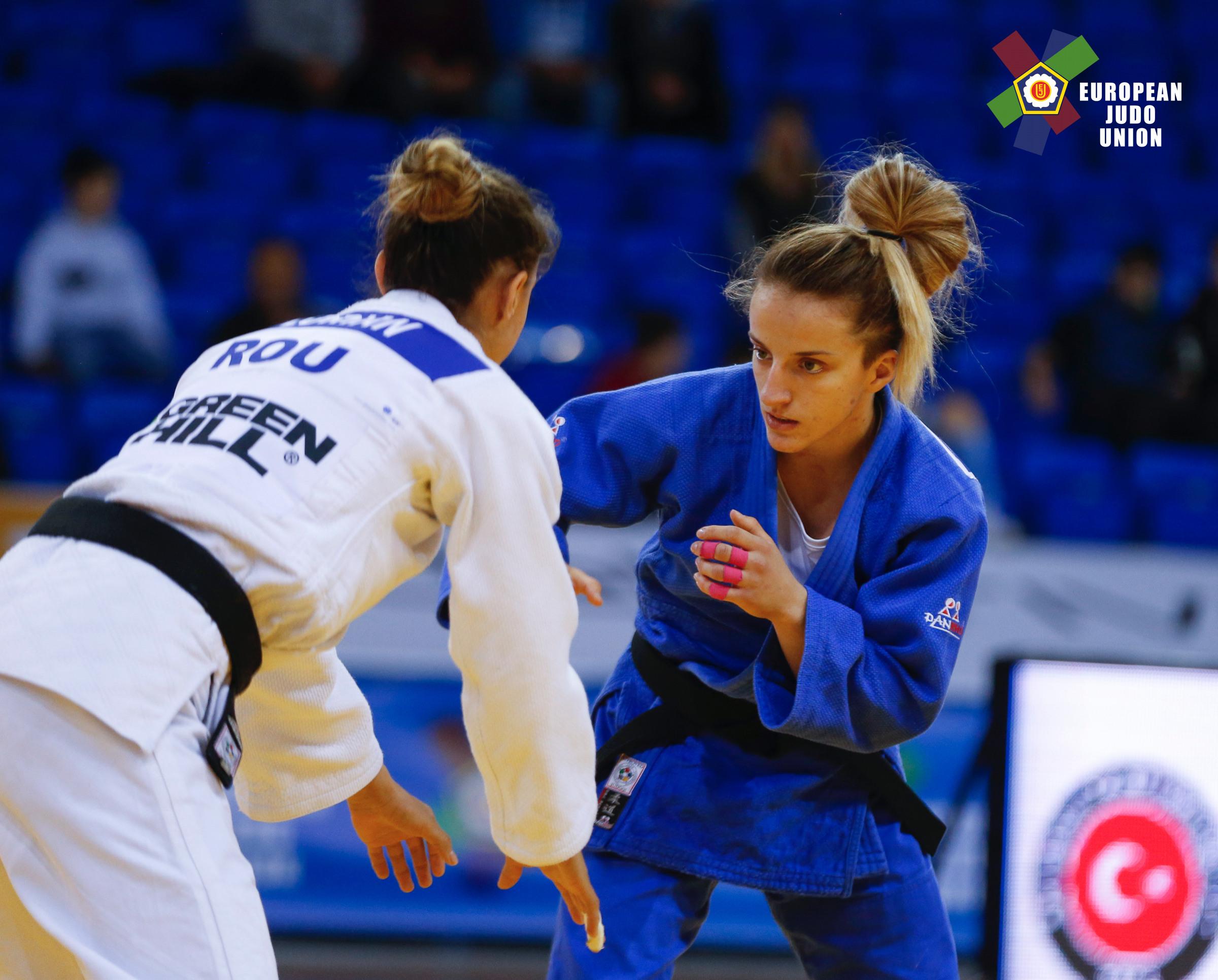 The focus will be on Distria KRASNIQI to retain the gold for Kosovo. 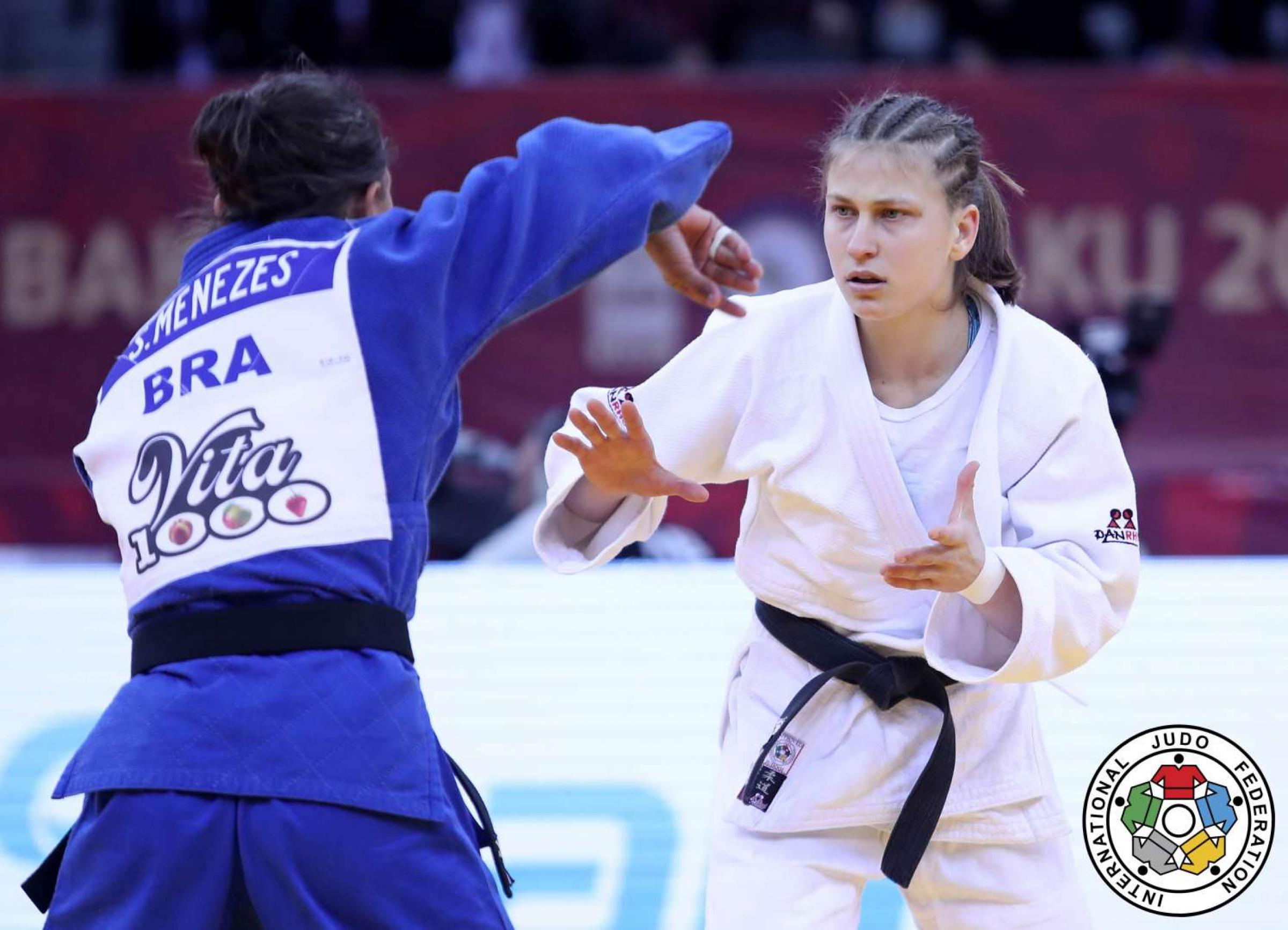 Young, hungry and talented Anja STANGAR (SLO) is amongst the 25 athletes entered in the -52 kg weight division. 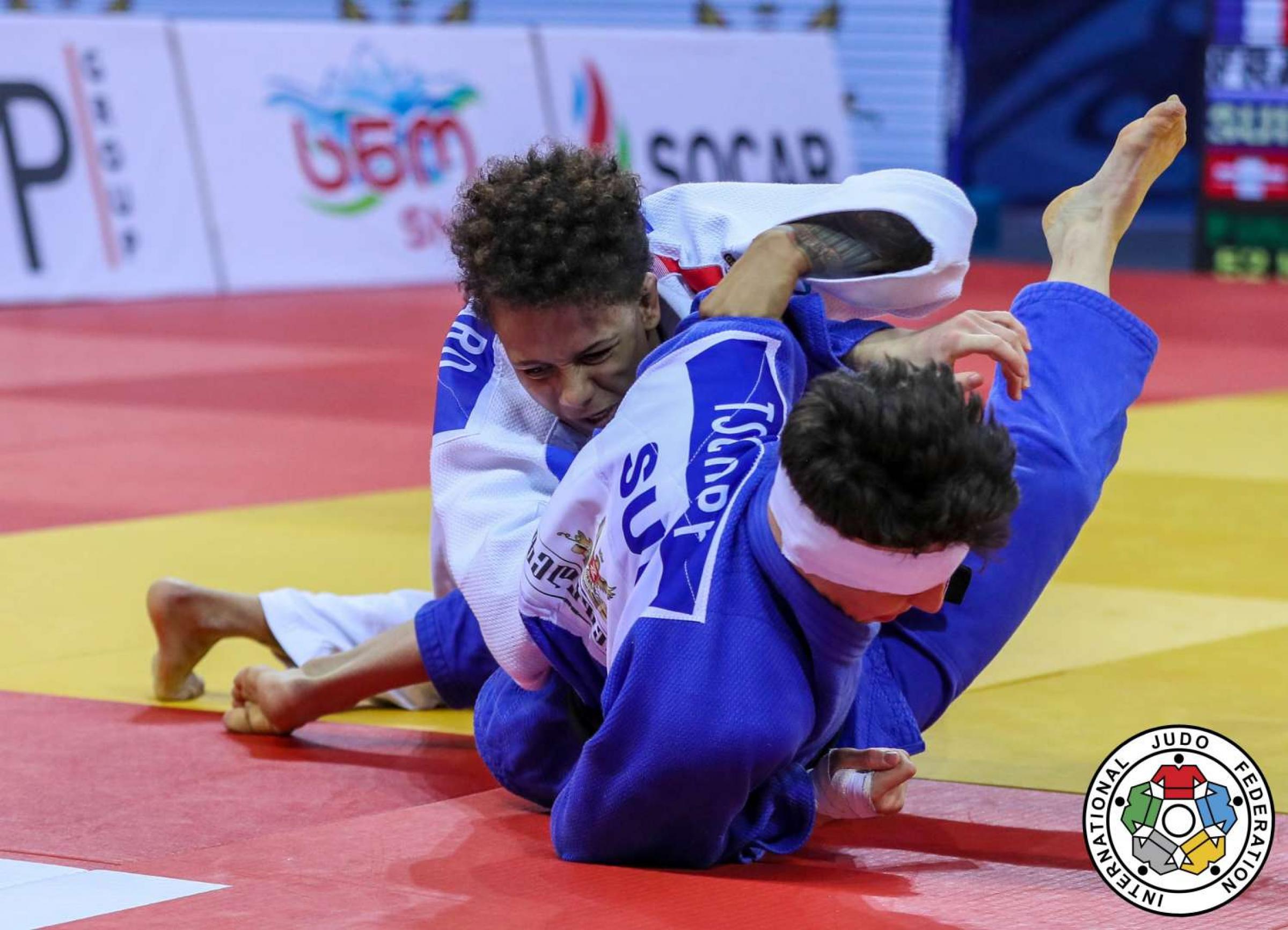 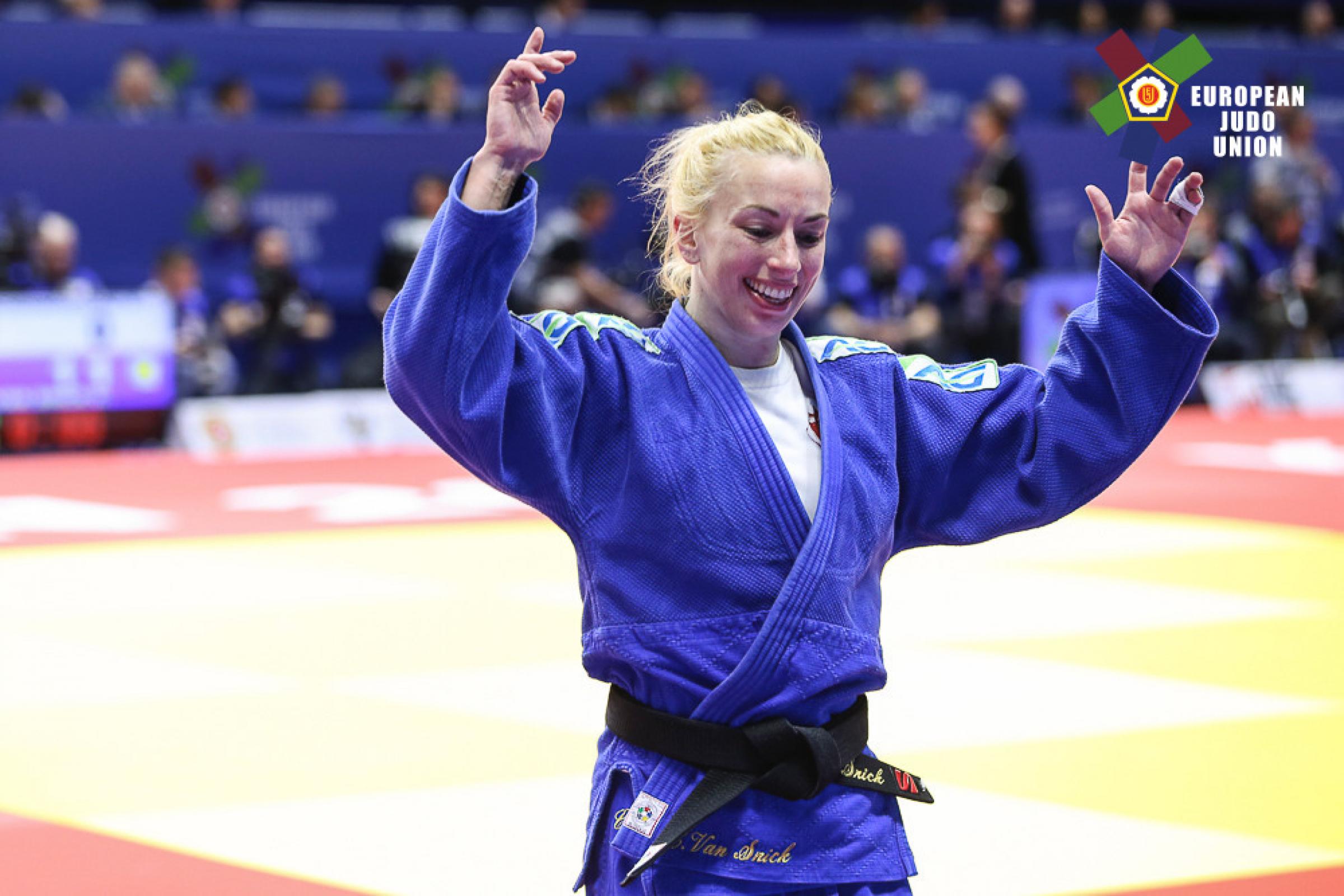 Charline VAN SNICK (BEL) won prevous European titles, yet, at a lower weight division. Undoubtedly, she fast adjusted to the -52 kg category. Can she top it with a fresh European title? 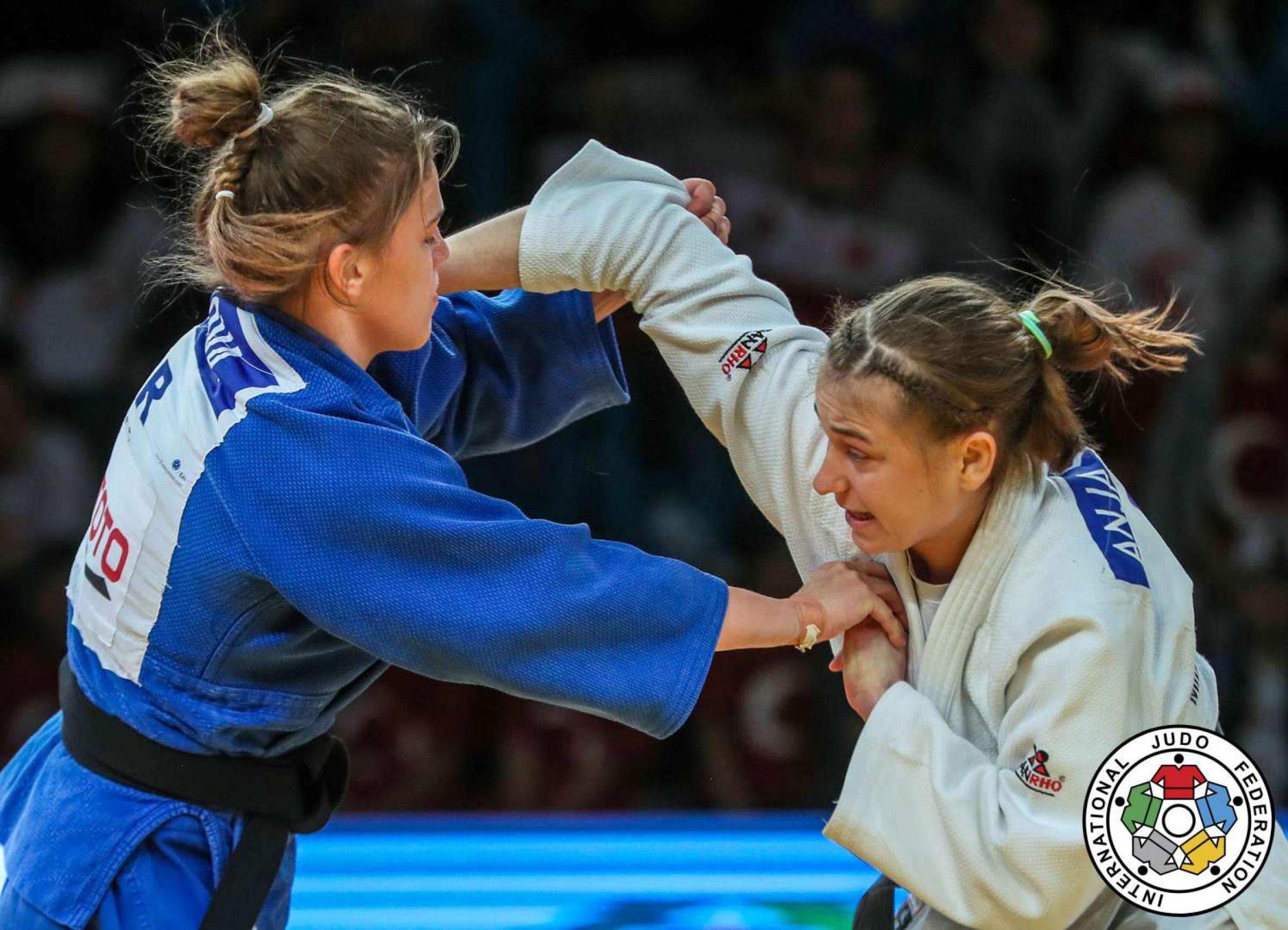 Betina TEMELKOVA (in blue) will be shining the flag for Israel next week as she scraps her way through in the -52 kg category.

Convincing views for the host nations

The total number of 31 athletes are listed in the -66 kg category with the cream being spread amongst top 8 seed. Israel could look forward to a double celebration in this weight division as both, World Bronze medallist, Tal FLICKER and U23 European Champion, Baruch SHMAILOV knows what it takes to top the podium. Current title holder, Georgii ZANTARAIA (UKR) will have the opportunity to triple his European titles. Who is there to stop him? Would that be top seed, WRL #2 and 2016 European Champion, Vazha MARGVELASHVILI (GEO)? Or perhaps Russia’s Yakub SHAMILOV? Slovenia’s silver man, Adrian GOMBOC is also amongst the top 8. Off to top chart, yet very hazardous, Denis VIERU (MDA) will definitely be your underdog to keep an eye on. 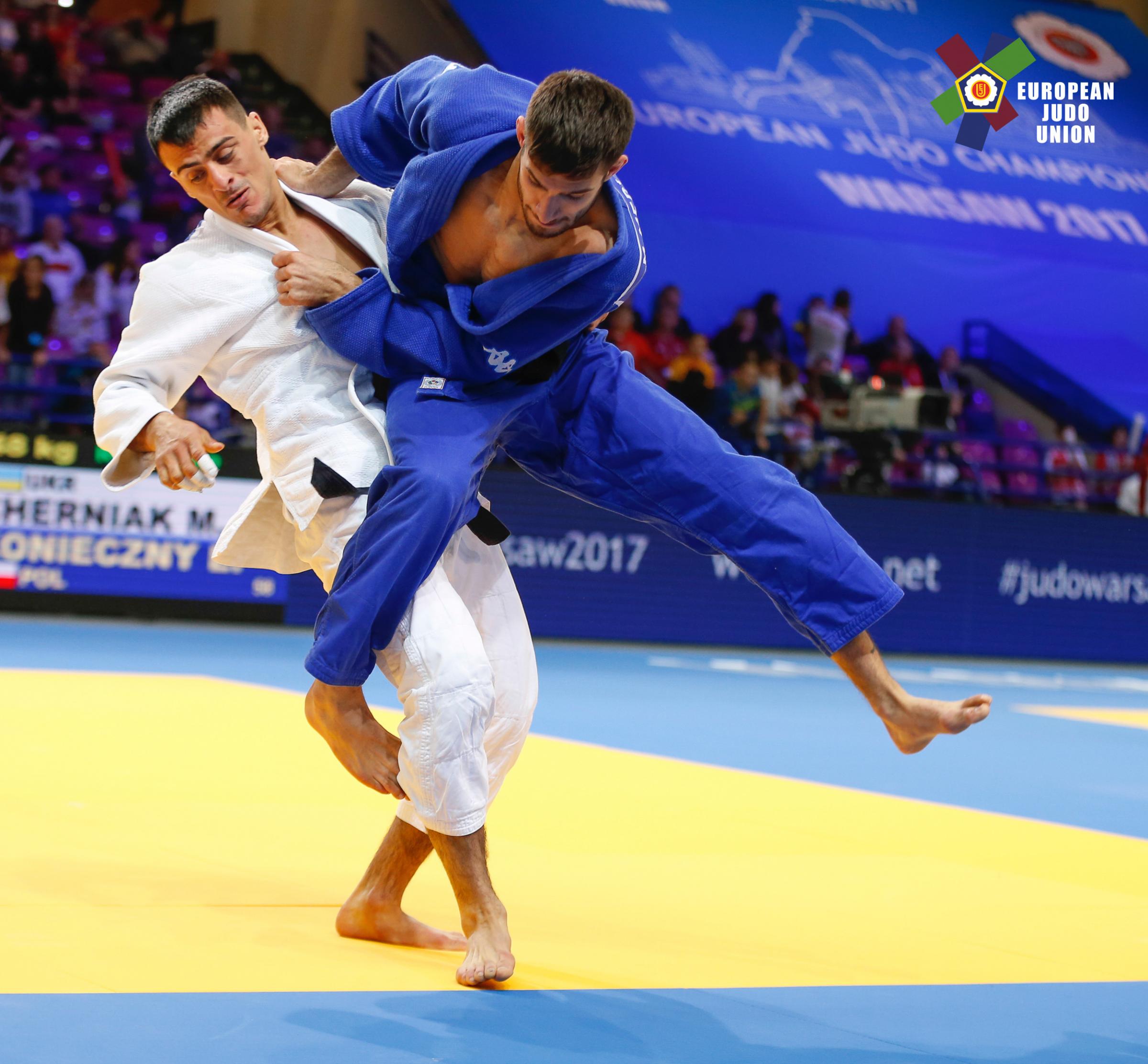 Current title holder, Georgii ZANTARAIA (UKR) will have the opportunity to triple his European crowns. 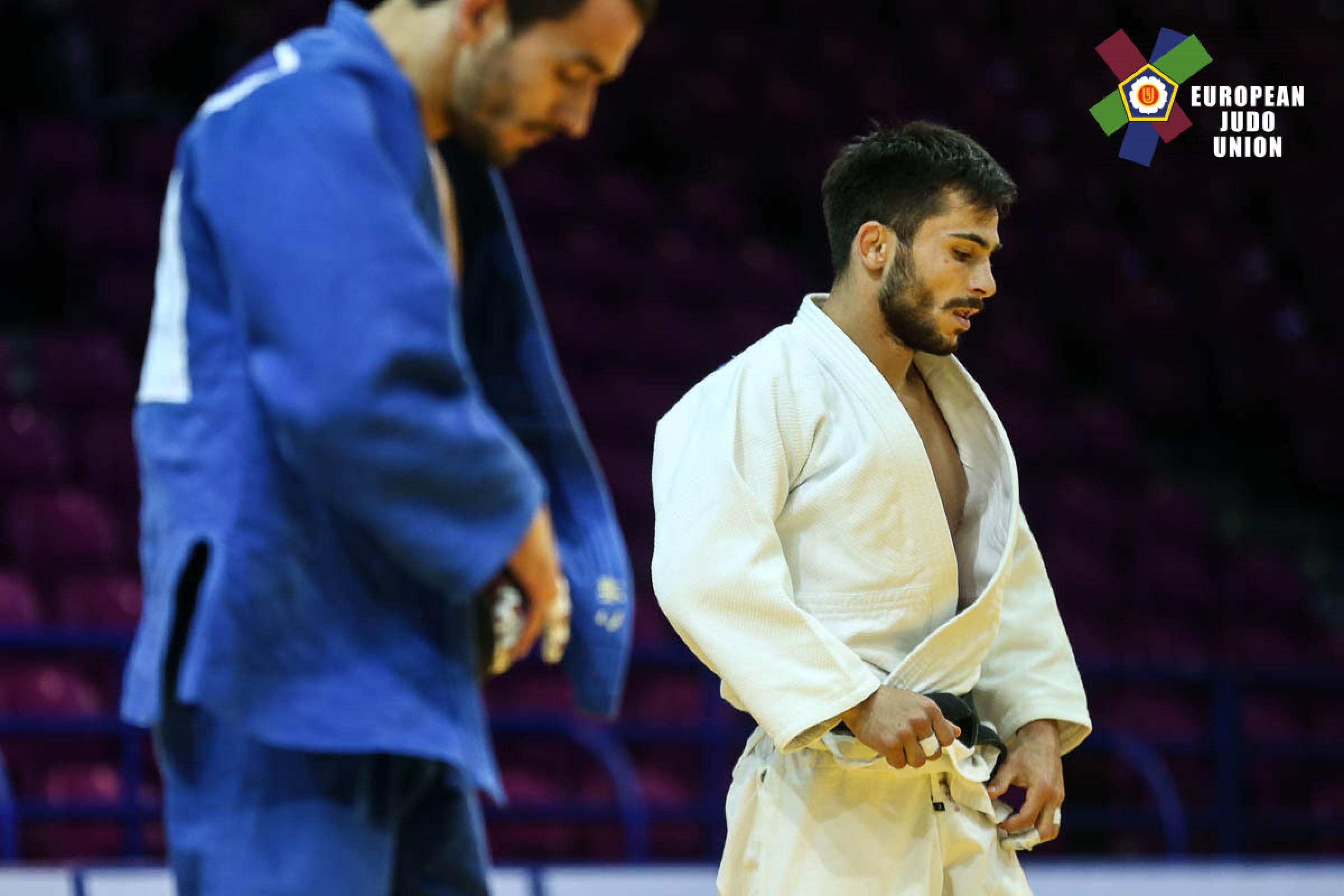 2016 European Champion, Vazha MARGVELASHVILI (in white) is the only athlete entered for Georgia in the -66 kg category. He did it 2 years ago, can he do it all over again? 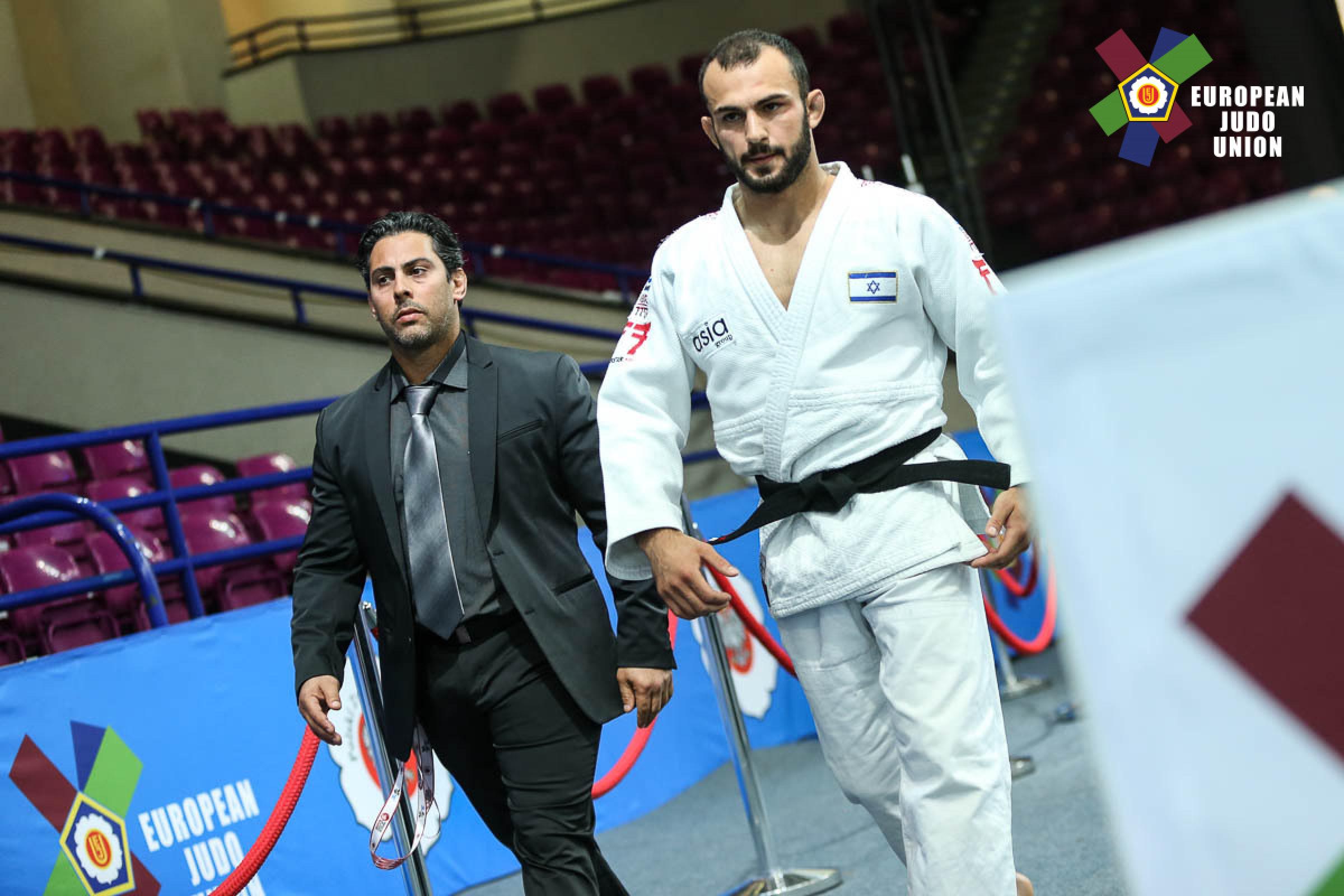 U23 European Champion, Baruch SHMAILOV knows what it takes to top the podium. In this particular weigh class, the host nation has a lot to look forward to. 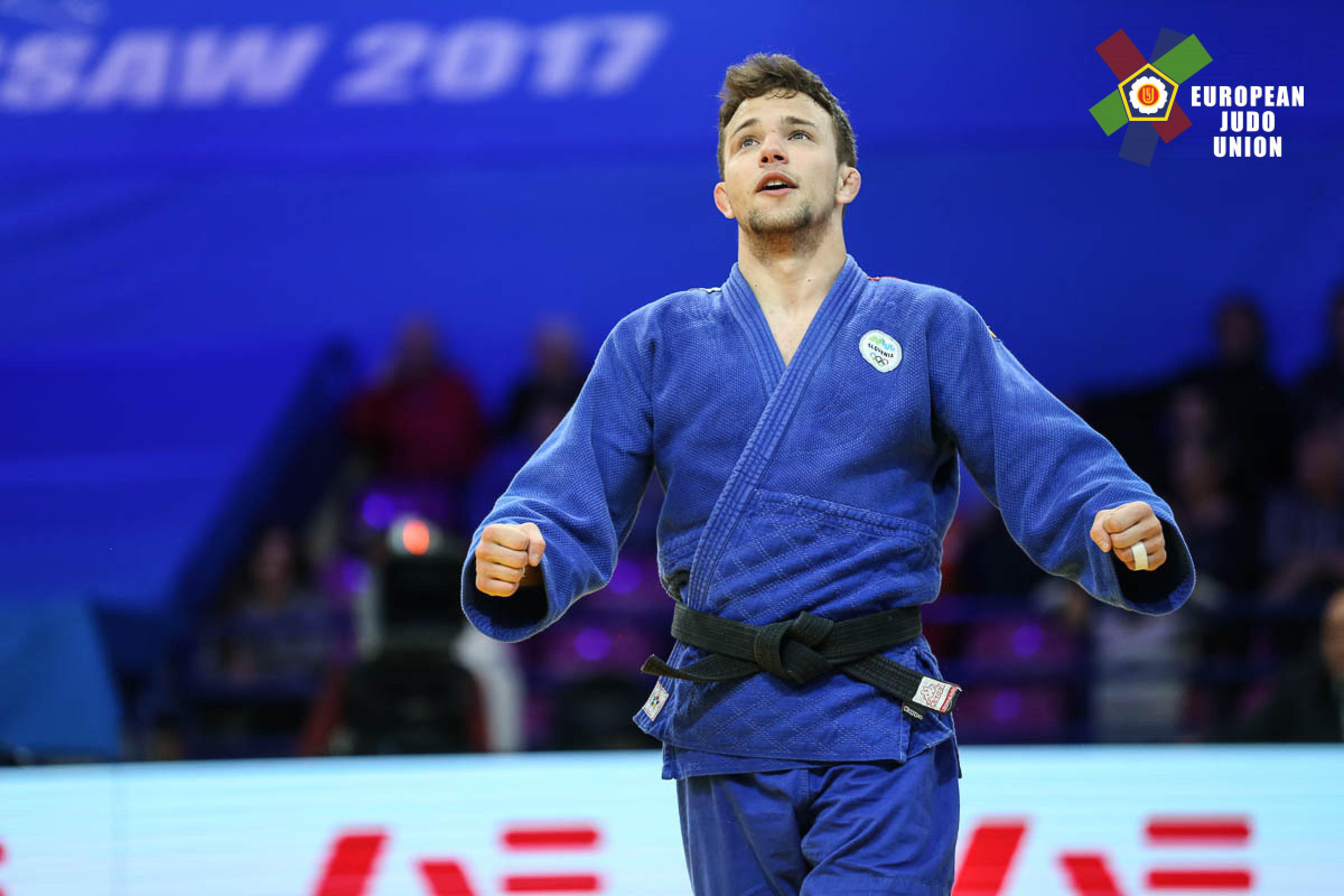 Slovenia’s 2017 silver man, Adrian GOMBOC is also amongst the top 8 seeded athletes. Can he top his result from last year? 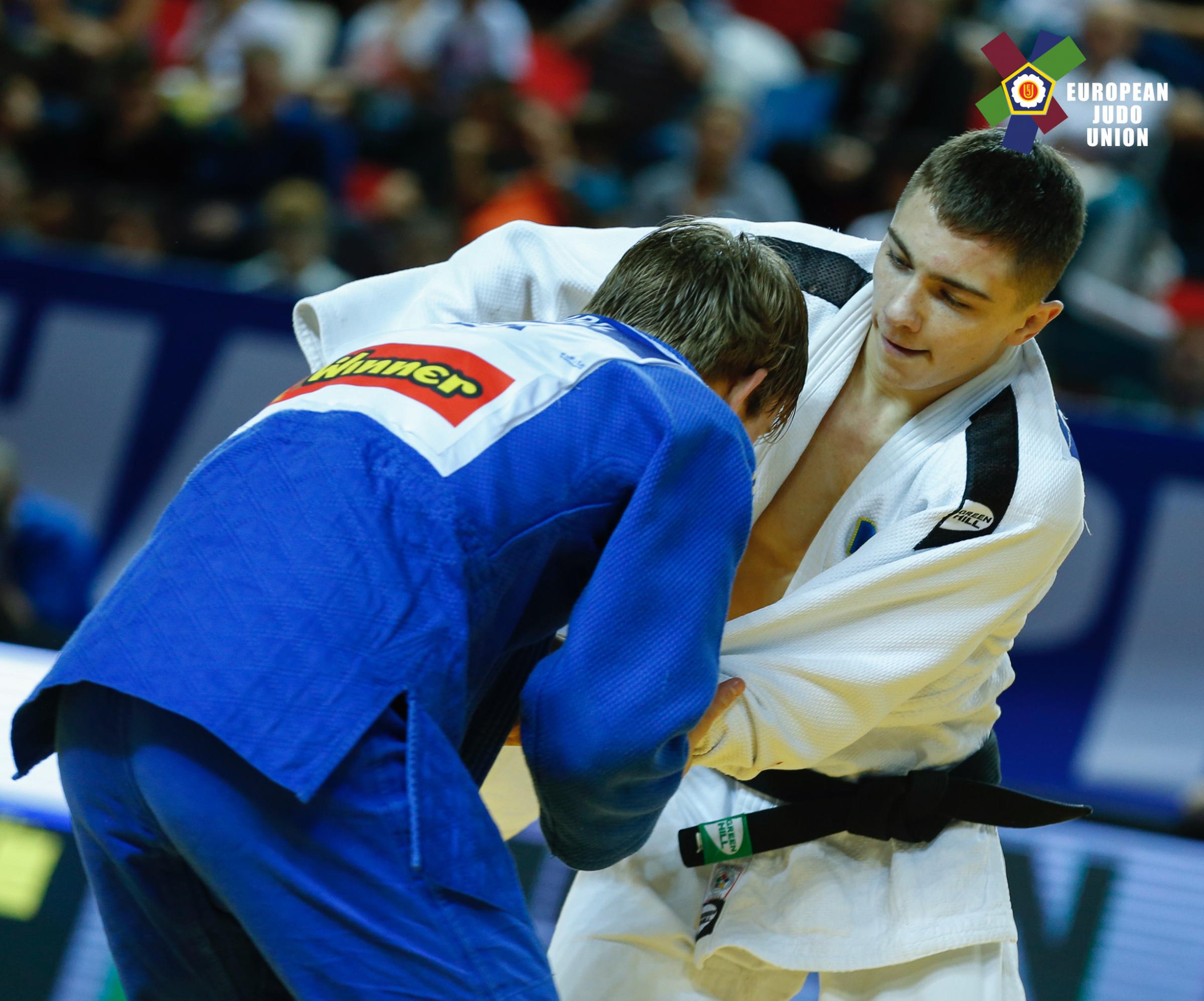 Off to top chart, yet very hazardous, Denis VIERU (MDA) will definitely be your underdog to keep an eye on. He won the U23 European title two years ago in Tel-Aviv. 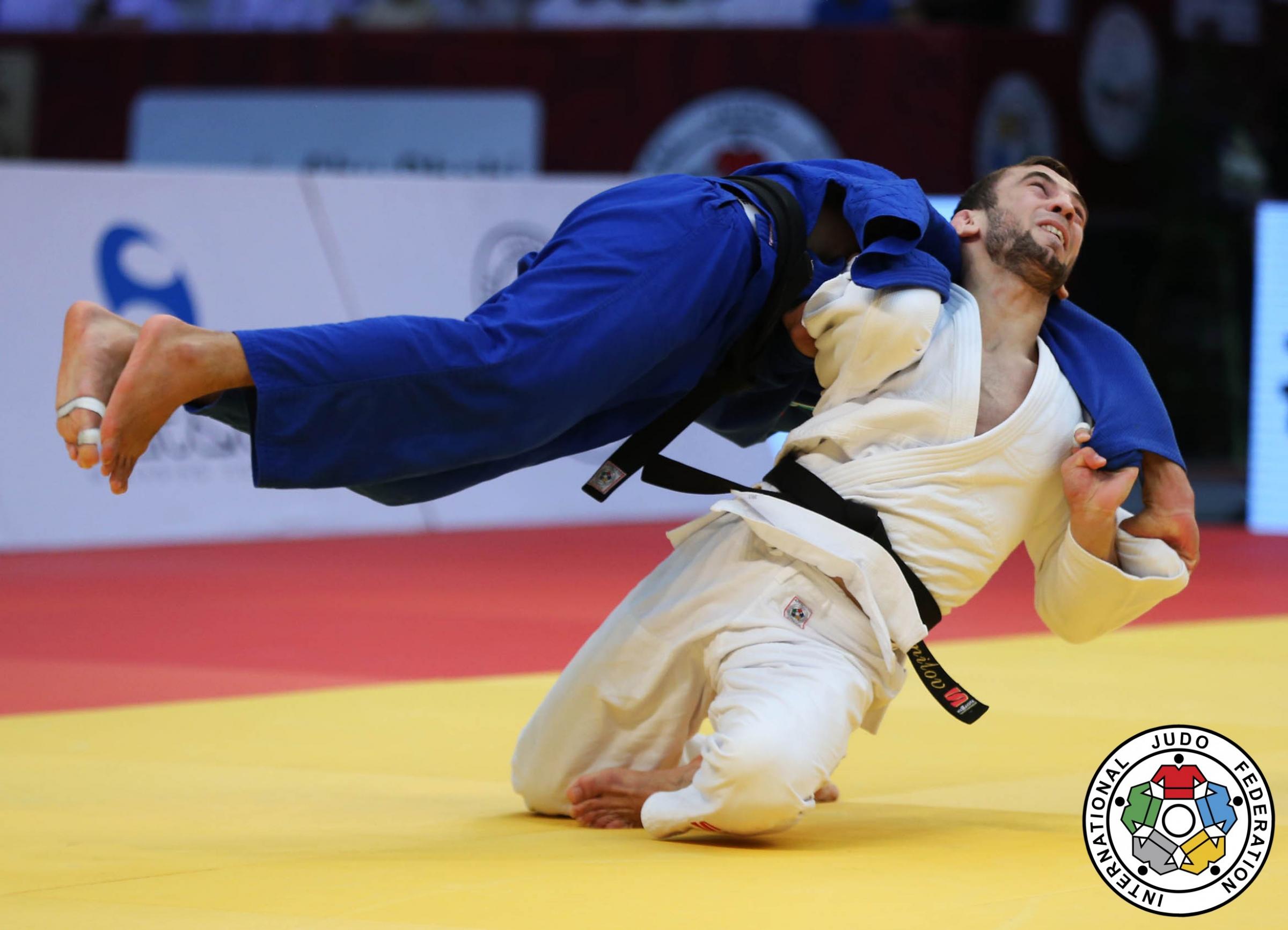 Yakub SHAMILOV will be on a solo mission for Russia in the -66 kg category. 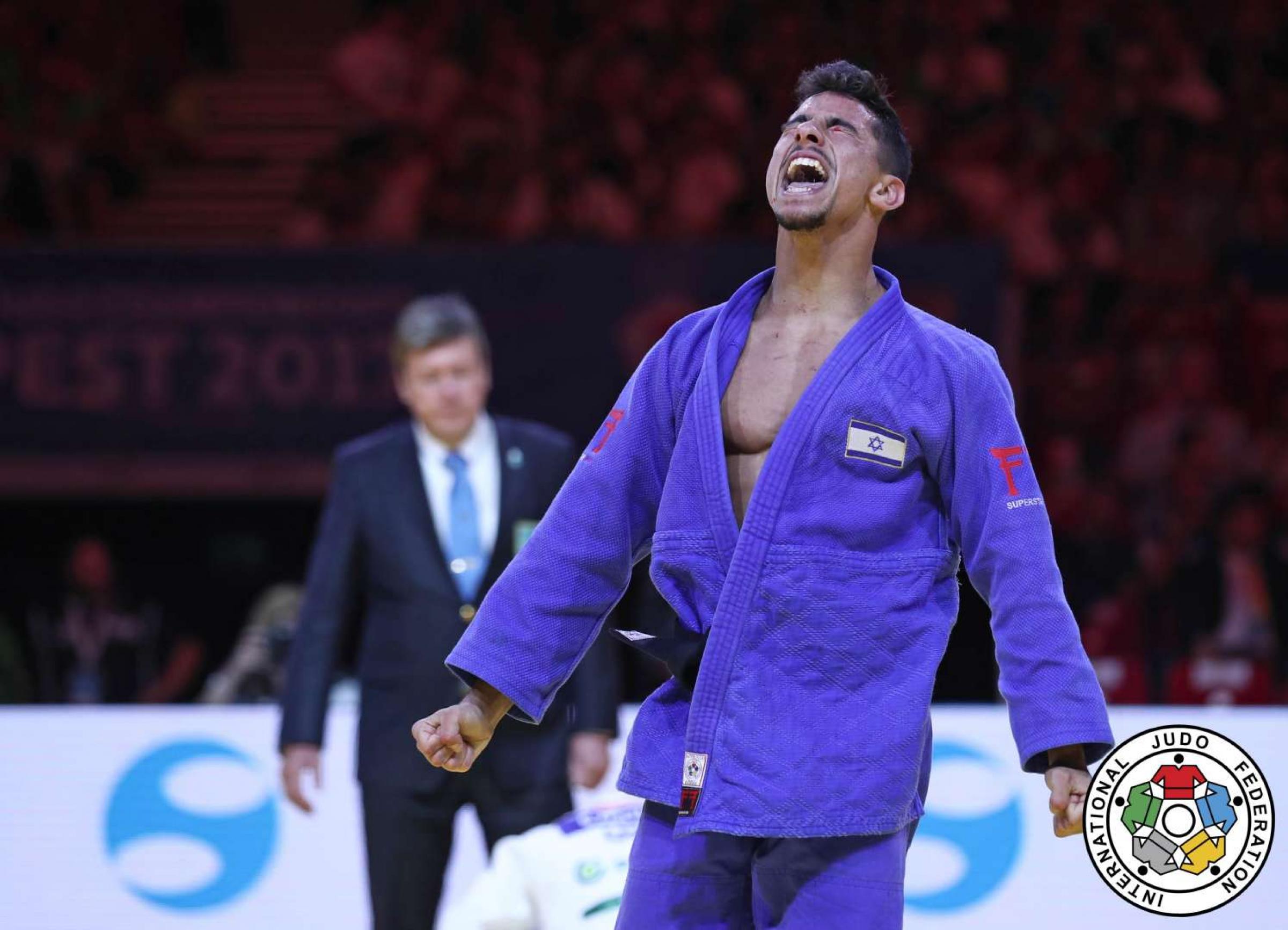 World Bronze medallist, Tal FLICKER could be the real deal for Israel on the opening day of the championships.

To help us out with some tips for the two weight categories mentioned above, we have asked World Bronze medallist and European Games winner, Kamal Khan-Magomedov as well as Olympic, World and European Champion, Majlinda Kelmendi  to share their top picks with us ahead of #JudoTelAviv2018. 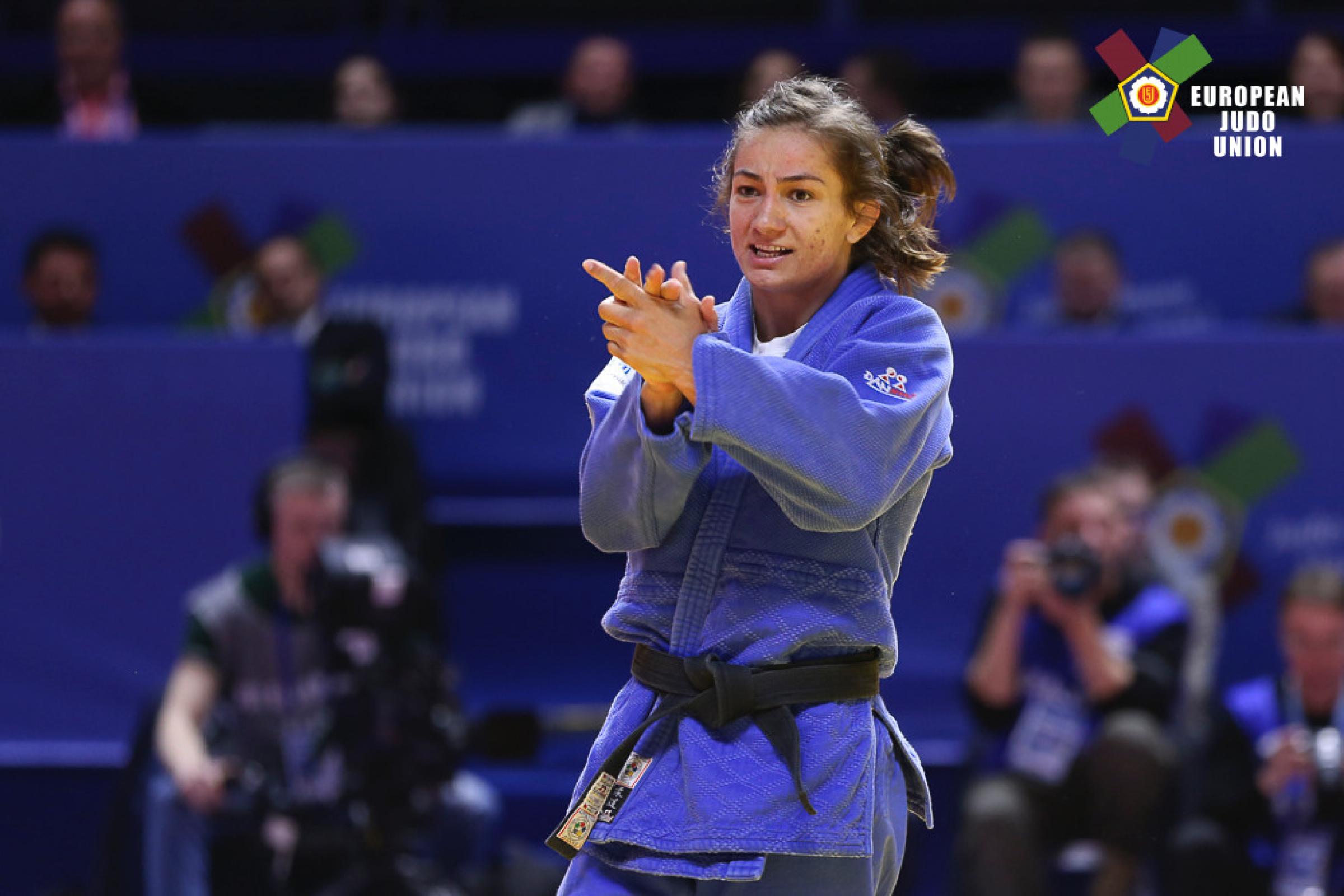 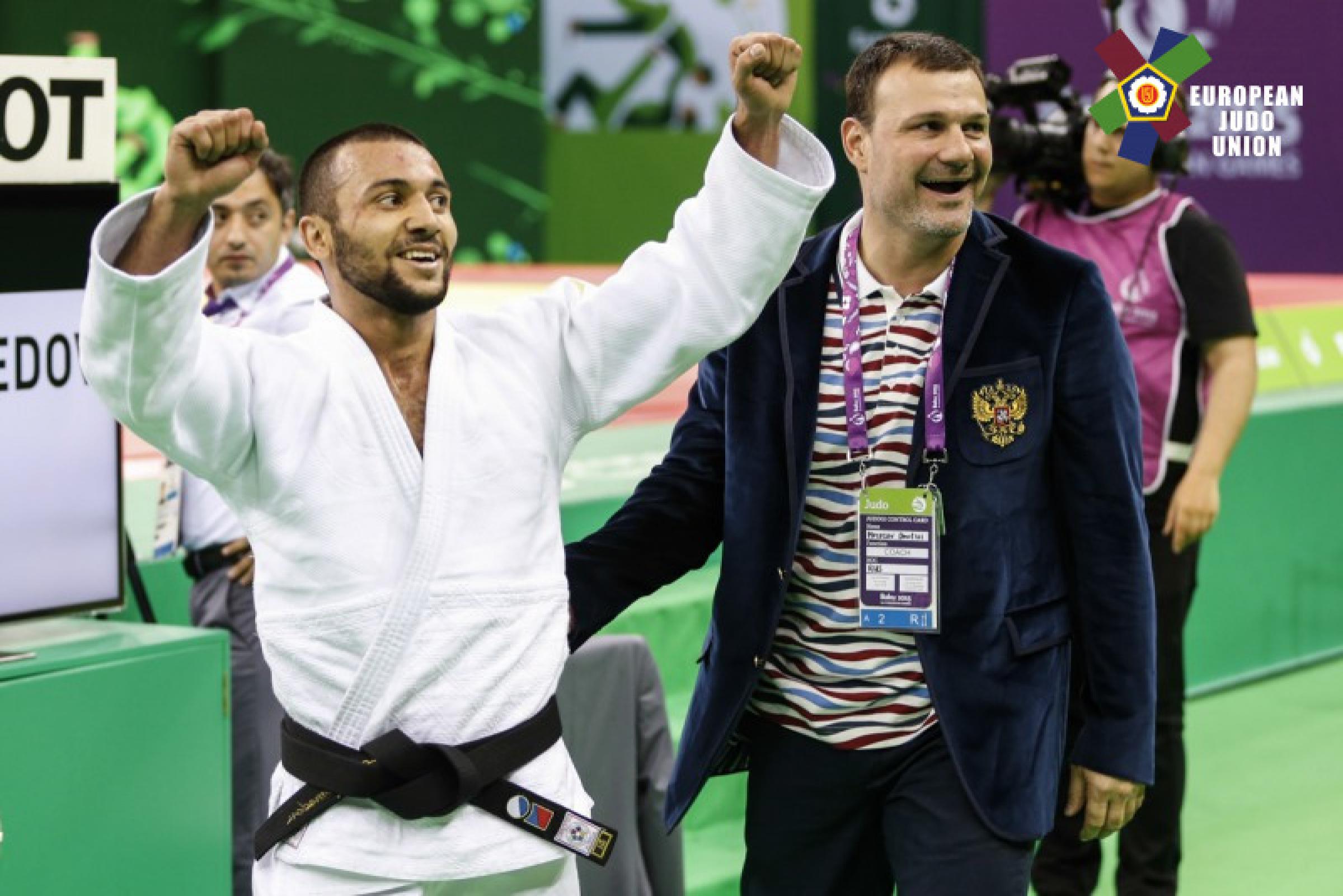