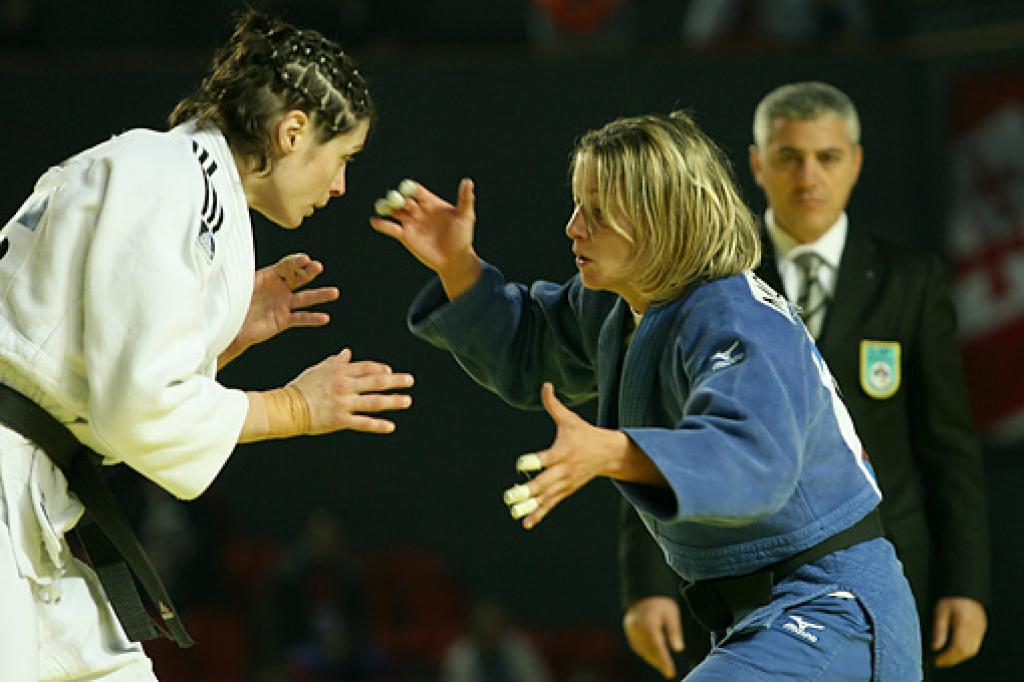 When Giulia Quintavalle (ITA) won the Olympic competition in 2008, she came from out of nowhere, having never won a major international tournament before her Olympic gold.

Her victory says everything about how small the differences are in top level international judo.

Added to that, the U57kg weight category at the Rotterdam World Championships does not have a clear favourite, which makes the competition even more fascinating this year.

Sarah Clark (GBR) beat Quintavalle twice this year after moving into the category from the U63kg class. In Tbilisi at the European Championships she finished second behind Telma Monteiro (POR).

Monteiro, the triple European champion (twice in 52kg and once in 57kg) is also showing great strength in her new category. In the U52kg category she had won two World Championships medals, a bronze in 2005 and silver in 2007 behind Junjie Shi (CHN).

Monteiro switched divisions in June 2008 and started with a victory at the World Cup in Bucharest, before winning three World Cups, the Grand Prix of Hamburg and then the Grand Slam of Rio. But this year she has lost twice in major events, both against Kaori Matsumoto (JPN).

Matsumoto, however, also lost to Monteiro in Hamburg this year, so they have shown there is little between them as favourites for the competition.

Morgane Ribout (FRA) made the final in the Grand Slam of Paris in February where she lost to Ioulietta Boukouvala (GRE), then caused a surprise when she won the bronze medal at the European Championships.

Marlen Hein (GER) won the World Cup in Belo Horizonte, as well as the Swiss Open, but both were against a limited quality field. Having said that, in 2008 she did beat a number of world championships participants here in Rotterdam, finishing second at the Super World Cup: Olena Sayko (UKR), Joliane Melancon (CAN), and Irina Zabludina (RUS), and this year she beat Liraz Ben Melech (ISR).

Olympic runner up Deborah Gravenstijn (NED) just turned 35 last week and is by far the oldest of the participants in this class. She won two Olympic and two world championship medals and has the capacity to peak at the right moment.

Yurisleidis Lupetey (CUB), world champion in 2001 in the final against Gravenstijn, has had a quiet preparation for Rotterdam, with no major competitions since she won the Pan American Championships in Buenos Aires in March, apart from winning the Cuban title, which is in itself not an easy task.

Maybe a surprise could come from Brazil. Rafaela Silva (BRA) became world junior champion in 2008 and has performed well in the seniors. She won the World Cup in Madrid last June and followed with two bronze medals in her own country at the Grand Slam of Rio and World Cup in Belo Horizonte, and she has already beaten experienced judoka such as Corina Caprioriu (ROM) and Ribout.

Those with an outside chance include Leila Latrous (ALG), who just turned 30 but still became African Champion for the fifth time, and Kifayat Gasimova (AZE), who was in fine shape in the spring of 2008, but lost in the first round at the Olympic Games.

She has kept a low profile since then, not taking part in any major tournaments this year, so she is a mystery, but does have all ingredients to perform on the day: remember the victory of Quintavalle in Beijing.

The U57kg class is extremely tough to call this year. If Olympic champion Quintavalle wins her first match she will face European Champion Telma Monteiro.

Meanwhile Kaori Matsumoto and Sarah Clark will fight each other for the first time, while African Champion Leila Latrous is matched to Greece’s Ioulietta Boulouvala (GRE) who recently found her form winning the Mediterranean Games in Pescara. She already won the Tournoi de Paris in February.